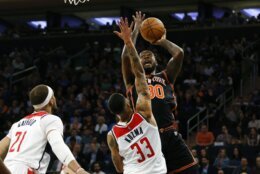 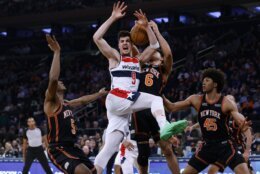 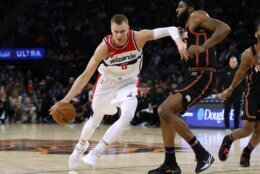 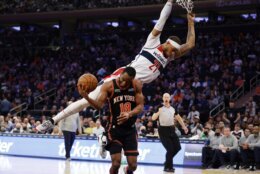 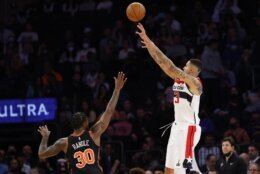 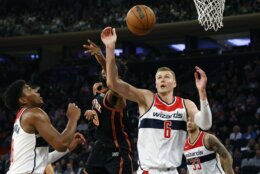 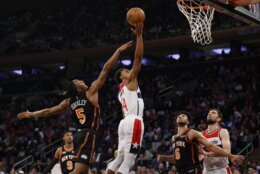 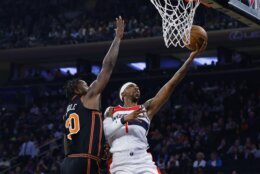 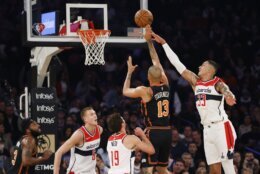 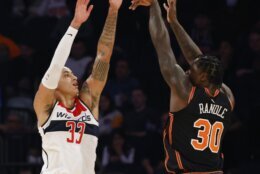 Kentavious Caldwell-Pope missed a potential game-tying 3-pointer at the buzzer for the Wizards, who have lost their last six games.

Mitchell Robinson had 15 points and 12 rebounds, Evan Fournier scored 15 points and Alec Burks added 12 as each of the Knicks’ starting five scored in double figures.

New York struggled from the field, shooting just 34.4% (31-for-90). It showed down the stretch as the Knicks missed their last seven shots, allowing the Wizards to make it a one-point game after trailing by 15.

“It shows you no lead is safe,” New York coach Tom Thibodeau said. “(Kyle) Kuzma threw in some deep 3s and that could happen in this game. And then we missed some bunnies, we missed some open shots, and then you’re fighting for your life.”

The Knicks have won their last two games, both at home, after losing their previous two on the road.

“It was a good win, we’ve just got to finish the games better,” Randle said. “Obviously, we don’t want to put ourselves in that position to finish the game that way. But we did. We got some stops. Got some good rebounds.”

It was Porzingis’ second game back at Madison Square Garden after New York traded their fourth overall pick in the 2015 draft to Dallas on Jan. 31, 2019.

He was booed during the pregame introductions, was jeered each time he touched the ball, and had thoughts about taking the game-winner before Pope misfired from the wing.

“I enjoy playing at MSG, whether it was at home before or now on the road. It’s always entertaining, the biggest stage and receiving the boos,” Porzingis said. “It is what it is. It’s in the past now. I love the city. I miss this city a lot. I miss a lot of people here. It is what it is. But I really enjoyed my time here and I only have good memories from this place.”

New York took its largest lead of the night at 96-81 on Barrett’s 3-pointer with four minutes left in the fourth quarter.

Washington called timeout and then answered with 16-2 run, capped by three 3-pointers from Kuzma, including his last that made it 98-97 with 42.4 seconds remaining.

On the next possession, Barrett missed a shot as Porzingis extended his hands and grabbed the rebound.

Instead of taking a timeout, Wizards coach Wes Unseld Jr. wanted Kuzma to attack the Knicks defense and maybe draw a foul.

Kuzma had a chance to give the Wizards the lead, but missed a 3 with 6.6 seconds left.

“That’s the question you play in the back of your mind, do you take a timeout and let them set their defense or you got a stop and you go,” Unseld Jr. said. “The thought was to attack downhill and I know he settled. He hit several in a row. So, he’s feeling a little bit, but I prefer him to get downhill and maybe get to the line or collapse the defense.”

Porzingis then fouled Barrett, who hit a pair of free throws to extend New York’s lead to 100-97 with 4.9 seconds remaining.

Randle and Immanuel Quickley combined to score 25 points in the first half for New York, which led 54-47 at the end of the second quarter. The Knicks shot 43% (14 for 44) from the field despite shooting 5 for 15 beyond the 3-point line.

Wizards: Washington had won 22 of its last 29 games against New York.

Knicks: Forward Feron Hunt was signed to a two-way contract Friday. He was averaging 17.8 points and 7.6 rebounds in 37 games, all starts, with Dallas’ G League affiliate, the Texas Legends. … Of Randle’s 17 rebounds, 16 came on the defensive end. … Quickley hit each of his nine free throws. … The Knicks outrebounded the Wizards, 60-38.