Bulls alone in 5th place after 107-94 win over Wizards

DeMar DeRozan scored 14 of his 32 points in the fourth quarter, and the Chicago Bulls pulled away for a 107-94 victory over the Washington Wizards on Tuesday night.
Listen now to WTOP News WTOP.com | Alexa | Google Home | WTOP App | 103.5 FM
(1/4) 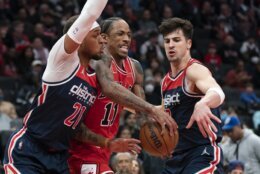 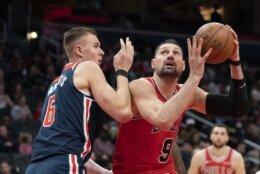 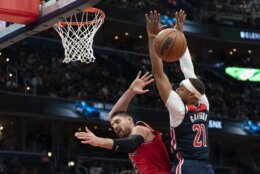 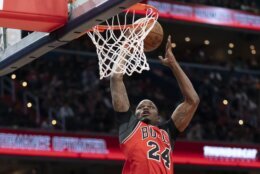 WASHINGTON (AP) — DeMar DeRozan scored 14 of his 32 points in the fourth quarter, and the Chicago Bulls pulled away for a 107-94 victory over the Washington Wizards on Tuesday night.

Nikola Vucevic scored 27 points for Chicago, which is trying to stay in the top six in the Eastern Conference and avoid the play-in round of the postseason. The Bulls (44-32) took a half-game lead over Toronto (43-32) for fifth place in the East, and they lead seventh-place Cleveland (42-33) by 1 1/2 games.

Chicago has played 12 of its last 15 on the road, but the Bulls now have only six games remaining in the regular season — and the next five are at home.

Rui Hachimura scored 21 points for the Wizards, who had their modest two-game winning streak snapped.

“He was really good, his level of aggression,” Washington coach Wes Unseld Jr. said. “Once again the quick decisions, I think he’s getting better in that area.”

The Bulls rebounded from a loss to the New York Knicks the previous night, and they overcame a scoreless first half from Zach LaVine, who finished with 14 points. DeRozan was just 2 of 12 from the field at the half, but he went 10 of 15 in the second.

“I don’t let missed shots discourage me,” DeRozan said. “I’ve learned to have a short-term memory when it comes to missing shots. You’ve just got to keep going.”

Chicago led 75-73 after three quarters, but the Bulls made their decisive run early in the fourth. DeRozan’s breakaway dunk made it 90-80 — the first double-digit lead for either team — and Chicago comfortably closed the game out from there.

“DeMar did a great job today, shot the ball good. We just needed to adjust better,” said Deni Avdija, who scored 14 points for the Wizards. “I think overall our defense was good today. Just those little details, those small ones, you need to stay focused and continue to fight until the end.”

Vucevic scored 20 points in the first half, and the Bulls led 51-46 after two quarters.

Bulls: Javonte Green scored nine points on 4-of-4 shooting. That included a one-handed dunk in the second quarter and an alley-oop moments later. … Vucevic scored all his points in the first three quarters.