Former GW star Pops Mensah-Bonsu was chosen to lead the Wizards' new developmental team, both because of his experience with the league and his connection to D.C.
Listen now to WTOP News WTOP.com | Alexa | Google Home | WTOP App | 103.5 FM
(1/4) 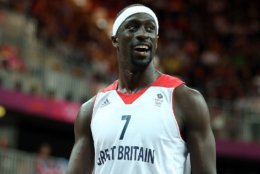 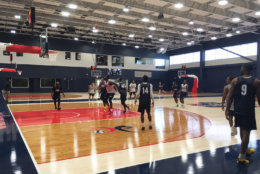 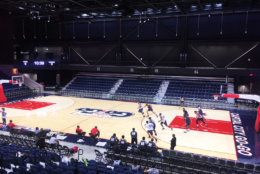 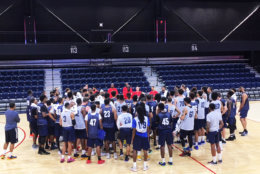 WASHINGTON — Sometimes, the obvious decision is too obvious.

The Wizards could have overthought it. They could have looked at Pops Mensah-Bonsu — the 35 year-old former George Washington star who has lived in D.C. since college, throughout his NBA playing career and the last three years as a pro scout for the San Antonio Spurs — and decided to go another direction to find the general manager for their new developmental league team, opening play in the brand new Entertainment and Sports Arena this fall.

For his sake, Mensah-Bonsu couldn’t be happier that they didn’t.

“This is something I aspire to be, and I didn’t know it would happen so soon,” he told WTOP in an interview the week before the team held an open tryout. “I was surprised that it happened when it did, and I’m just glad that I’m in this position.”

Nana Papa Yaw Dwene Mensah-Bonsu was born in England to Ghanaian parents, but became a household name around D.C. in the early 2000s, manning the paint for the Colonials. While he’s young for a front-office position with as much authority as the one he is stepping into, it’s one he has been preparing himself for since retiring from his playing days. Fittingly, “Papa,” as it does in English, means “father” in Twi, the primary language of Ghana, where Mensah-Bonsu’s family is from.

“I’ve seen the G-League from pretty much every angle you can see it from as a player,” said Mensa-Bonsu, who played in the league as both a rookie prior to reaching the NBA, and a veteran looking to break back in. “I kind of understand what it takes to be in that element, and that’s one way I feel like I can help the players.”

Despite his foreign roots, he’s also lived in Washington for a while now, purchasing a house in the city eight years ago. That’s important for his role, which is more than just a basketball talent evaluator. While the goal of any developmental league is to, well, develop its players, Mensah-Bonsu sees the larger vision of connecting with the oft-overlooked Ward 8 community in which the new arena sits.

“We’re not called the Capital [City] Go-Go for no reason,” he said. “We don’t take that lightly. We really want to embody that name and really represent the city and the people of that area in Congress Heights.”

Part of that means having actual locals on the team. Every G-League team holds tryouts, which are often simple promotional vehicles to drum up attention and make a little cash. But Mensah-Bonsu insisted that not only did he have high expectations for his team’s tryout last Saturday, but that there were roster spots waiting and ready to be claimed for the team’s inaugural season.

Mensah-Bonsu said he’s been getting direct messages over social media ever since it was announced he’d be taking the position, including from some “interesting names” (though he declined to elaborate further).

“It dawned on me that this area has a wealth of basketball talent,” he said. “I’m looking forward to having a few local guys on the team. That’s just going to be better for the community, better for fan engagement, better for local guys, too.”

More than a hundred hopefuls showed up at the new Entertainment and Sports Arena in Ward 8 Saturday looking to claim one of those spots. And though Mensah-Bonsu won’t know for a while who will actually see the floor in a Go-Go — and, possibly, a Wizards — jersey, he knows such things are possible.

In San Antonio, he witnessed the rise of Jonathan Simmons, from an also-ran who had to borrow $150 from his mother to attend the tryout, to a G-Leaguer, to an NBA player making millions. Simmons is obviously the exception, but he’s proof of what might be possible in Washington as well.

“Those are the kinds of things that make the G-League special,” he said. “I would love to have a story like that, to give a guy an opportunity … To give somebody the opportunity is what this is all about.” 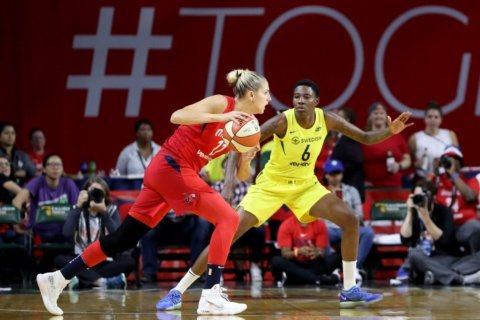 Mystics’ historic season ends in disappointment, but with optimism for future