WASHINGTON — It’s full speed ahead for the Washington Wizards going into the 2015-16 NBA season — literally. Already geared up to run with John Wall running the show, the goal for the Wizards is to play at an even faster pace and go even farther in the playoffs.

The Wizards bring back a core group — led by Wall, Bradley Beal, Marcin Gortat and Nenê — that has not only made the playoffs the last two seasons, but advanced to the NBA Eastern Conference Semifinals each year. The Wizards’ 46-36 record last season was the team’s best since 1978-79. Yet still, in a preseason survey of NBA general managers the Wizards were projected fifth in the Eastern Conference.

“The last two years we lost in Game 6 and I still have that in the back of my head,” said Beal.  “We have a target on our backs, but at the same time I don’t feel like we still have the respect we should have. We have to go out and earn it and we have a team that can get over the hump. It is all about desire and we have that.”

What’s next for the Wizards

The Wizards no longer have veteran forward Paul Pierce and his experience and ability to make clutch shots. While Pierce has returned to his hometown of Los Angeles to play for the Clippers, the Wizards are moving on with a younger team, an emerging Otto Porter and an emphasis on smaller lineups.

The true measure of the Wizards’ success will begin Wednesday in Orlando when the games count, but there have already been encouraging signs. Building off their playoff success in a sweep over Toronto last spring when a smaller lineup was used, the Wizards finished the preseason with the highest offensive rating in the NBA.

“Teams moving their small forwards or going smaller, and having a stretch-four, and spreading the court is the way the NBA is going,” said Wall, who is entering his sixth season in the league and is coming off a campaign where he averaged 17.6 points, 10 assists, 4.6 rebounds and 1.7 steals per game.

The Wizards averaged 106.8 points per 100 possessions and ranked fourth in pace-of-play in the NBA during the preseason with 104.5 possessions per 48 minutes. On made or missed baskets by the opposition the Wizards are going to push the ball. Several times this preseason the Wizards scored with three passes up the floor after giving up a basket.

“I wanted more versatility,” head coach Randy Wittman said. “I think a strength of ours for the last couple of years has been our ability to be more physical than some teams. We are still going to do that, but we have to have the ability to play like we played in the playoffs and have guys that can spread the floor out.”

To that end, the Wizards added Gary Neal to give Beal a true shooting guard as a backup for the first time since he came to Washington. Jared Dudley and Alan Anderson were also brought in to play multiple positions including shooting guard, small forward, and even power forward, depending on the lineup.

Dudley is coming off back surgery and appeared ready to play at the start of training camp. He had to wait for final clearance from the medical team and played the final two preseason games. Anderson had ankle surgery in the offseason and then had to have another surgery on the same ankle earlier this month and will miss the start of the regular season.

In the 2015 NBA Draft, the Wizards used the 15th overall pick on Kelly Oubre Jr., a 6-foot-7 forward out of Kansas who will have time to develop. As expected, Oubre had up and down moments in preseason, but he was able to use his 7-foot-2 wing span to be disruptive on defense. In the preseason finale against Toronto, Oubre had three steals and one blocked shot.

The trick for the Wizards will be to maintain the defensive intensity that has become the foundation of the team since Wittman took over in January of 2012. Wittman is always searching for the right combinations and has been open to adapting and changing, but he remains committed to the principle that it all starts on defense first.

Last season, the Wizards established a new franchise record for defensive field goal percentage, holding opposing teams to 43.3 percent shooting from the field to rank second in the NBA. The Wizards were 39-10 when holding opponents under 100 points and started the season 15-0 when keeping teams under the century mark for the first time since the 1977-78 season.

If a Wizards player gets open, chances are that Wall will find him. Last season, Wall and Chris Paul were the only players in the NBA to average at least 17 points, 10 assists and 4 rebounds per game. Wall led all guards with 44 games of at least 10 assists. He has worked hard over the past five years to develop his shot, scoring at least 30 points five times last year.

“I’d be lying to you if I said five years ago when he was a rookie that he would be at the point he is today — I couldn’t tell you that,” said Wittman, who was a Wizards assistant coach when Wall was drafted. “Number one, it’s satisfying to see his growth, not only as a player but as a leader. Everyone is kind of asking what veteran is going to step up, nobody considers (Wall) a veteran. This is his sixth year.”

Joining Wall in the backcourt for a fourth season is Beal. Staying healthy is a priority for him, after missing 19 games last season because of injury. At 40.9 percent, Beal finished ninth in the NBA in three-point field goal percentage and will be looking to take more threes instead of long two-pointers, after hitting only 33 percent of his shots between 16 feet out and the three-point arc.

“I’ve never had a problem with his shot selection,” Wittman noted of Beal. “It’s now a matter of not just being a catch-and-shoot player. But he has the ability to pull up and attack the rim, which we saw. You go from 15 points a game to 19 by getting to the free throw line.”

Off the bench, Ramon Sessions has emerged as strong reserve for Wall. In the preseason, Sessions had an impressive six-to-one turnover ratio, and the Wizards still finished with 31 assists in a game against Milwaukee.

In the preseason, the Wizards used a starting five with Wall and Beal in the back court, Gortat at center and Porter and Kris Humphries at forward for the most part. Nenê was used coming off the bench, but that could change depending on matchups. It is important to be able to adjust and adapt with lineups in a changing league.

“It’s going (to create) more space for me or Nenê to play under the basket,” Gortat said of the Wizards’ ability to go small and spread the floor. “If we’re going to play four guys outside and one inside, it’s going create a lot of opportunities for me to play pick and roll with John, and I’m looking forward to that.”

The Wizards are also looking forward to unveiling Humphries’ increase in shooting range in the regular season. In 11 seasons in the NBA, Humphries has gone only 2-of-26 from beyond the arc. In the 2015 preseason, Humphries, who worked on his outside shot during the off season, was 20-of-54, good for 37 percent from three-point distance.

It will also be an important season for Porter, who seized the opportunity of more playing time in the 2015 Playoffs. There was concern about Porter’s lack of progress until he averaged 10 points and eight rebounds per game in 10 playoff games last spring. In the preseason, Porter picked up where he left off, and the team continues to embrace his talent for moving off the ball.

The Wizards believe they have the winning formula. Strong defense is the Wizards’ cornerstone. The offense can be physical when required, but more often than not will play fast, place an emphasis on spacing, and a premium on three-point shots. 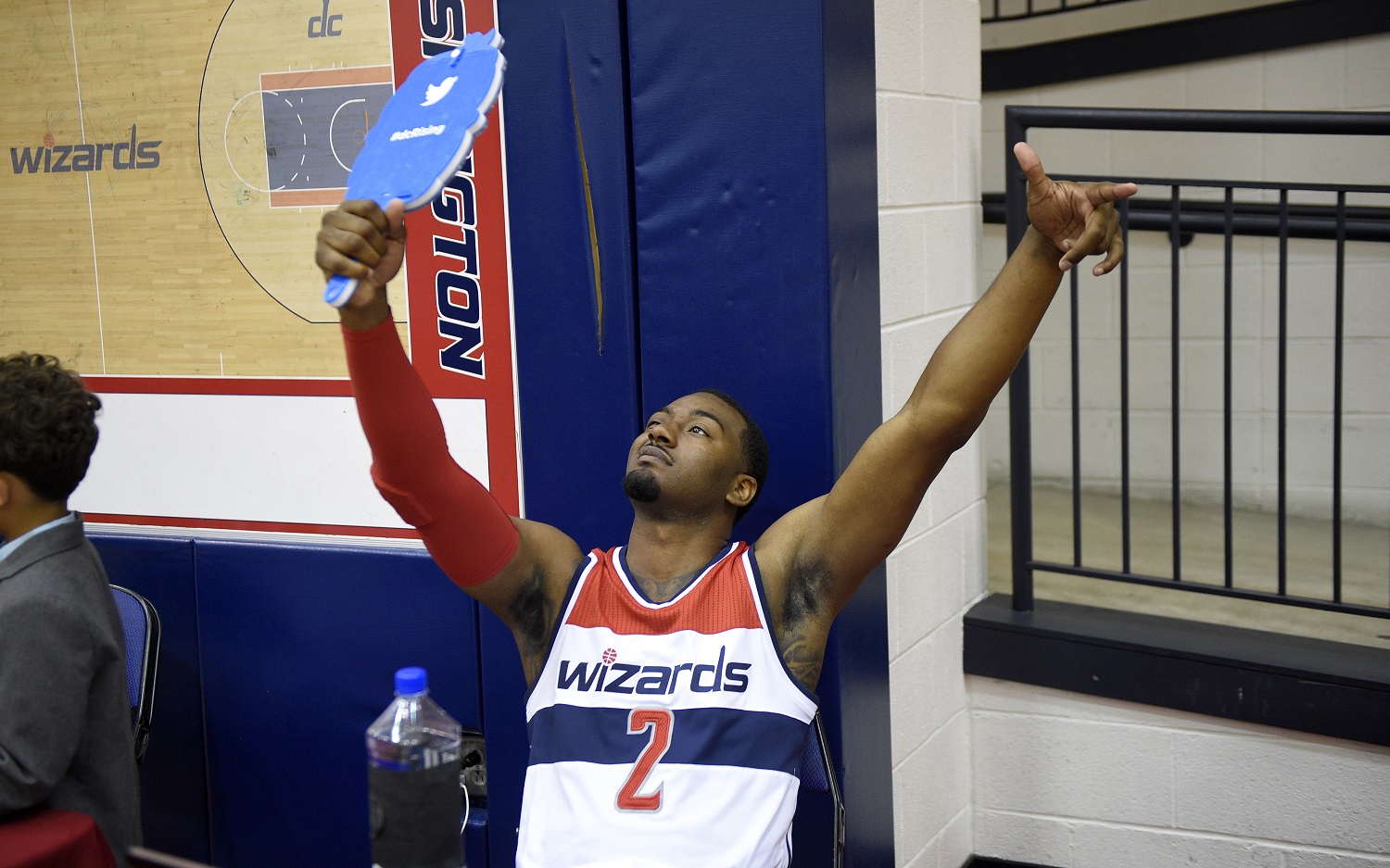