What the Wizards need in the season’s second half

WASHINGTON — As the Washington Wizards are already 54 games into an 82-game slate, the All-Star break isn’t exactly the…

WASHINGTON — As the Washington Wizards are already 54 games into an 82-game slate, the All-Star break isn’t exactly the halfway point. But it’s a good opportunity to evaluate the strengths that have gotten them this far and address the weaknesses that may have kept them from doing better.

And nobody is better for that job than the man who sees the team every day, through all the ups and downs — radio play-by-play man Dave Johnson.

We spoke with Dave before the season began about the Wizards’ prospects in 2015, and it’s worth looking back at what he had to say then. He highlighted the re-signing of Marcin Gortat as the biggest offseason move and the acquisitions of Paul Pierce and Kris Humphries as potential sleepers to keep an eye on. So, how have his predictions panned out?

Gortat has been somewhat inconsistent, but he’s scored in double digits 35 times (including 14 double-doubles) and is averaging 11.6 points and 8.1 rebounds per game. More crucially, Pierce and Humphries have both exceeded expectations, with the former becoming the go-to shooter late in games and the latter ascending to arguably the strongest player on the bench.

“Specifically as they reached midseason, I think that any question about what Paul Pierce can bring to this team has been answered,” says Johnson. “Whether or not he’s the leading scorer, or scoring often in games, that big shot, when you have to have it, he makes it. Even though he was 1-for-8, the second shot he made that night was the shot that made it a two-point game in the fourth quarter. Or he’s getting that defensive rebound that wins you a game against Cleveland. Or he’s taking a charge in the second overtime with four fouls; he’s taking a charge that helps you win that double overtime game against the Celtics.”

Losing Trevor Ariza was tough, but while Pierce’s raw numbers are slightly lower, he has actually been even more productive while on the floor, averaging more points, rebounds and assists per 36 minutes than Ariza did last season.

As for Humphries, he has provided an unexpected spark as the third big man.

“All the focus was on Paul Pierce coming here, and he kind of flew under the radar,” Johnson says of Humphries. “But he changes the game — and has changed games when he comes in — with his defense, with his energy, with his rebounding, and he can score as well.”

Thanks to Humphries’ contributions, Washington ranks third in the league in both defensive rebounding percentage (77.9 percent) and total rebounding percentage (52.0 percent). By taking away second chances, they have limited opponents’ scoring opportunities, helping their defense improve. That’s been the biggest improvement Johnson has seen over last year team-wide.

As a whole, the Wizards’ Team Defensive Rating is fifth-best in the league, behind only the Warriors, Bucks, Blazers and Spurs.

Washington went 25-1 in its first 26 games in which it held opponents under 100 points. However, the Wizards have lost three of their last five under the same circumstances, prompting some worry. The 33 wins are obviously nice, and place the Wizards in the fourth spot in the Eastern Conference, just a game behind the third-seeded Bulls. But a breakdown of Washington’s record raises some eyebrows.

Washington has done its job against the league’s bottom-feeders, torching teams currently outside of playoff position to the tune of a 23-4 record. But in the other half of their games, played against teams currently in position to make the NBA’s second season, the Wizards are just 10-17. And half of the four losses against non-playoff clubs have come against the Oklahoma City Thunder, a squad likely to find their way to the postseason now that their stars are healthy.

Johnson is less worried about the competition, and more about taking care of business at the Verizon Center.

“They had eight losses the first two months of the season (November and December combined), and they had eight losses in January,” he recalls. “Was the schedule tougher that part of the season? Yes. But part of that was they had a five-game road trip and a four-game road trip. In good seasons or bad seasons, life on the road is difficult. You’re supposed to be a .500 team on the road and much better at home.”

There is also good news hidden within Washington’s splits. The Wiz are 7-3 in games decided by three points or less, the most wins of any team in the league. You could chalk some of that up to luck, but closing out close games is imperative in postseason series, as Washington saw first-hand last year with two of their four playoff wins over Chicago coming by three or fewer points. Conversely, two of their four losses to Indiana the next round were decided by four points or less.

Washington certainly still has room for improvement. The Wizards still turn the ball over too much — on 15.5 percent of their possessions, eighth-worst in the league. That’s why even though Wall leads the league in assists, the team ranks just 11th in assist-to-turnover ratio. They average 15 a game as a team (25th in the league), but have committed 19 and 20 in two of their three losses to Atlanta.

But the fact that they haven’t played their best ball yet is exactly why Johnson is encouraged.

“There’s still more that we can see out of this team, and they still have 33 wins,” he says. “The bigger concern is how you’re playing in April and the playoffs.” 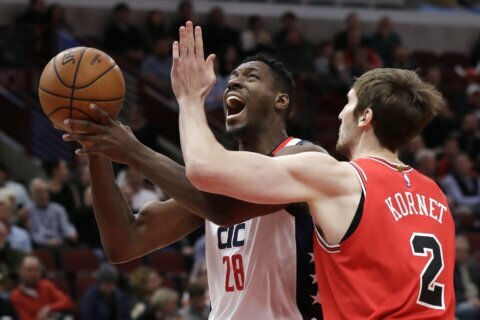