Redskins continue to focus on QBs as preseason opener approaches

As the first preseason game approaches, there is still plenty of uncertainty about which Washington quarterback will be behind center come the regular season.
Listen now to WTOP News WTOP.com | Alexa | Google Home | WTOP App | 103.5 FM

The Redskins returned to the field in Richmond on Sunday with somewhat of a low key practice after a spirited session on Fan Appreciation Day.

They will head to Cleveland for the preseason opener on Thursday where, if the first unofficial depth chart released by the team is accurate, Colt McCoy will get the start on Thursday.

Jay Gruden always downplays preseason depth charts, especially ones on Aug. 4, but this would seem to make sense for Thursday since Colt does have the most experience with this offense.

Case Keenum is listed second followed by Dwayne Haskins. Also not a surprise.

Sunday was not the best day for all three. All were pretty inconsistent during team periods, but Gruden has seen some good and bad.

All three have gotten almost equal time throughout camp and Gruden seems to like the way the competition has been going.

“That’s just the way it is at the quarterback position,” he said. “Colt’s got the most experience in the system, but he still hasn’t played a whole lot. He hasn’t taken a lot of reps. Last year it was all about Alex [Smith], the year before that it was all about Kirk [Cousins], and getting them ready. He’s never really worked with the starting team a whole lot. . Case has all the reps, but he doesn’t have much experience in the system. He’s doing a nice job and obviously Dwayne is a rookie. All three of them have shown flashes of being really good and really productive and all three have shown flashes of, ‘Hey, we’ve got to get better.'”

Wide receiver Paul Richardson echoed what a lot of the receivers have said throughout camp as far as their impressions of the quarterbacks.

“I think Haskins is young. He’s doing well,” he said. “They’re finding ways to find him comfortable back there and letting his arm loose a little bit. Case is a good vet that we have. He’s trying to find his leadership role as he’s grasping the playbook. You know you got Colt, who has been in the offense for a while. He knows the offense. He has really good leadership qualities and I think that they have a healthy competition going on.”

Gruden doesn’t seem to have an answer yet about how he will split up the playing time for each quarterback during the preseason.

While Gruden knows there’s still a month before the opener, he would like to make decisions on starting positions sooner than later.

“I think the beauty of it is we still have a lot of time, but we do want to try to hone in our starters at every position as soon as we can, so we can get them working together,” he said. “Unfortunately, that probably won’t happen until probably preseason game number three with a lot of spots.”

Week three of the preseason could be realistic for a lot, but quarterback could take a bit longer. Either way, it sounds like all three will have plenty of opportunity to state their case beginning on Thursday. 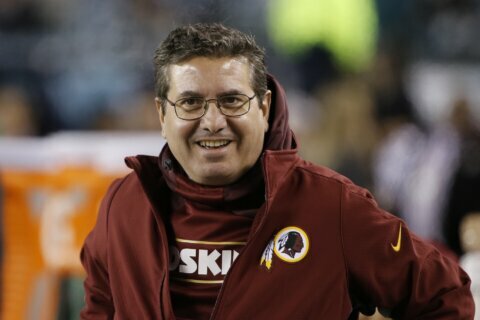