Nationals Notebook: Picking up the pieces and going home

As the year wraps up and the Nationals finish 55-107 — for their worst mark since moving to D.C., we let the dust settle quickly before moving on. And it’s been quite a year, with the departure of future franchise-cornerstone Juan Soto — two-plus years before free agency.

Ain’t Missing You: Sometimes both parties are hurting after the breakup. Juan Soto finished the season by hitting .236 for San Diego after batting .246 for the Nats.

It was worse for Josh Bell, who batted .192 out west after hitting .301 with the Nats (he was the team’s leading hitter before his plate appearances no longer qualified). Runs scored projected over 162 games (82 to 79) didn’t take that much of a hit, but his other numbers cratered: 38 doubles to 15, 22 homers to 9 and 90 RBI to 43. Have fun facing the Dodgers!

Digesting the Division: Atlanta (101-61) only needed to win one game to wrap up the NL East and they did so — owning the tiebreaker over the New York Mets (101-61), who were in first place for the first 138 games of the season and 176 days overall.

There’s no banner for that — only the wild card round. And 101 regular season wins is no guarantee of advancing in the postseason, as we learned Sunday night. Philadelphia (87-75) finished a game ahead of Milwaukee for the final playoff spot, and swept NL Central champ St. Louis (it feels like the No. 6 team always beat the Central champ when the NFL expanded its playoffs too). They face Atlanta in the NLDS.

Miami (69-93) finished with the record I thought the Nats would post at the beginning of the year as Don Mattingly steps down from the Marlins’ dugout, while the Nationals (55-107) take last place for the third straight year.

Birds Learning to Fly: No, they don’t give banners for “most improved” — but one needs to tip the cap to the Orioles, who recorded their first winning season since 2016.

Last Week’s Humbled: Starting pitching was an issue all season and for rookie Cory Abbott to post the best outing after allowing four runs over four innings says something.

Erick Fedde allowed nine runs over 2.2 innings and Paolo Espino got one out, while being charged for five runs (doing the math that is an ERA of 189.0 for that start). Luke Voit ended the season in a 1-for-12 slump (. 083), while Lane Thomas’ 1-for-11 dipped his season batting average to .241.

Hunter Harvey had the best ERA out of the bullpen at 2.52, while Tanner Rainey led the club with 12 saves.

Keys for 2023: Pitching, pitching, and more pitching. They need to get some quality arms in-house to move guys like Erick Fedde and Josiah Gray from the 1-2 or 2-3 spots in the rotation to 3-4 or 4-5.

Sadly, the Nationals can’t expect to get anything at this point from the oft-injured Stephen Strasburg, who has pitched 31.1 innings since being named World Series MVP (he tossed 36.1 innings in the playoffs that October).

Perhaps Carter Kieboom comes back after having Tommy John surgery to claim the spot they were hoping he’d claim in 2020? 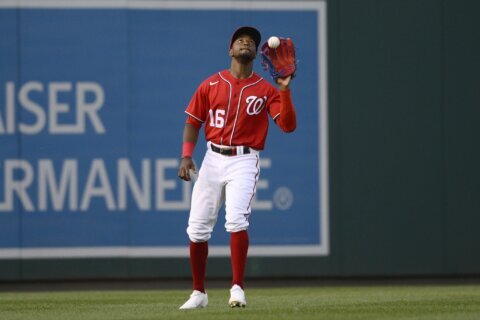