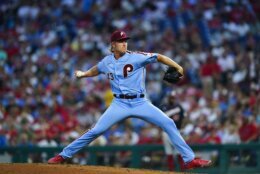 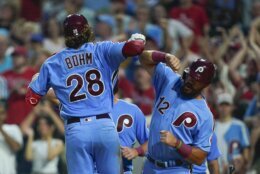 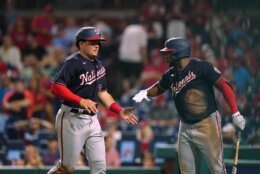 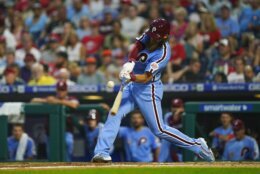 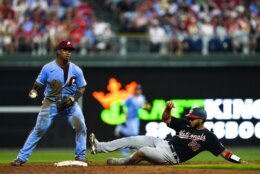 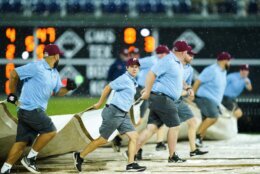 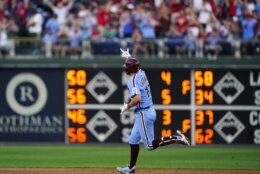 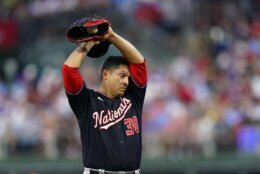 Rhys Hoskins also went deep, helping secure a victory for Syndergaard (6-8) two days after he was acquired from the Los Angeles Angels.

The Phillies began play a half-game ahead of St. Louis for the final NL wild-card spot. They have won seven of nine against Washington this season.

Luke Voit and Yadiel Hernandez each had two hits for the Nationals, who dropped to an MLB-worst 36-71 while playing their third game since trading star slugger Juan Soto. The 2019 World Series champs have dropped six of eight.

“Bummed,” Nationals manager Dave Martinez said. “We had some good, positive energy going there. We were swinging the bats well. But you can’t do anything about Mother Nature.”

The Phillies reinstated second baseman Jean Segura from the 60-day IL prior to the contest. Segura missed 54 games with a broken right index finger.

Philadelphia also is looking forward to getting back 2021 NL MVP Bryce Harper, who had pins removed from his broken left thumb Monday and expects to be back before the end of the regular season. Harper is taking swings off a tee and hopes to return in September, he said before the game. He spent Thursday cheering on his teammates from the broadcast booth, where he provided commentary.

Harper loved what he saw early in the contest from Philadelphia’s offense.

Hoskins connected for his 21st homer of the season in the first off Paolo Espino (0-4), and the Phillies scored four runs in the third to jump out to a 5-2 lead. Newly acquired center fielder Brandon Marsh opened the frame with the first of four straight hits, a single to left.

Kyle Schwarber followed with a single before Hoskins drove home Marsh with another one. Bohm, whom Harper was talking up in the booth for his improved defense and steady offense, provided the big blow with a three-run shot to left.

“That’s what this offense can do,” Hoskins said.

Syndergaard struck out two and walked none over five innings. His 11 hits allowed were one shy of his career worst.

“Once I settled down, I was able to execute my pitches,” he said. “It feels really good to get a win.”

Just after Syndergaard departed in the fifth, the game was halted by rain. It was called after a delay of 2 hours, 6 minutes.

The Nationals pulled within 5-4 with two runs in the fifth. After consecutive singles to open the frame, César Hernández’s RBI single plated the first run. With the bases loaded, another run scored on a wild pitch. Nick Castellanos prevented further damage with a strong throw from right field to the plate to get Hernández on an inning-ending 9-2 double play.

“At that moment, it was huge,” Syndergaard said. “It turned out to be bigger than it was.”

Said Martinez, “We took a shot right there, but the throw was right on the money.”

Voit put the Nationals ahead 1-0 with an RBI single in the first in his initial at-bat after joining Washington as part of the return package from the San Diego Padres for Soto and first baseman Josh Bell.

Espino gave up five runs on seven hits in four innings with three strikeouts and no walks.

Syndergaard struck out 777 in 718 innings, including fanning 218 during his 2016 All-Star season, during six seasons with the New York Mets. But several injuries, including Tommy John surgery in 2020, have taken some of the power from his arm. From the first pitch of the contest, a screeching foul ball to the press box level by Victor Robles, the Nationals connected on several hard-hit balls — both hits and outs against the 6-foot-6, 230-pound right-hander. Through 85 innings this season, he has 66 strikeouts for the Angels and Phillies.

Yadiel Hernandez extended his hitting streak to a career-best 10 games with a third-inning single. He is batting .371 with five RBIs during the streak.

To make room for Segura, the Phillies released veteran shortstop Didi Gregorius. In 2½ seasons with Philadelphia, Gregorius batted .230 with 35 doubles, 24 homers and 113 RBIs. His power numbers slipped this season, when he had one homer in 214 at-bats while hitting .210.

“It’s a difficult decision, but I think the right decision,” interim manager Rob Thomson said before the game.

Phillies: RHP Kyle Gibson was reinstated from the paternity list.