Jacob deGrom dazzled in his first major league start in more than a year, allowing one run on three hits and striking out six in five innings before a bullpen meltdown cost the New York Mets in a 5-1 loss to the Washington Nationals on Tuesday night.
Listen now to WTOP News WTOP.com | Alexa | Google Home | WTOP App | 103.5 FM
(1/14) 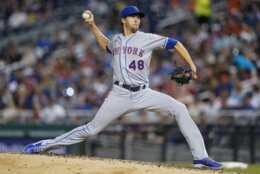 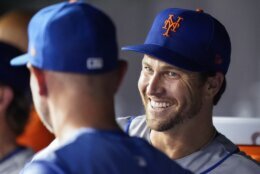 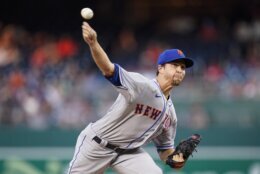 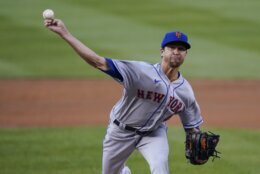 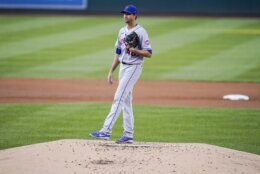 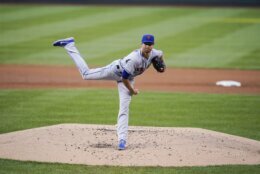 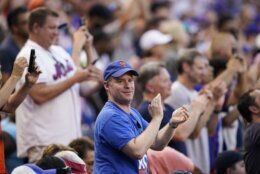 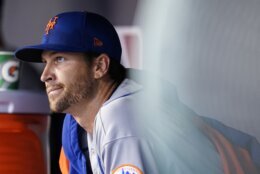 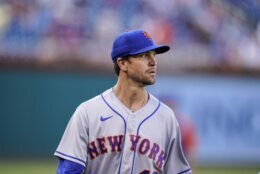 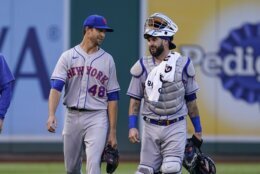 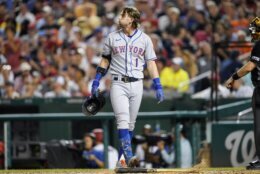 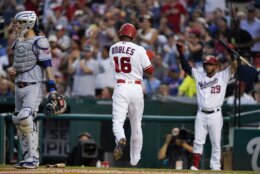 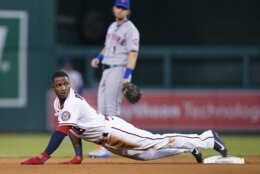 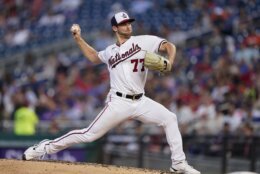 WASHINGTON (AP) — The nerves lasted longer than usual for Jacob deGrom. He was perfectly fine with that after waiting so long to get back on the mound.

Making his first major league start in more than a year, deGrom looked almost back to his Cy Young Award self. He allowed one run on three hits and struck out six in five innings before a bullpen meltdown cost the New York Mets in a 5-1 loss to the Washington Nationals that halted their season-high seven-game winning streak Tuesday night.

“To get out there and pitch and be healthy, that’s the reward,” deGrom said between smiles afterward. “The goal was to win a baseball game and we weren’t able to do that tonight, but to be out there and be healthy and feel good is definitely a good step.”

Sidelined for the second half of last season by an elbow injury and shut down late in spring training because of a stress reaction in his right scapula, deGrom got a standing ovation from a crowd full of Mets fans prior to his first game back in almost 13 months. Serenaded with applause when he delivered a 99 mph fastball on his first meaningful pitch since July 7, 2021, deGrom threw 46 of 59 for strikes before coming out of the game around the time the team planned for.

“His fastball was over 100, and his slider is nasty,” Washington manager Dave Martinez said. “I know that he’s still trying to build up, but his stuff was really good.”

The 34-year-old two-time NL Cy Young Award winner got all but one of his strikeouts swinging and was much sharper than his final rehab start in the minors last week when he allowed four runs in four innings on 67 pitches. He left with a no-decision after Francisco Lindor homered for the NL East leaders in the sixth, and criticized himself for making two mistakes in the fourth that added up to a Nationals run.

“That’s going to be part of this: not being out there in that long and getting a good feel for the stuff,” deGrom said. “Overall I felt like I was able to locate the ball where I needed to.”

Mets reliever Stephen Nogosek (0-1) took the loss after allowing a two-run homer to Luis Garcia and a solo shot to Yadiel Hernandez in the sixth. Yoan López also gave up a homer in the seventh, when he got big help from center fielder Brandon Nimmo on a diving catch to end the inning.

“What a play,” manager Buck Showalter said. “He’s been a lot of fun to watch and a joy to watch play baseball this year.”

New York’s lead in the NL East was trimmed to 2 1/2 games over Atlanta.

Making his first start of the season in the aftermath of the blockbuster trade that sent Nationals superstar outfielder Juan Soto and veteran first baseman Josh Bell to San Diego, Cory Abbott allowed two runs and struck out three in five shutout innings. Victor Arano (1-0) got the win in relief.

While the Nationals were selling, the Mets were buying at the trade deadline, acquiring right-handed power hitter Darin Ruf from the Giants and reliever Mychal Givens from the Cubs. New York sent DH/3B J.D. Davis and three pitching prospects to San Francisco for Ruf, and minor league pitcher Saúl González to Chicago for Givens.

Washington made no other moves aside from the blockbuster with San Diego and a trade Monday that sent utility player Ehire Adrianza to Atlanta for minor league outfielder Trey Harris.

WELCOME TO THE MAJORS

Joey Meneses, called up to the majors for the first time at age 30 to fill Bell’s spot on the roster, struck out against deGrom in his first at-bat and homered in the seventh. Although his time starting at first base may be short-lived with the arrival of first baseman Luke Voit, Meneses made some history by becoming the first Mexico-born player to homer in his major league debut.

“The emotions were amazing,” Meneses said. “I was a little bit in shock when I first realized what was going on. I didn’t know what to do. I was focused on getting my first hit in the big leagues, and luckily it turned out to be even better than that.”

Mets: RHP Trevor May (right triceps) could be activated as soon as Wednesday. He has been on the injured list since May 3. “I’m hoping that’s a good addition for us,” Showalter said. “Comparably speaking to some other things, if we get him back right, that’s a big piece to add to our bullpen.”

Nationals: Rookie LHP MacKenzie Gore, the furthest along of the five young players acquired from the Padres for Soto and Bell, will not get rushed back from elbow inflammation by a last-place team looking toward the future. Gore went on the injured list last week, though the injury wasn’t an obstacle to completing the trade after the Nationals got the thumbs up from their doctor. “We’re going to take it slow with him, for sure,” general manager Mike Rizzo said.

Ruf could make his Mets debut in the series finale Wednesday after coming over in a trade from the Giants. Chris Bassitt (7-7, 3.83 ERA) is set to start for New York against Aníbal Sánchez (0-3, 7.47).