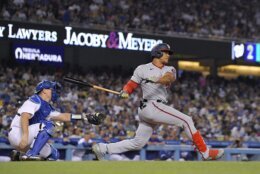 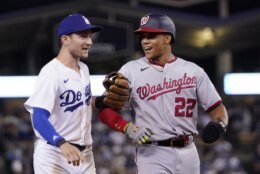 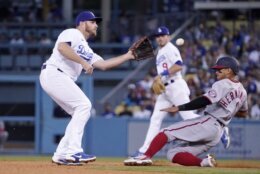 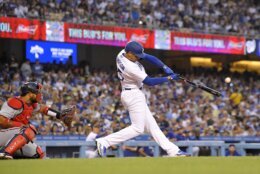 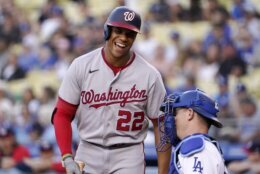 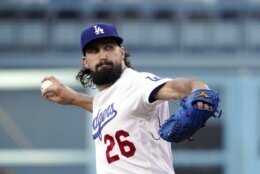 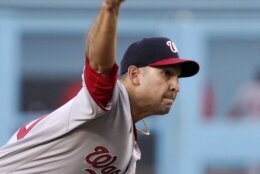 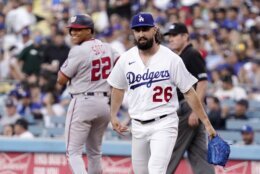 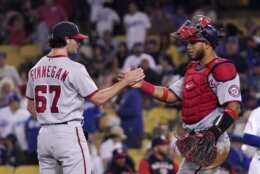 LOS ANGELES (AP) — Los Angeles Dodgers fans made their feelings known as Juan Soto stepped into the batter’s box, just in case the Washington Nationals star didn’t get their message at the All-Star Game.

“Future Dodger!” the crowd of 48,647 chanted. They heartily applauded Soto in his first at-bat.

Whether he ends up in LA or not, Soto put on a show.

“Our best player, Soto, comes up with a big hit and drove in some runs,” Nats manager Dave Martinez said. “It was a big moment for Juan to come through.”

The Nationals (33-65) brought the worst record in the majors into Dodger Stadium, where they won for the first time since the 2019 NL Division Series, against the team with baseball’s best record (64-31). The Dodgers’ season-high eight-game overall winning streak ended.

“They shut down a really good team,” Martinez said of his bullpen. “Guys played with a lot of energy.”

Soto said before the game he’s trying not to think about the trade talk swirling around him ahead of the Aug. 2 trade deadline. The chatter isn’t affecting him at the plate. Soto is batting .362 with a 1.260 OPS this month, including six homers, a triple and two doubles.

The 23-year-old All-Star right fielder left his trophy from winning last week’s Home Run Derby in the visitors’ clubhouse, knowing that he’d soon be back here. It rested on a wheeled trunk in the middle of the room with a gold link chain wrapped around it and Derby Champ spelled out in platinum.

The Nationals haven’t signaled that they’re looking to unload the left-handed hitter with a .248 average and .895 OPS. But that hasn’t stopped the growing speculation, especially after Soto turned down a long-term contract offer worth $440 million.

“We don’t need anything but I stand by any team can always get better,” Dodgers manager Dave Roberts said when asked about Soto before the game. “Juan is a very talented player.”

Soto finished 2 for 4 with a strikeout and a walk. He chatted up former Nats teammate Trea Turner, with whom he stays in regular contact.

The Nationals batted around in the fifth when Yadiel Hernández led off with an opposite-field solo shot over the wall in left that tied the game 1-1.

“It just created more excitement in the bullpen,” Hernández said through a translator.

After two quick outs, Tony Gonsolin (11-1) gave up four straight base hits in his first defeat of the season and his first start since taking the loss for the NL in the All-Star Game. Ehire Adrianza and Victor Robles singled back-to-back before César Hernández hit a bloop single inside the third-base line to make it 2-1.

“He still is terrific,” Martinez said of Gonsolin. “He’s got good stuff.”

The Dodgers had the tying runs on base in the bottom of the inning. Max Muncy and Gavin Lux singled back-to-back off Nats starter Paolo Espino. Andres Machado (1-0) came in to strike out Cody Bellinger before walking Trayce Thompson to load the bases. Mookie Betts took a called third strike and Turner lined out to right for the third out.

Kyle Finnegan pitched the ninth to earn his third save.

Washington loaded the bases in a messy eighth for Reyes Moronta, who threw 31 pitches and just 15 for strikes. He had two wild pitches and hit Keibert Ruiz before Robles struck out to end the threat.

The Dodgers had the potential tying run at the plate in the eighth. Turner and Jake Lamb singled before Carl Edwards Jr. struck out Muncy for the third out.

Hitting in the ninth spot, Thompson went deep with two strikes and two outs in the third for a 1-0 lead.

Turner’s ground-rule double to deep center in the fourth extended his hitting streak to 12 games. Freddie Freeman went 0 for 4 with a strikeout to end his 12-game hitting streak.

Dodgers: 3B Justin Turner (abdomen) could return Tuesday or Wednesday. … RHP Brusdar Graterol (shoulder) played catch but there’s no timetable for him to get on a mound. … OF Chris Taylor (foot) will have a rehab assignment next week. … RHP Walker Buehler (elbow) played catch for the first time since his flexor strain injury last month.

Nationals: RHP Josiah Gray (7-6, 4.40 ERA) makes his second career start against his former team. He made his MLB debut at Dodger Stadium last July against the Giants.

Dodgers: RHP Mitch White (1-2, 3.78) faces the Nationals for the first time in his career.