Nationals Notebook: Tough to win when you’re beating yourself

Have you ever tried to walk with a stone in your shoe? You deal with discomfort for the first few steps, eventually can't walk nearly as well — and forget about running.
Listen now to WTOP News WTOP.com | Alexa | Google Home | WTOP App | 103.5 FM

Have you ever tried to walk with a stone in your shoe? You deal with discomfort for the first few steps, eventually can’t walk nearly as well — and forget about running.

The Nationals are on pace to finish 54-108, which would be their worst record since moving to Washington. And they aren’t doing themselves any favors: the lineup has grounded into an MLB-high 37 double plays, the pitching staff’s 141 walks issued is second most in the majors, and the team’s 27 errors are the most in the big leagues.

It’s tough enough to compete with a rotation minus starters Stephen Strasburg and Joe Ross while putting together a lineup that, outside of Juan Soto and Josh Bell, isn’t scaring anybody. Still, this year’s team is beating itself daily.

Until they stop dragging themselves down, the Nationals will find it extremely difficult to climb out of the NL East cellar.

Digesting the Division — The first place New York Mets (23-13) finally lost a series in 2022, dropping two of three to Seattle. Second place Philadelphia (17-18) was close to getting over .500 for the first time since April 12 before wasting a 4-2 eighth inning lead Sunday at the Los Angeles Dodgers.

Bryce Harper (. 305 with nine homers and 27 RBI) continues to hit despite a partially torn UCL — while he can still hit, he can’t throw for four weeks. (Thank goodness for the universal DH.) Third place Atlanta (16-19) and fourth place Miami (15-19) each dropped two of three over the weekend, while the Nationals (12-24) did the same.

O’s Woes — The Birds (14-21) dropped three straight in Detroit after taking two of three in St. Louis (the first-ever Busch Stadium visit for the franchise that left St. Louis in 1953). They were held to three runs over the weekend by the Tigers’ pitching, not unexpected for a lineup that ranks 28th in the majors in scoring. Causes for confidence include a relief corps led by Cionel Perez (one earned run allowed in 10.1 innings this year), Jorge Lopez (two in 17) and Keegan Akin (four in 21).

Last Week’s Heroes — Nelson Cruz batted .364 with six RBI, while Juan Soto led the team with five runs scored while hitting two homers, one of which was his first homer this year with a runner on base. Erasmo Ramirez tossed 4.1 scoreless innings over three appearances, while Victor Arano tossed 2.1 scoreless frames of relief.

Game to Miss — Saturday, the Nationals are in Milwaukee and start Patrick Corbin (0-6, 6.28 ERA) against Brandon Woodruff (5.97 ERA). I will pass up this one, put on the madras jacket and breathable fedora, and enjoy the Preakness-even minus Kentucky Derby winner Rich Strike. 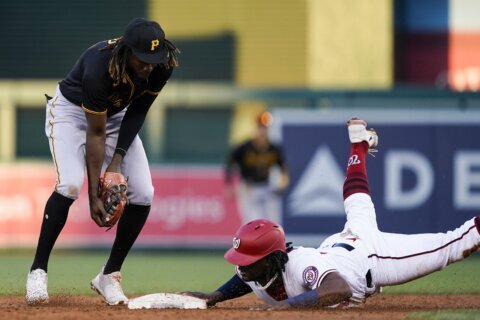