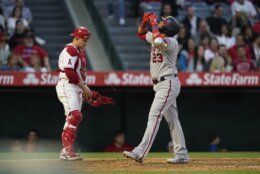 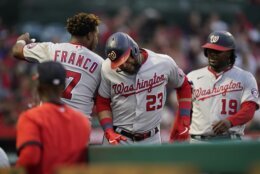 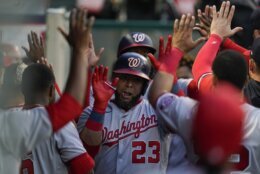 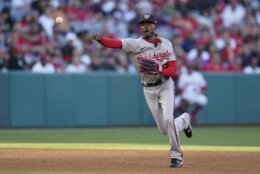 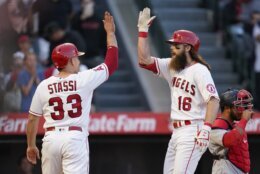 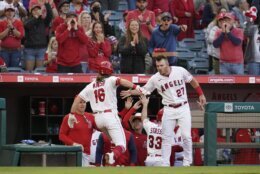 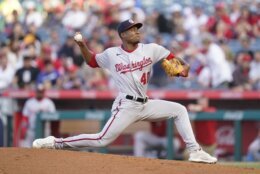 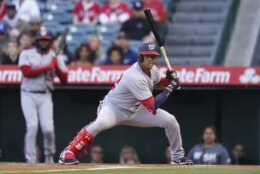 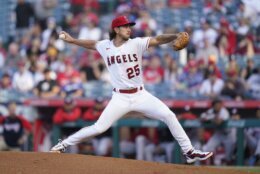 “Two things for me that stood out was we got the ball up and guys were on time throughout the whole game,” manager Davey Martinez said of the offense.

Josiah Gray (4-2) won his second straight start, allowing three runs and five hits in 5 1/3 innings. The right-hander, who was acquired from the Los Angeles Dodgers last season in the trade deadline deal for Max Scherzer and Trea Turner, also struck out three.

Jared Walsh and Brandon Marsh homered for the Angels, who had their three-game winning streak snapped. Walsh has five homers on the season including three in the past four games.

Gray has won four of his last five starts and was effective, except for allowing the homers in the fourth. The Angels went after Gray early the first couple innings, getting contact early in the count but not able to generate hits.

“I kind of figured that would be their approach. That’s probably going to be the approach for a lot of the teams is they’re going to try and get me early,” Gray said. “I’m trying to work on continuing to attack the strike zone. If they swing often, hopefully it’s a good pitch. And if not, then we got to work through some stuff.”

After being shut out 3-0 on Friday, Washington’s offense got back into the swing of things. They are batting .330 through eight games of their current road trip with nine home runs and 54 runs scored.

The Nationals lead the majors with six runs per game on the road (90 runs in 15 games) and a .300 away batting average.

“We were hitting balls hard (early in the season), we were just hitting them on the ground,” Martinez said. “Now the timing is getting a lot better, and they’re getting ready to hit every pitch. If we get the ball up in the zone, these guys are going to hit the ball hard. It’s all coming to fruition. We just have to keep it going.”

Bell and Hernandez both connected on cutters from Michael Lorenzen (3-2). Bell’s came on a full count with two out in the first inning and went into the rock pile in deep center for his fourth of the season. Hernandez’s cleared the wall in right-center to lead off the second inning.

The Nationals extended their lead to 4-0 in the fourth when Franco lined a bases-loaded base hit into left-center to drive in Bell and Hernandez.

The Angels closed within a run with three in the home half of the inning. Walsh hit a solo shot to right to get Los Angeles on the board. After Matt Stassi drew a walk, Marsh drove Gray’s fastball over the wall in deep center.

Washington responded with Cruz’s two-run shot to left when Elvis Peguero’s sinker stayed up in the strike zone. It is the 452nd homer of Cruz’s career, which is third among active players and ties him with Carl Yastrzemski for 39th on the all-time list.

Franco made it a four-run advantage with an RBI double in the sixth.

“We crawled back in it. I thought things were going to flip back the way we’ve been playing but it just didn’t happen,” Angels manager Joe Maddon said.

Lorenzen had won his last two starts but wasn’t as effective in his fifth outing of the season. The right-hander struck out seven, but allowed five runs and five hits in 4 2/3 innings.

“He was not as sharp. He didn’t really have the sinker working. It was disjointed,” Maddon said. “He did not have his normal patterns like we’ve seen. Overall, the mix of pitches wasn’t as effective.”

César Hernández’s 12-game hitting streak ended after he went 0 for 5. The streak was tied for the second-longest of his career.

Nationals: Dee Strange-Gordon got his first start of the season at shortstop after playing it often during a rehab stint with Triple-A Rochester.

Angels: C Kurt Suzuki was placed on the injured list due to an undisclosed reason with C Chad Wallach being called up. LHP Jhonathan Diaz was optioned to Triple-A Salt Lake after RHP Kyle Barraclough was promoted.

Nationals: RHP Erick Fedde (2-2, 4.68) tossed a season-high seven innings and allowed only one run in his last start, a 10-2 victory at Colorado on May 3.

Angels: LHP Patrick Sandoval (1-1, 1.29) has generated a swing and miss on 57.8% of his changeups this season. That is the highest rate for a starter in the majors.