LEADING OFF: Astros’ Baker goes for 2,000th win as manager

Astros manager Dusty Baker tries for his 2,000th win as a major league manager when Houston hosts Seattle. Only 11 skippers have reached the mark so far.

Baker is in his 25th season as a manager. He had previous stints with the Giants, Cubs, Reds and Nationals.

Padres right-hander Mike Clevinger is set to pitch in the majors for the first time since recovering from his second Tommy John surgery.

He’ll be back on a familiar mound, too. Clevinger will start against the Guardians at Progressive Field — he began his big league career with Cleveland in 2016 and excelled there until being dealt to San Diego before the 2020 trade deadline.

The 31-year-old Clevinger last pitched in the 2020 NL Division Series, starting Game 1 against the Dodgers and getting pulled after one scoreless inning. He missed last season after having elbow surgery.

Clevinger has made three starts in the minors this year with a 2.08 ERA. A friend of his, Zach Plesac, pitches for Cleveland against him.

Ohtani was held out of the starting lineup Monday, a day after the AL MVP exited because of tightness in his groin. He grounded out as a pinch-hitter in a 3-0 loss to the White Sox in Chicago.

Angels trainer Mike Frostad said Ohtani was “doing better this morning” and there were currently no plans for an MRI or to put the two-way sensation on the injured list.

Los Angeles opens a three-game series at Boston. Ohtani has played seven games at Fenway Park, going 10 for 30 with two home runs at the plate.

Giancarlo Stanton, Aaron Judge and the New York Yankees go for their 11th straight win when they take on the Blue Jays in Toronto.

Gleyber Torres had a go-ahead single in the ninth inning Monday to beat the Blue Jays 3-2.

This is the second straight season the Yankees have reeled off a double-digit winning string. They won 13 in a row last August.

Mets second baseman Robinson Canó has been cut with nearly $45 million remaining on his contract, leaving his future in doubt at 39.

The slumping Canó was designated for assignment in a move announced Monday about an hour before teams were required to trim their active rosters from 28 players to 26. He sat out last season while serving his second suspension for performance-enhancing drugs and was relegated to a part-time role this year.

New York has seven days to trade or release Canó, or send him outright to the minors — an assignment he would have the right to refuse. It’s highly unlikely another club would claim Canó on waivers because it would be responsible for his full salary. But if he’s released by the Mets, a team could sign him for a prorated share of the $700,000 minimum this season and also pay the $710,000 minimum in 2023.

The Kansas City Royals have called up catcher MJ Melendez, who led the minors with 41 home runs last year.

The 23-year-old catcher had a combined 103 RBIs and a 1.011 OPS in Triple-A and Double-A last season. He has never played in the majors.

The Royals made the roster move after Cam Gallagher, who backs up All-Star catcher Salvado Perez, was put on the 10-day injured list because of a strained left hamstring. Gallagher will be out for an undetermined amount of time.

Kansas City lost its fourth in a row Monday, 1-0 at St. Louis in a makeup of a rainout last month. The Royals have dropped 21 of their last 28 to St. Louis dating to Aug. 7, 2017 — this I-70 interleague series now switches to the other side of Missouri for two games. 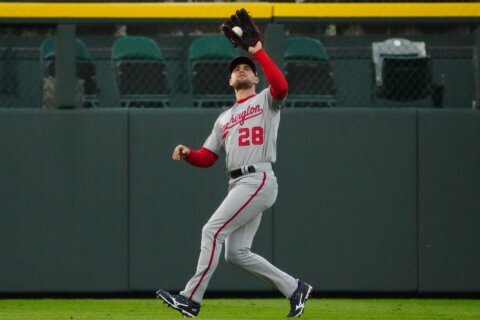