Raise a toast to the D’backs: Beer leads 11-2 win at Nats

Seth Beer's three hits and three RBIs propelled the dormant Arizona Diamondbacks to more than double their previous highest output of the season in an 11-2 victory over the Washington Nationals on Wednesday night after a pregame parachuting display caused a scare at the nearby U.S. Capitol.
Listen now to WTOP News WTOP.com | Alexa | Google Home | WTOP App | 103.5 FM
(1/4) 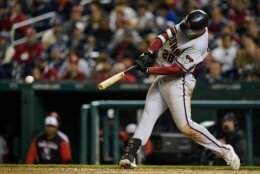 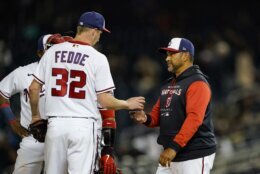 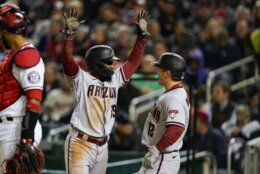 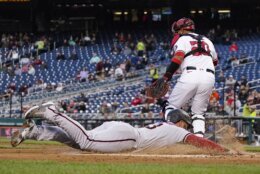 A little while later, in the visitor’s clubhouse, rookie Seth Beer considered the state of Arizona’s offense and offered this analysis: “That’s just baseball — that’s why we love this game and that’s why we hate it. But the more we can continue to get opportunities to be a thereat is when things will start to go our way. We’ve got to keep that mentality and things will start happening.”

They sure did — for a day, anyway.

Beer’s three hits and three RBIs, along with Daulton Varsho’s two-run homer to cap a lengthy at-bat, propelled the dormant Diamondbacks to more than double their previous highest output of 2022 in an 11-2 victory over the Washington Nationals after a pregame parachuting display caused a scare at the nearby U.S. Capitol.

Arizona entered with a 3-8 record, thanks largely to its woes at the plate, including just 22 runs — two per game. They hadn’t pushed across more than five runs in any contest and tallied a grand total of one across 18 innings while getting swept in a doubleheader Tuesday.

“We didn’t let up. We kept going, kept putting guys on, kept getting those big hits,” Beer said after raising his average to .438.

One at-bat in particular stood out: Varsho’s in the fourth against Erick Fedde (1-1).

Varsho saw 11 pitches in all, fouling off eight, before sending an 89 mph cutter over the wall.

“You can just tell by (his) body language,” Varsho said about Fedde. “He was getting a little frustrated that I was wasn’t kind of swinging and missing or just putting the ball in play.”

Beer said that was “uplifting” to the team.

“In the dugout, when you see a guy compete in an at-bat like that and not give in — that’s kind of what we’re going for.”

Fedde’s take: “I showed him every pitch I have.”

The Diamondbacks’ 10 hits were spread out, with at least one apiece for seven of the nine players in the starting lineup.

“We knew that with the grind upon us … that something like this was going to take place,” Arizona manager Torey Lovullo said, “and we were going to find our way into a big night.”

The output was far more than Diamondbacks starting pitcher Merrill Kelly (1-0) needed. The right-hander went six innings, giving up one run and a half-dozen hits. He hadn’t allowed a run in 9 1/3 innings over his other two starts this season and his ERA is 0.59.

“Everybody came out with great energy tonight,” Kelly said. “It was a lot of fun, just being in the dugout.”

Beer’s father, Mike — “Big Mike,” the son said with a smile — lives in Atlanta and was on a business trip about a 1 1/2-hour drive away from D.C., so he made the trip to be at the ballpark.

“Just to look up in the crowd … and I saw him, just with the biggest grin on his face — that’s what it’s all about,” Seth Beer said. “He followed this dream for me for a long, long time and to kind of live in the moment with him was awesome.”

The U.S. Capitol, a little more than a mile from the ballpark, briefly was evacuated shortly before the game because police said an aircraft posed “a probable threat” — but it turned out the plane was carrying members of the U.S. Army Golden Knights, who parachuted into Nationals Park as part of Military Appreciation Night.

Nationals: 1B Josh Bell left after the third inning because his left knee “tightened up,” he said. He’ll have an MRI exam on Thursday. … LHP Sean Doolittle went on the 10-day IL with a sprained left elbow. The 35-year-old Doolittle felt sore during an appearance Tuesday.