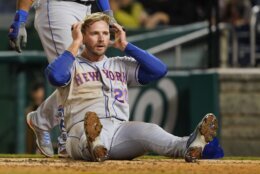 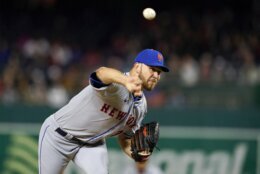 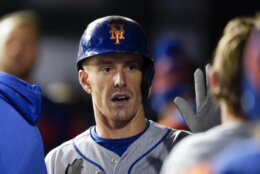 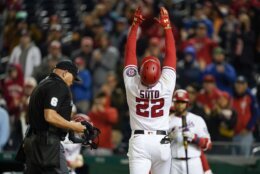 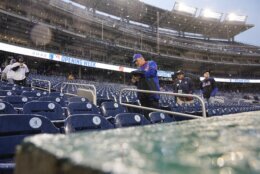 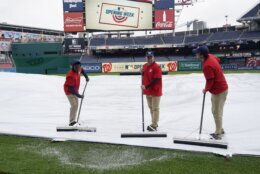 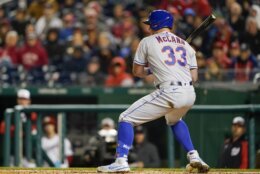 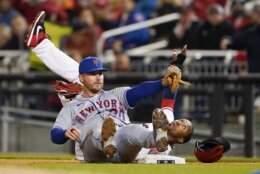 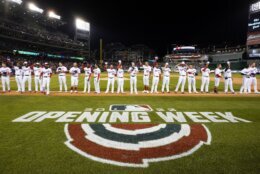 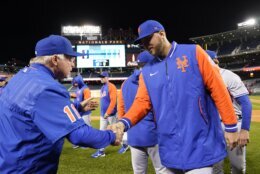 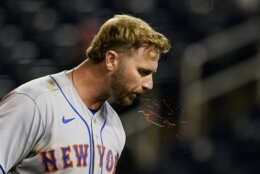 WASHINGTON (AP) — For each of the past three seasons, the New York Mets sent Jacob deGrom to the mound on opening day and watched him throw at least five scoreless innings.

This time, an injured deGrom was not available, so fill-in Tylor Megill took the ball from new Mets manager Buck Showalter and turned in a suitable impression of what the two-time Cy Young Award winner usually does in Game 1.

Megill, a 6-foot-7 right-hander only in the majors since last June, threw five shutout innings in a 5-1 victory over the Washington Nationals, making the Mets the first team in major league history to get scoreless outings from their starters on opening day in four consecutive seasons.

“He was awesome. He was electric,” said New York first baseman Pete Alonso, whose eventful evening included getting a bloody lip when he was hit by a pitch in the ninth and the ball ricocheted off his chin flap and into his mouth. “He had a lot of poise, a lot of moxie.”

Mark Canha and Starling Marte — two products of the Mets’ quarter-billion dollar offseason spending spree — drove in runs, as did Francisco Lindor, who hit only .230 with 63 RBIs in 2021, his first season in New York.

Megill (1-0) entered the day with the least amount of time in the majors of any Mets opening day starting pitcher in club history, but drew the assignment because deGrom is starting the season on the injured list with a shoulder blade problem.

“I was excited, definitely, but for the most part, I felt very relaxed,” said Megill, who said he wants to get ahold of his No. 38 game jersey from Thursday as a keepsake.

He allowed three hits, didn’t walk anyone and struck out eight batters.

The highlight of Megill’s night? That came with runners at the corners with one out in the third inning and Washington sluggers Juan Soto and Nelson Cruz coming up. Megill struck out Soto swinging on a 98 mph fastball, then got Cruz to ground out on a 2-0 changeup.

Here’s how Megill described his strategy there: “Feed the strike zone. In ways, let them get themselves out.”

Soto produced Washington’s run with his 99th career homer, a second-deck shot off Trevor May in the sixth.

“Nothing surprises me when it comes to his hitting,” Nationals manager Dave Martinez said.

Soto is one of the lone remnants from Washington’s title team of three years ago. General manager Mike Rizzo tore down the roster at the trade deadline last July in the midst of a second straight last-place NL East finish.

There were occasional “Let’s go Mets!” chants from a crowd announced at 35,052 with the temperature around 50 degrees.

Alonso got hit by a pitch from reliever Mason Thompson in the ninth and reached immediately for his mouth, but said afterward: “All good. Just a busted lip. That’s it. Got all my teeth. No concussion.”

Said Showalter: “He’s going to, somebody said, have some sexy lips for a couple days. … I’m not happy about it.”

Showalter said there was some emotion in the dugout after that ball struck Alonso; James McCann was hit twice earlier — once by Corbin with the bases loaded and once by Andres Machado.

“I’m not going to get into intent,” Showalter said.

Alonso also had two hits and got thrown out at home while trying to score from first base on Eduardo Escobar’s double in the fourth. Alonso immediately put his hands to his ears to signal that he wanted a reply challenge. Showalter requested one but lost, a ruling announced to the crowd by an umpire under a new policy this season.

Showalter is with his fifth major league team as a skipper, including the Yankees from 1992-95 and, most recently, the Orioles from 2010-18. … The Mets are a major league-best 40-21 on opening day — despite losing their first eight openers. … DH Nelson Cruz went 0 for 4 in his Nationals debut.

Nationals: Strasburg was put on the 10-day IL as he continues his return from thoracic outlet surgery. … RHP Will Harris, who had surgery to clean up scar tissue in his right pectoral muscle last week, went on the 60-day IL. … INF Ehire Adrianza (strained left calf) went on the 10-day IL.

Three-time NL Cy Young Award winner Max Scherzer will make his first Mets appearance Friday — and it’ll be his return to Nationals Park after pitching for Washington for 6 1/2 seasons. Washington starts Josiah Gray, acquired in the trade that sent Scherzer to the Dodgers last July. 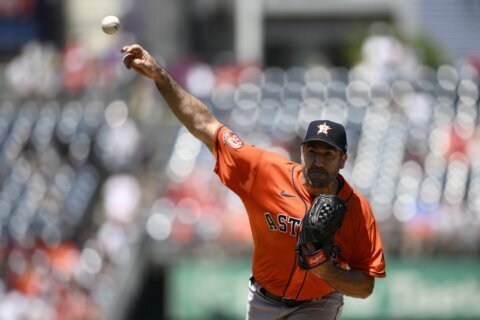 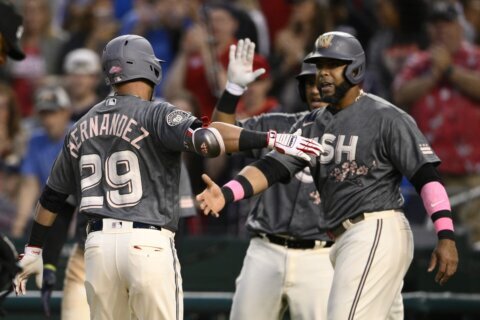 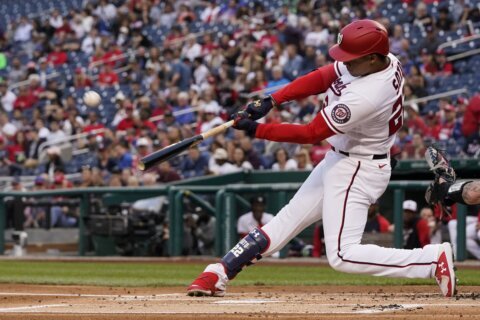 Astros aim to keep win streak going against the Nationals