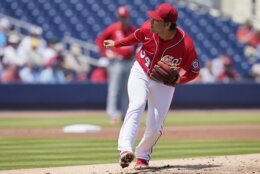 WEST PALM BEACH, Fla. (AP) — Washington Nationals fans have reasons to doubt 2022 will be their year. They got 29 more of them Wednesday.

Pitchers Anibal Sanchez and Cade Cavalli allowed 10 runs each while the Nationals were shellacked 29-8 by the St. Louis Cardinals in a spring training game — a laugher even by exhibition standards.

“Things just got a little bit out of hand,” Washington manager Dave Martinez said. “They had some hits where they had the magic wand today.”

The Cardinals scored 15 times in the eighth inning, a barrage that began against Cavalli.

St. Louis has never scored more than 12 runs in an inning during a regular-season game. The outburst was so brain-breaking that when Washington’s Gilbert Lara hit a three-run homer in the bottom of the eighth, the scoreboard operator briefly awarded the runs to the Cardinals — perhaps out of muscle memory.

Over 131 years in the National League, the Cardinals’ regular-season record is 28 runs in a game, against Philadelphia in 1929. Records dating to 1996 show their spring training high at 18 runs.

Hopes aren’t especially high in Washington a year after the franchise traded Max Scherzer, Trea Turner and Kyle Schwarber ahead of the trade deadline. No one sees this kind of loss coming, though.

Sanchez allowed 10 runs on 12 hits and one walk over four innings. In the second inning, the 38-year-old threw so many pitches that Martinez removed him, only to have him re-enter the game the following inning.

“I threw like 90 pitches, and I’m still healthy,” Sanchez said. “So that’s a good thing right now. I’m just working on being ahead in the count. I don’t want to be afraid of everything that happened today and try to be around the strike zone.”

“I went to battle and I lost today,” Cavalli said. “I’m going to keep my head up. I’m going to learn from it, work, and everything’s going to be good.”

Sanchez and Cavalli are under consideration for the final spot in Washington’s rotation.

In Sanchez’s only other Grapefruit League outing, he pitched 2 1/3 scoreless innings, walking two and striking out three without surrendering a hit.

Cavalli, who could also make the team as a reliever, had allowed three earned runs in six innings across two spring appearances while striking out nine.

“Once you see where the game’s going, it’s more about getting their up-downs, getting their pitch count up there, and building for their next start,” Martinez said.

Both pitchers are expected to make one more start before Washington breaks camp.

Stephen Strasburg threw his first bullpen session in what Martinez termed “a while” prior to Wednesday’s game.

Strasburg is returning from surgery to treat thoracic outlet syndrome.

“We kind of regressed a little bit because he felt like his mechanics were off,” Martinez said. “We wanted to back him off a little bit so that he felt right. But he was good today.”

Strasburg incorporated a full windup in his delivery on Wednesday. The 2019 World Series MVP had been pitching out of the stretch since 2017.

“He’s trying to get more out of his lower half,” Martinez said.

Strasburg’s next outing will also be in the bullpen. There is no timetable for the right-hander to appear in a major league game. 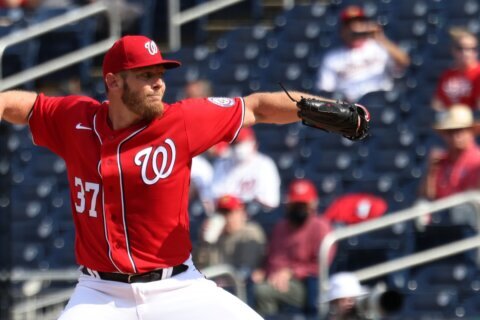