Coronavirus News: Fairfax Co. votes to increase substitute teacher pay | Is it time to get a COVID-19 booster? Which one? | Local cases of COVID-19 | How many in DC region are vaccinated?
Home » Washington Nationals » Cool Story: Shortstop has… 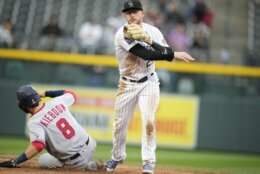 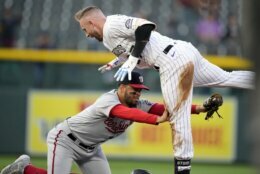 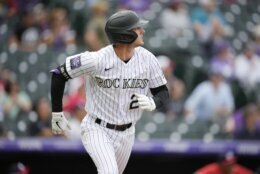 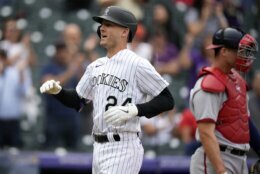 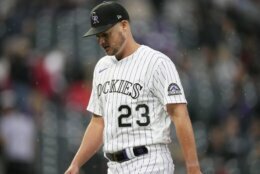 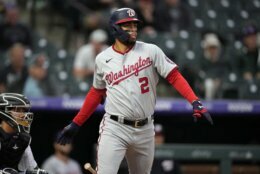 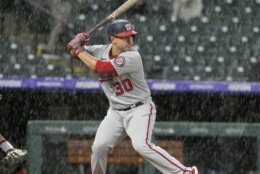 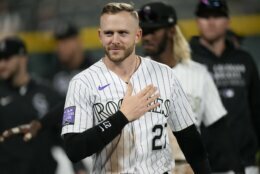 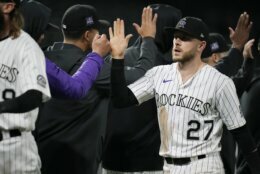 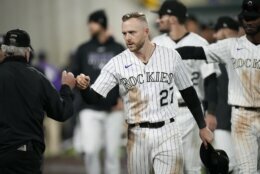 DENVER (AP) — Trevor Story ran out to his position to start the game like he typically does and noticed one thing — no one was following him.

The cheers from the fans soon followed.

Part of a day filled with send-offs for Story, just in case this indeed was his final game with Colorado at Coors Field.

Story certainly did his part, too, with a career high-tying four hits, a walk and three runs scored to help the Rockies beat the Washington Nationals 10-5 on Wednesday.

“I’m pretty satisfied with it,” Story said in an emotional postgame interview. “Wish I would’ve hit the ball a little harder and done some more damage. But I’m never going to apologize for the hits.”

Ryan McMahon added a three-run homer in Colorado’s home finale, which was interrupted for two hours by rain.

Washington and Colorado combined to use 14 pitchers over 5 hours, 57 minutes, including a rain delay that halted the game in the third. This game even featured the stadium lights briefly going out in the eighth.

Really, though, this was the Story Show and his performance epitomized him as a player, manager Bud Black said. The shortstop who’s eligible to be a free agent did a little bit of everything.

“Today was a game we’ve seen Trevor have many, many times, where he impacted the game on defense, with his legs and with the bat,” Black said. “It’s been great to watch the maturity and growth.”

Although he said he hasn’t decided anything, Story was treated as if this might turn out to be his final game at Coors Field wearing purple pinstripes.

Teammates let him run out on the field alone at the start just to absorb the applause. That was the idea of good friend Charlie Blackmon.

“Chuck got me pretty good,” Story said. “It means a lot they did that.”

Story also received an ovation before stepping into the batter’s box. Then the first-round pick in the 2011 amateur draft let his bat do the talking with four hits — all singles, including one in which he was thrown out trying to stretch.

Story walked in his final at-bat in the eighth and scored on McMahon’s groundout. Story slid into home and made a point to reach back and touch the plate again.

No extra meaning, though.

Not many fans stuck around for the end, when the Rockies made their way around the field and waved to the fans. Story gave away some of his gear as a way to say thank-you.

“A small token of my appreciation,” Story said.

Colorado finished 48-33 at Coors Field. The Rockies will be sitting out the postseason for a third straight season.

Juan Soto was 1 for 4 with an RBI and is hitting .318. He’s trying to catch current Dodger and former teammate Trea Turner for the NL batting title. Turner entered the day hitting .325.

Soto made a a nifty catch at the fence in right and appeared to bang his knee on the wall. He hobbled around for a moment before motioning he was OK.

Ashton Goudeau (2-1) earned the win for Colorado. Mason Thompson (1-3) took the loss for the Nationals.

Sam Hilliard gave the Rockies a 6-5 lead in the third with a two-run single. Colorado added three more in the fifth to pull away.

The game started under partly cloudy skies and a temperature of 70 degrees. The rain hit in the top of the third inning. The temp dropped to 54 degrees by the end.

“He can go into the offseason knowing he’s healthy,” Black said of Lambert.

Nationals lefty Patrick Corbin has a blister and won’t make another start this season.

“I don’t want to push it,” manager Martinez explained.

Nationals: Following an off day, host Boston for three games to close out the season. Lefty Josh Rogers (2-1, 2.73) goes Friday.

Rockies: Off Thursday before beginning a season-ending three-game trip in Arizona. Righty Jon Gray (8-12, 4.28) will pitch Friday in what could be his last start for Colorado.