Coronavirus News: Fairfax Co. votes to increase substitute teacher pay | Is it time to get a COVID-19 booster? Which one? | Local cases of COVID-19 | How many in DC region are vaccinated?
Home » Washington Nationals » Soto takes over NL… 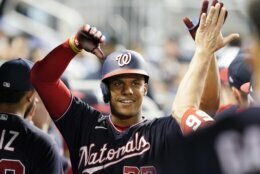 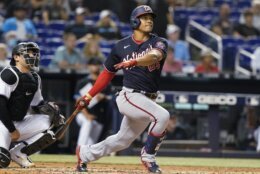 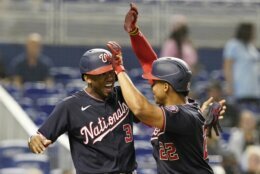 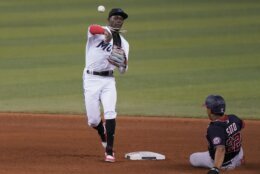 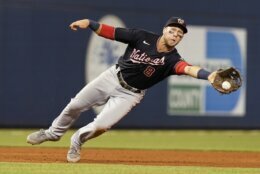 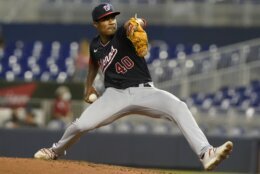 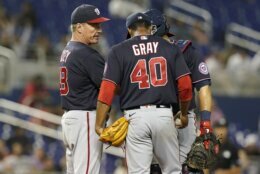 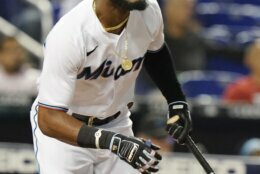 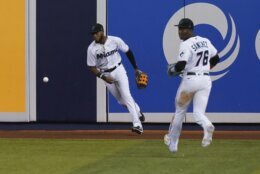 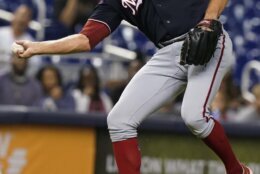 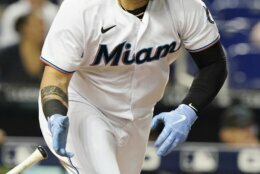 Soto singled, doubled and hit his 27th homer, raising his average to .321 and passing former teammate Trea Turner of the Los Angeles Dodgers, who is at .318. Soto walked twice and with 130 tied Bryce Harper’s team season record, set in 2018.

“I try to motivate myself every day,” Soto said. “I just try to come in and grind it as hard as I can and play to win games. Since last month, I’ve been seeing the ball really well. I’ve been taking my pitches. It feels good.”

Soto has reached safely 49 times, second-most since 1901 ahead of a player’s 23rd birthday behind Ted Williams’ 54.

“What he’s done and what he’s meant to this team as you know, he carries this team, day in and day out,” Nationals manager Dave Martinez said. “He knows the ball he wants to swing at, he’s ready to hit them and when he gets them, he smokes them.”

Josiah Gray (1-2), a 23-year-old rookie right-hander acquired from the Dodgers for Max Scherzer and Turner on July 30, got his first big league win. He allowed two runs and six hits in six inning with eight strikeouts and two walks.

“I’m really happy that I got that first one tonight but I try not to think about it too much and just go out there and pitch my ball game,” Gray said. “It’s definitely something I would think about here and there, but at the end of the day, I just want to pitch well and put the team in position to win.”

He nearly got his second big league hit when he lined the ball into right field in the sixth only for right fielder Jesús Sánchez to grab the ball on one bounce and throw him out at first.

Yadiel Hernández and Luis García also went deep for the Nationals, who won the season series 11-8. Washington remains last in the NL East, just behind Miami. At 63-89, the Nationals are nearing their poorest record since 2010′s 69-93.

Yadiel Hernández homered leading off the second, Soto hit a two-run homer in the third — a drive into the right field upper deck — and García made it 4-0 with a leadoff homer in the fourth.

Nick Fortes’ pinch-hit, two-run homer and Sandy León’s one-out drive off Ryne Harper in the ninth closed the gap before Tanner Rainey came in and retired Miguel Rojas and Jazz Chisholm Jr. on groundouts for his second save.

“Nick gets us two and Sandy gets us one and suddenly you need a runner to put the game on the line,” Marlins manager Don Mattingly said. “It’s nice to see the guys continue to go.”

Chisholm hit a sixth-inning ball that bounced off the roof in foul territory and was caught by first baseman Josh Bell, but ground rules say a ball is dead once it hits the roof outside fair territory.

Alcantara has become the ace of the rotation and leads the team in wins (9) and is among the NL leaders in starts and innings pitched. Aguilar has a team-leading 22 homers and 93 RBIs.

The Marlins selected the contract of RHP Luis Madero from Triple-A Jacksonville and designated RHP Taylor Williams for assignment.

Nationals: LHP Patrick Corbin (8-11, 6.11) will start the opener of a four-game series at Cincinnati Thursday.

Marlins: RHP Edward Cabrera (0-2, 5.31) is scheduled to start the opener of a three-game series at Tampa Bay on Friday.