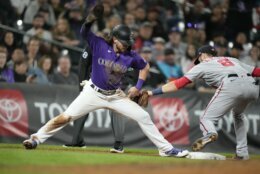 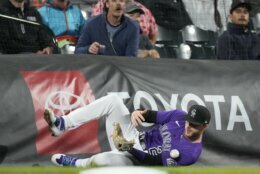 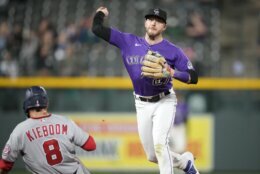 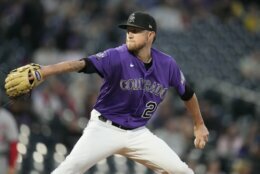 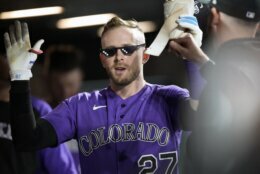 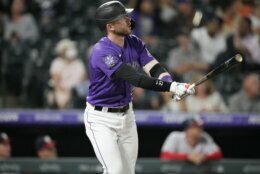 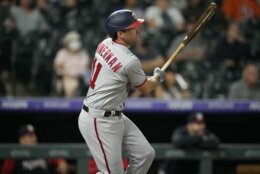 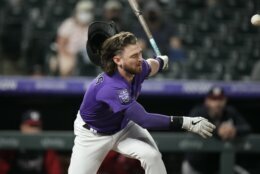 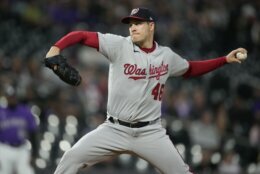 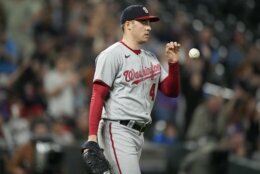 DENVER (AP) — Trevor Story is sure of one thing if his homer Tuesday night winds up as his last at Coors Field for the Colorado Rockies.

“That was a good one,” Story cracked.

Story lined a long, long solo homer with his days in Denver possibly numbered, Kyle Freeland pitched into the seventh inning before running into trouble and the Rockies snapped a five-game Coors Field skid with a 3-1 win over the Washington Nationals.

As he circled the bases, Story received a round of applause from the crowd. The shortstop who was a first-round pick by Colorado in 2011 is set to become a free agent.

What an iconic image to leave them with, too.

Story connected on a slider from Patrick Corbin that went 475 feet, according to Statcast. It was the second-longest homer of the season by the Rockies, behind Ryan McMahon’s 478-foot blast on May 15 against Cincinnati.

“It’s special,” Story said. “Always good to hit a home run in front of our home fans. They’ve always treated me so well.”

Story hasn’t completely ruled out a return to the Mile High City.

“The most fair way to say it is no teams are out of it,” Story said. “That’s as simple as I can put it.”

Freeland (7-8) was cruising along until the seventh, when he loaded the bases and walked in a run with two outs to make it 2-1. He turned the ball over to reliever Tyler Kinley, who got Alcides Escobar to fly out and end the threat.

Carlos Estévez pitched the ninth for his 10th save in 16 chances.

The left-handed Freeland kept slugger Juan Soto and the Nationals from the timely hit over 6 2/3 innings, allowing one run while striking out three and walking four. Freeland has given up three earned runs or less in 15 of his last 18 starts.

“Feels like I’m in the middle of mid-season form,” said Freeland, who didn’t make his first start until May 25 due to a strained left shoulder he suffered in spring training. “It sucks because it’s the end of the season and I feel this way.”

Freeland could possibly make another start Sunday in Arizona or Monday in Atlanta, should the Rockies and Braves need to make up their postponed game from Sept. 16. Black would certainly take more of this version of Freeland.

“He pitched outstanding,” Black said. “His stuff was crisp.”

Soto went 0 for 4 and dropped to .318. He trails in the NL batting race behind the Los Angeles Dodgers’ Trea Turner, who raised his average to .325 with a three-hit night.

Corbin (9-16) tied a season-high with nine strikeouts as he threw six innings. He allowed two runs — an RBI double by McMahon in the fourth and Story’s 24th homer of the season in the fifth.

“Kind of hung a slider there to Story,” Corbin said. “That happens sometimes in this ballpark.”

Brendan Rodgers added an insurance run with an RBI double in the seventh.

Nationals first baseman Ryan Zimmerman celebrated his 37th birthday with a double and an infield hit in which he was called out before a successful challenge.

“It’s hard to play at this level whether you’re 37, 21, 27,” Zimmerman said. “It doesn’t matter what age I am, you owe it to the game, you owe it to your organization — you work hard and you try to produce.”

A first-round pick by Washington in 2005, Zimmerman has remained quiet about his future.

Rockies: Rodgers was back in the lineup a day after being hit in the helmet by Josiah Gray’s 92 mph fastball. Rodgers had a foul ball hit the dirt Tuesday, pop up and knock his helmet off in the third inning against Corbin. Rodgers then flew out to right.

The Rockies will throw righty Peter Lambert (0-0, 4.91 ERA) in their last home game of the season Wednesday. The Nationals will go with righty Paolo Espino (5-5, 4.01), who’s making his first start at Coors Field.