Surging Phillies win 5th in a row, rally past Nationals 12-6 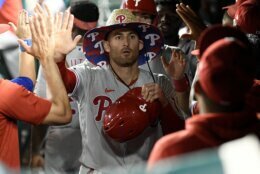 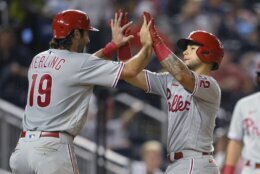 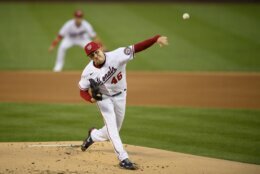 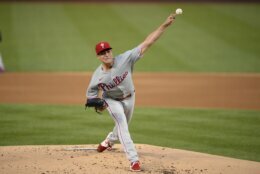 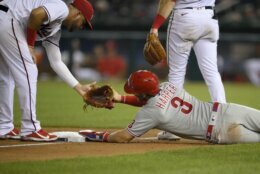 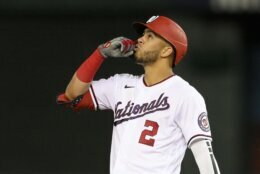 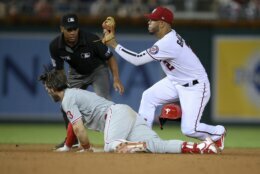 Matt Vierling had four hits for the Phillies, who have scored at least seven runs in six consecutive games for the first time since June 1933, moved within 2½ games of idle Cincinnati for the race for the NL’s second wild card. Philadelphia improved to 8-1 at Nationals Park this season.

Carter Kieboom homered for Washington, which has lost four in a row and six of seven. The Nationals completed a 7-20 August, their worst full month since going 5-16 in April 2009.

The Phillies took control against tiring starter Patrick Corbin (7-14) and the Nationals’ erratic bullpen in the sixth. Marchán tied it with a two-run shot, and Nick Maton’s walk ended Corbin’s night. Reliever Andres Machado gave up a single and hit a batter to bring up Harper, who drove in two with a sharp hit to right-center, but was thrown out trying to stretch it into a double.

McCutchen followed with an RBI double, and then scored on Odúbel Herrera’s single to provide insurance.

Harper, who signed a 13-year, $330 million contract with Philadelphia in 2019 after playing seven seasons in Washington, went 3 for 5, even as he received his usual boos in his old ballpark. He is hitting .419 (26 for 62) with seven homers and 14 RBIs against the Nationals this season.

Corbin, who allowed six runs in five-plus innings, is tied for the major league lead in losses. He has allowed an NL-high 33 home runs, including eight in 24 innings against the Phillies.

“Giving up those homers there has been my issue all season,” said Corbin, who gave up McCutchen’s shot on a looping 65-mph curveball in the fourth in addition to Marchán’s blast. “Definitely frustrated with that, for sure.”

Phillies: C J.T. Realmuto, who left Sunday’s game with left ankle soreness, was out of the lineup for the second game in a row. “I wasn’t comfortable sending him out there at 75-80 percent because I felt like it would just linger,” Girardi said. “I’m not sure if we’re going to play tomorrow with the weather. It would possibly give him two days, which would be really helpful and feel like we took care of it.” … Philadelphia placed Travis Jankowski on the paternity list and recalled Vierling from Triple-A Lehigh Valley.

Nationals: SS Alcides Escobar was out of the lineup a day after fouling a ball of the inside of his left knee and leaving in the first inning. … Washington placed RHP Kyle Finnegan on the paternity list and recalled RHP Wander Suero from Triple-A Rochester.

Washington optioned OF Victor Robles to Rochester, the 24-year-old’s first demotion to the minors since 2018. Robles, who started every game of the 2019 World Series and was the Nationals’ Opening Day starter in center this season, is hitting .203 with two homers and 19 RBIs and had started twice in the last nine games while ceding playing time to recently acquired OF Lane Thomas.

“Hopefully it won’t take him long to get back up here,” manager Dave Martinez said. “This one hurt me a lot because I love the guy. We’re going to be good when he comes back and is playing well.”

OF Andrew Stevenson was recalled from Rochester to fill Robles’ roster spot.