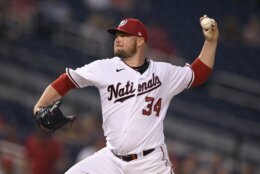 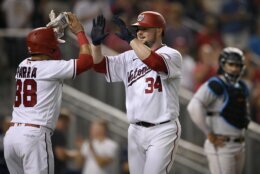 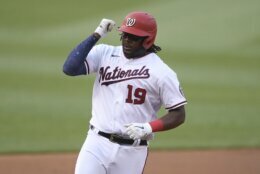 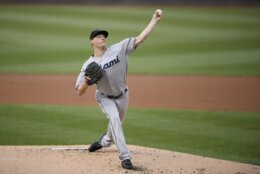 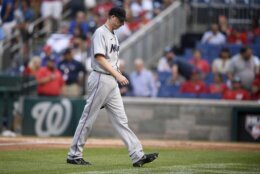 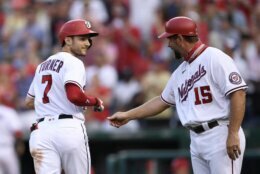 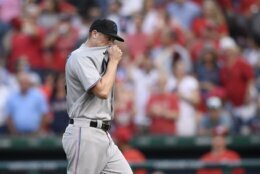 Lester (3-4) turned in his longest outing of the season, allowing six hits while striking out seven without a walk.

“He fell behind, and I was trying to hit a heater,” Lester said. “I was guessing. I don’t know how other pitchers hit, but I’m probably the idiot that guesses along like I would pitch guys. Just figured he was going to throw me a heater and tried to be on time. Got it, and fortunately didn’t miss it.”

Soto continued his torrid post-All Star game pace, going 3-for-4 with five RBIs and three runs scored. He’s 10-for-17 (.588) with five homers, 11 RBIs and eight runs scored in four games since the break.

“It just makes everybody better,” manager Dave Martinez said of Soto’s surge. “It picks everybody up. And it stretches out our lineup tremendously. He’s swinging the bat well, and he’s hitting the ball all over the field very hard.”

Trea Turner drove in four runs with a homer and a triple as Washington began a stretch of six games against the last-place Marlins and the Baltimore Orioles.

Miguel Rojas had a home run among his three hits for the Marlins, who were playing without several regulars. Miami lost its third straight game and a team meeting followed the Marlins worst loss of the season.

“It was one of those games that just kind of went bad from the beginning and really didn’t get much better from there,” said Mattingly, declining to discuss the post-game session.

Ross Detwiler (1-1), starting a bullpen game for Miami, was lifted with no outs in the second after allowing eight runs on seven hits, four of them home runs.

Washington added 10 more runs before the game was over.

“We kind of survived the game,” Mattingly said. “This isn’t really an easy one to wash off honestly, but we’re going to be ready to go tomorrow.”

Meanwhile, after going five innings or less in each of his past four starts, Lester threw 81 pitches, 59 for strikes, over seven.

“I’m just glad I was able to pitch some innings,” he said. “It’s been kind of a struggle lately with innings. So the simple fact of being able to get deeper in the game … my pitch count was manageable at the time.”

The Nationals recalled OF Andrew Stevenson from Triple-A Rochester and optioned RHP Andres Machado to Rochester.

Marlins: Placed infielder Jazz Chisholm Jr. (left shoulder contusion) and infielder/outfielder Garrett Cooper (left elbow strain) on the 10-day injured list. The Marlins recalled outfielder Lewis Brinson and selected the contract of RHP Andrew Bellatti from Triple-A Jacksonville. OF Starling Marte was not in the lineup. Mattingly said Marte tweaked a shoulder sliding on Sunday and could be in the lineup Tuesday.

Marlins: All-Star rookie LHP Trevor Rogers (7-6, 2.31) makes his second start of the season against the Nationals. On May 2, he took the loss, giving up three runs on four hits over five innings. 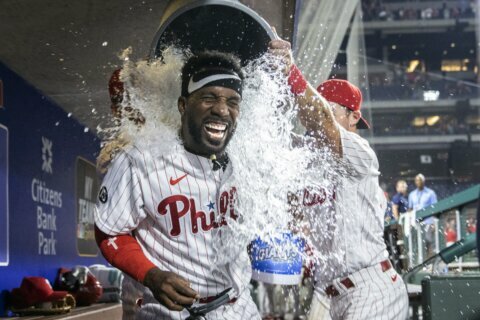