SAN FRANCISCO (AP) — All-Star Brandon Crawford had three hits, including his 18th home run, and the San Francisco Giants ensured themselves the best record in baseball at the break by thumping the Washington Nationals 10-4 on Saturday.

San Francisco is 56-32, assured of the major leagues’ top record at the All-Star break in a season when it was expected to lag behind the Padres and Dodgers.

“So far in this series we’ve fought for every pitch,” San Francisco manager Gabe Kapler said. “That’s a huge factor, and we’re not letting our foot off the gas at any point. That’s also important.”

Named to his third All-Star team last week, Crawford had a sacrifice fly in the first inning, singled in a run as part of San Francisco’s five-run third, doubled in the fourth and homered off Kyle McGowin in the sixth.

The 18 home runs by Crawford ties Jose Valentin’s mark for most before the All-Star break by a shortstop 34 years or older. Crawford’s career high for home runs in a season is 21.

“We all feel good as a team,” Crawford said. “We feel good about being in first place. What we’ve done a really good job of is going game by game and not worrying about other teams. Just focusing on what we need to do as a team to win games.”

DeSclafani (10-3) walked one and only allowed two runners past first base while setting a career high for wins. DeSclafani got Juan Soto to strike out looking twice and got help from right fielder Mike Yastrzemski, who made a sliding catch in foul territory to end the sixth.

The Giants batted around twice in the first three innings to chase starter Jon Lester (2-4).

“It was tough but his pitch count got way up there.” Nationals manager Dave Martinez said. “We had to do something. He’s definitely frustrated. I believe in him, we all believe in him. We need him.”

Lester had won five of his six career starts against the Giants before Saturday. The five-time All-Star retired eight batters and allowed nine hits and eight runs — three earned. It’s the second time in his last four starts that Lester failed to make it out of the third.

“Kind of the same song and dance as the last couple here,” Lester said. “Seems like I can’t minimize the bad. I’m OK with the hits and runs but when it’s consistently two and three innings, it’s putting the team in a bad position.”

The Giants scored three unearned runs in the first after left fielder Gerardo Parra dropped Ruf’s deep fly ball. San Francisco batted around and had three infield singles, including one by Joey Bart, who hit a line drive that Lester fielded between his legs but couldn’t hold on to.

“We were especially fortunate in the first couple of innings,” Kapler said. “I’d also say we smoked some balls that on other days may have been home runs. Early in the game the air felt a little dead.”

Bart went 2 for 5 after being called up from Triple-A Sacramento by the Giants. RHP Logan Webb was optioned to the River Cats. Webb started for San Francisco on Friday after a lengthy stay on the injured list.

Washington called up Jakson Reetz from Triple-A Rochester after Yan Gomes was put on the IL. Reetz doubled in the ninth for his first major league hit. Kyle Lobstein was designated for assignment. Lobstein had a 20.25 ERA in three games as a reliever with the Nationals.

Nationals: Gomes had an MRI on Saturday after coming out of Friday night’s game because of the injury.

Right-handers Kevin Gausman (8-3, 1.74 ERA) of the Giants and Erick Fedde (4-5, 4.53) of the Nationals face off the second time this season in the series finale Sunday. Gausman, San Francisco’s All-Star ace, suffered his first loss of the season in the first matchup on June 12. 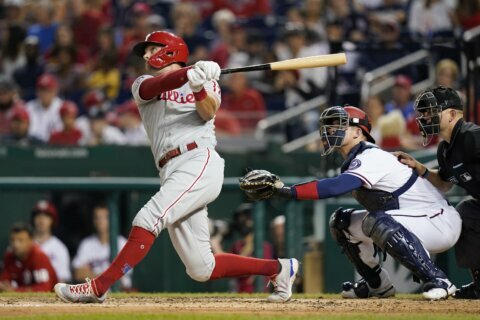 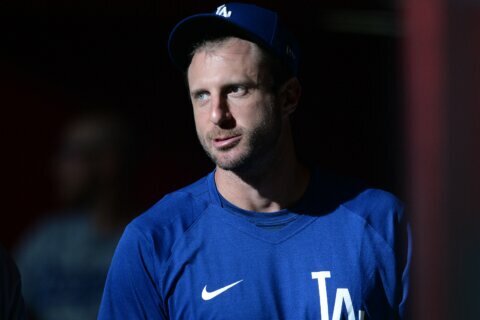