WASHINGTON (AP) — LaMonte Wade Jr. led off the eighth inning with an RBI single that broke a scoreless tie and the San Francisco Giants held on to beat the Washington Nationals 2-1 Saturday to earn a split in the day-night doubleheader.

In the opener, Erick Fedde returned after nearly a month on the COVID-19 injured list and pitched five sharp innings in the Nationals’ 2-0 win.

The teams combined for five runs in the doubleheader that was scheduled after Thursday’s rainout.

Held to just one hit in the first seven innings of the second game, the Giants quickly took advantage of the extra-inning rule that starts with a runner on second base.

Wade put San Francisco ahead and he later scored on a single by Wilmer Flores. The Nationals got one run back in the eighth on Starlin Castro’s RBI double but their comeback attempt took a big setback when Victor Robles was caught in a baserunning error after Josh Bell’s flyout to center that resulted in a double play.

“Honestly, I thought it was poor,” said Nationals manager Dave Martinez about Robles’ attempt to take second with one out and Castro on third.

“Not a very smart decision.”

“We’ve made our own share of boneheaded mistakes on the bases,” said Kapler.

Jack McGee (2-2) struck out three in one inning of relief and Caleb Baragar earned his first save. Kyle Finnegan (2-2) took the loss.

Fedde (4-4) last pitched on May 16 and was placed on the COVID-19 list three days later after testing positive. He rejoined the rotation by limiting the Giants to four hits while striking out seven and walking none in the first game.

“When they called me and told me, I was shocked,” Fedde said about his diagnosis.

“Obviously I’m not a scientist, but I was vaccinated and I felt great. I’m more than thankful I didn’t pass it around the team,” he said.

Schwarber hit his sixth career leadoff homer in the first game, connecting for a drive into the second deck in left field. A day after being shut out by San Francisco, Schwarber broke the scoreless string with his 10th home run this season, tied with Turner for the team lead.

The Nationals handed Kevin Gausman (7-1) his first loss this season. Gausman allowed two runs on three hits while striking out four in four innings, and exited with a 1.43 ERA.

Brad Hand pitched a perfect seventh for his 11th save.

The Nationals won with four hits. The Giants got five hits and were shut out for the third time this season and first since April 12.

In the second game, Yan Gomes caught Jefry Rodriguez’s first start with Washington since he was traded away to Cleveland after the 2018 season. Who was Rodriguez traded for? Well, that would be Gomes.

Rodriguez pitched four scoreless innings, allowing one hit and striking out two with three walks in his first major league appearance since 2019 with Cleveland. Rodriguez re-signed with the Nationals as a free agent after the 2020 season.

Giants: C Curt Casali was activated in between games and played for the first time since May 30 and went 0 for 3. … San Francisco optioned C Chadwick Tromp to Triple-A Sacramento.

Nationals: Martinez said he talked with Scherzer and that the Nationals ace feels a tick better than he did on Friday after feeling a tweak in his groin area. Scherzer was able to do some exercise and also received treatment on Saturday. … Right-handed reliever Daniel Hudson was placed on the 10-day IL with right elbow inflammation after having an MRI on Friday. The move is retroactive to June 10. 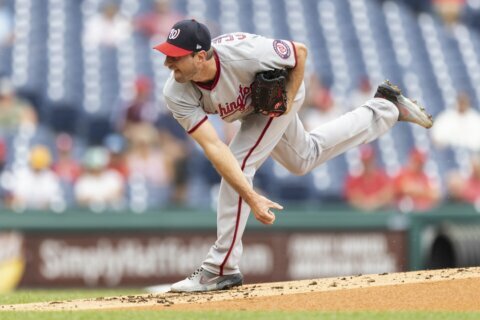 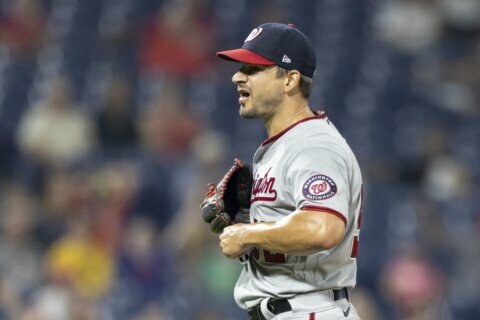