Max Scherzer is a 21st century Paul Bunyan. Twenty years from now we’ll be discussing the Nats pitcher and somehow his exploits will sound made up.

The pitcher hit home runs and stole bases as well? Yeah, right. During his near-perfect no-hitter Max had his jersey thrown in the dryer between innings to alleviate the lake of perspiration built up when he was on the mound? I’m sure. He pitched one game with a broken nose and three different colored eyes (black eye to go with the brown and blue)? Keep on talking.

Max’s arguably best season (2018) he led the league in wins AND strikeouts didn’t result in a Cy Young Award? Puh-leeze. He actually outperformed a seven-year, $210 million dollar contract? Stop, you’ve got us in stitches. Add another story to the book: Max once pitched a complete game five-hitter before leaving to join his wife as she gave birth to their child.

Sunday afternoon, 8,482 fans at Nationals Park were treated to vintage Max in a game that lasted just two hours and 38 minutes (you know, it appeared as though he was in a hurry to be elsewhere).

The 36-year old has had a few hiccups this year (from four homers allowed in his first start to seven runs coughed up in five innings last Tuesday), but on the Sunday before Mother’s Day, Max was on point: his nine strikeout, complete game performance recalled his multiple Cy Young Award seasons along with other great performances over the last six-plus years. And Max was able to join his wife for the birth of their child. Honestly–it really happened.

From a team standpoint, the 3-1 win over Miami helped Washington wrap up its first sweep of the season (first three game sweep since September 2019) and climb to .500 for the first time since they were 1-1. They’re now tied for the NL East lead after an April where a rough schedule and a busy Injured List had them in the basement for the bulk of the month.

Digesting the division: The New York Mets (11-11) beat Philadelphia (13-15) Sunday night 8-7 to move into a tie for first with the 12-12 Nationals. The Phillies fall to third place (they have the worst run differential in the division at -17). Atlanta has lost four in a row to slip into fourth place at 12-16 while Miami at 11-16 is in last place despite being the only team in the division with a positive run differential (+4).

Birds flying in place: One week after needing a win at home to avoid getting swept by red-hot Oakland, the O’s lose by the bay to the A’s who needed a victory to avoid getting swept at home. They may be 13-15 and in last place of the AL East, but this Orioles edition feels a lot different from recent cellar-dwellers on Eutah Street. Pitching (their 4.10 ERA ranks 16th) has been much better than expected while the continued comeback of Trey Mancini (21 RBI in 28 games played) after recovering from cancer and being away from the game an entire season is nothing short of incredible.

Say, isn’t that?: Adam Eaton’s bat may have cooled down as he went without an RBI this past week, but the ex-Nationals outfielder still has 18 on the season for the Chicago White Sox despite hitting .217. Michael A. Taylor is hitting .262 with 7 RBI for Kansas City and Wilmer Difo is batting .250 in limited action (32 at-bats) for Pittsburgh. Sean Doolittle after one month is 2-0 with a 3.97 ERA over 13 appearances, with one save in three opportunities.

Last week’s heroes: Trea Turner hit with 2 homers while scoring a team-high 6 runs. Josh Harrison was moved up to the number two spot in the lineup and hit .471. Ryan Zimmerman batted .385 with a team high 7 RBI, and his three-run homer Sunday accounted for all of the Nats’ runs. Jon Lester tossed 5 scoreless innings in his 2021 debut Friday, while Sam Clay and Brad Hand each posted zeroes in their efforts out of the bullpen (1.1 scoreless frames for Clay, 3 scoreless for Hand). Patrick Corbin allowed 2 runs over 7 innings to notch his first win since last August (eleven decisions).

Last week’s humbled: Starlin Castro hit .238 while Andrew Stevenson batted 1-6 in his limited opportunities. Victor Robles cost the team again with bewildering base running Sunday when he jumped too soon in a double steal turned disastrous.

Game to watch: Yes, Max pitches Saturday against Corey Kluber in the Bronx. But I’m curious as to how things work out this week against Atlanta. The Braves are drifting and the Nats are hot. Jon Lester is due to pitch Thursday afternoon and while nobody expects him to put up five zeroes like he did this past Friday, a series finale against a divisional foe just has a little more oomph to it.

Game to miss: Sunday the Nats conclude their series with the New York Yankees. On Mother’s Day I hope everyone has a chance to have a moment with their moms, or enjoy fond memories of mothers that have passed. Just don’t play the Mr. T video “Treat Your Mother Right” where he sings and spells out “mother”. I pity the fool who does because their curiosity won’t let them avoid checking out this gem on YouTube. 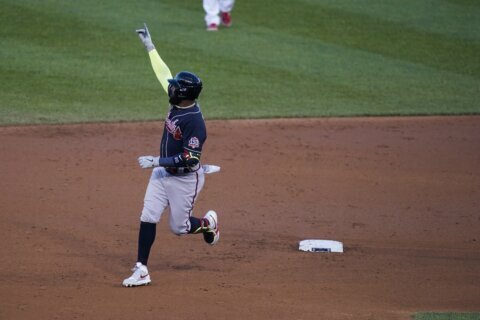