The Washington Nationals currently sit in the basement of the NL East as the 2021 campaign, and it's the team's lack of offense that's been a major reason why.
Listen now to WTOP News WTOP.com | Alexa | Google Home | WTOP App | 103.5 FM

The Washington Nationals currently sit in the basement of the NL East as the 2021 campaign, and it’s the team’s lack of offense that’s been a major reason why.

Washington currently has the sixth-best team batting average in all of baseball, but that hasn’t translated into scoring runs. Through 38 games, the Nationals have only plated 148 runs; only the Mets and Royals have scored fewer.

And, in the launch-angle, home run-happy era baseball currently is in, the Nats, as a team, have launched just 40 balls over the fence.

Speaking with the Sports Junkies on Wednesday, Nationals general manager Mike Rizzo admitted the team must be more efficient with the bats in order to start piling up the wins.

“Offensively, we’re certainly not playing well enough to be where we want to be right now,” Rizzo said. “We have to be way more offensive efficient.”

Part of the reason Washington has struggled to plate runs has been due to missed time from three of its biggest bats. Star outfielder Juan Soto spent nearly two weeks on the Injured List earlier this season, while newcomers Josh Bell and Kyle Schwarber each missed significant time to begin the season in COVID-19 protocols.

As Rizzo pointed out, it takes a long time for hitters to get back into the groove of things when they miss major time in the early months of the year.

“I just think when you miss a lot of time at the beginning of the season, you’re playing catchup for a long time,” Rizzo said. “You’re kind of in spring training mode and these pitchers are in midseason form. It’s hard to get your timing when the bell rings and the real game start.”

The trio of hitters have all struggled at times during the season, but Rizzo is encouraged by what he’s seen from Bell, Schwarber and Soto over the past few games.

“You see Bell coming around a little bit and Schwarber swinging it a lot better,” Rizzo said. “Juan had a couple of hits to the opposite field yesterday; I think he’s going to snap out of it fairly soon.”

Schwarber, Bell — and especially Soto — have all proven to be standout hitters before. So while each one of them isn’t hitting to their capabilities right now, Rizzo believes that will “even out” fairly soon.

“Offensively, we’re certainly capable. We’ve got guys that have done it in the past,” Rizzo said. “You talk about guys like Bell, Schwarber, Soto, they’re in the primes of their careers. You figure they’re going to get the back of their baseball cards and play, offensively be the guys we think they’re going to be. That’s something we think will even out.”

The Nationals GM also made it a point that his club is playing well in other facets of the game and believes once the bats come around, the W’s will start piling up. 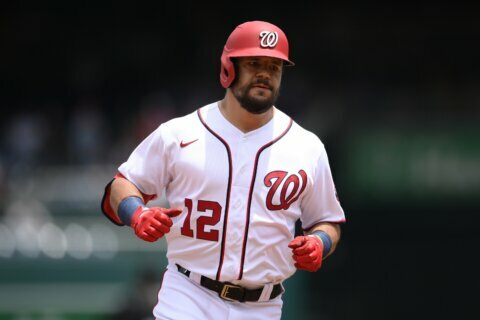