Kyle Schwarber led off the bottom of the 10th inning with a two-run homer and the Washington Nationals, boosted by a fine debut by Jon Lester, rallied past the Miami Marlins 2-1 on Friday night.
Listen now to WTOP News WTOP.com | Alexa | Google Home | WTOP App | 103.5 FM
(1/7) 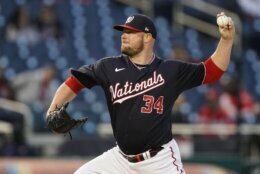 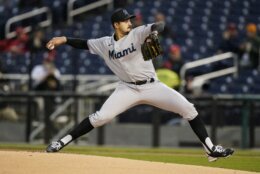 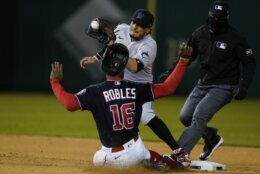 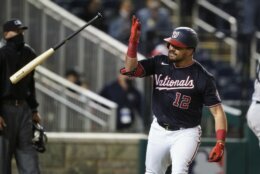 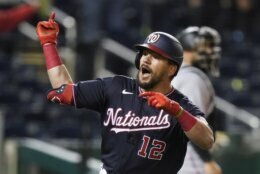 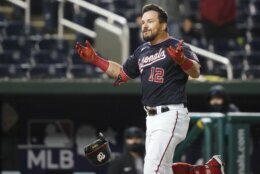 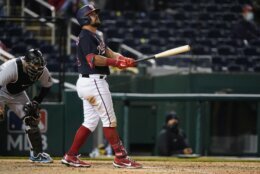 WASHINGTON (AP) — Kyle Schwarber led off the bottom of the 10th inning with a two-run homer and the Washington Nationals, boosted by a fine debut by Jon Lester, rallied past the Miami Marlins 2-1 on Friday night.

With Josh Bell starting the extra inning as the automatic runner on second base, Schwarber hit an 0-1 fastball to right-center off Yimi Garcia (2-2). It was Schwarber’s second walk-off homer of the season.

“Obviously it’s nice to come up in that spot and deliver,” Schwarber said. “That wasn’t my intention. Obviously I wanted to drive him in, but the secondary option was to get him to third base. … Once the ball went into the stands, that’s a good feeling to know that we got a walk-off win right there.”

Garrett Cooper’s single off Hand scored Jose Devers to the Marlins a 1-0 lead in the top of the 10th.

Lester, Schwarber’s former teammate with the Chicago Cubs, pitched five scoreless innings in his first game for Washington. Reinstated from the injured list before the game, he allowed five hits and two walks while striking out one on 70 pitches.

“The hardest part is sitting back and seeing everybody else play and not being able to be a part of it,” Lester said. “It makes you miss it. Like you can kind of taste it, but you can’t. You’re there, but you’re not. A lot of hoops to jump through to get back to this point. I’m just glad that we got through it unscathed and got this one under the belt.”

The 37-year-old Lester was one of nine Nationals players quarantined before the season because of COVID-19 protocols. Four players tested positive while five others were put under quarantine after contact tracing determined they might have been exposed.

Lester signed a one-year contract with Washington in late January after six seasons with the Cubs in which he went 77-44 with a 3.64 ERA in 171 starts.

“I think what was going well was being able to give ourselves options by getting ahead in the count,” Lopez said. “When you work 0-1, 1-2, 0-2 you give yourself more options and more opportunities to go with your plan. ”

Lester was asked about Schwarber having now homered in 24 of his starts.

“I always feel like he hits so well when I pitch,” Lester said. “It’s probably because he’s maybe messed something up out there in left field — we won’t go there. That’s a running joke with us. I know the biggest thing with him is he’s giving you 110% regardless of who’s out there. He’ll literally run through the wall for you if he can. He’s such a competitor.”

Marlins: RHP Elieser Hernandez (right biceps inflammation) threw a bullpen session Wednesday and is expected to throw another one this weekend. … INF Brian Anderson (left oblique strain) was expected to take batting practice on the field.

Nationals: RHP Stephen Strasburg (right shoulder) is throwing at 200 feet on level ground and is expected to throw his first bullpen session this weekend. … OF Juan Soto (left shoulder) began light throwing on Thursday and threw again on Friday. 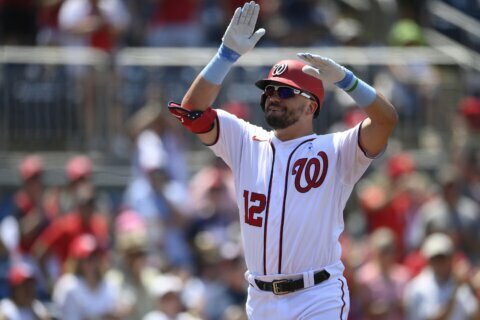