Before Victor Robles can bat leadoff, he must show Nationals signs of progress

While Victor Robles spent most of his time in the majors hitting in the bottom third of the lineup, the Nationals hope to move Robles up to the No. 1 spot if he makes strides this spring.
Listen now to WTOP News WTOP.com | Alexa | Google Home | WTOP App | 103.5 FM

Before Robles can lead off, he must show Nats signs of progress originally appeared on NBC Sports Washington

In a perfect world, Victor Robles is hitting leadoff for the Nationals.

Washington’s former top prospect has always oozed potential, carrying more tools than an overworked plumber and receiving every opportunity to put them to use. So far, however, Robles hasn’t lived up to the potential he displayed in the minor leagues.

Still only 23 years old, Robles has hit .246 with a .713 OPS in 207 games since taking over as the Nationals’ everyday center fielder in 2019. He’s piled up the strikeouts, struggled to take his walks and only shown flashes of power. While he’s spent most of his time in the majors hitting in the bottom third of the lineup, the Nationals hope to move Robles up to the No. 1 spot if he makes strides this spring.

“If we could have Victor Robles lead off, it’s huge because it now allows us to put Trea [Turner] — who’s now a really, really polished hitter — allows us to put him in maybe the two or three hole and it kinda lengthens out our lineup,” Nationals hitting coach Kevin Long said in a Zoom call Tuesday. “We need him to progress and get better. If he can lead off and he starts to learn the strike zone and do some things that a good leadoff hitter is capable of, we’re in good shape.”

The Nationals received most of their offensive output in 2020 from Turner and Juan Soto, so a spike in production from anyone else in the lineup would be a welcomed sight. Yet Robles’s speed on the basepaths makes him a natural fit for the leadoff spot. If manager Davey Martinez can pencil Robles in at the top of the order, it takes pressure off the hitters in the bottom half of the lineup.

But first, Robles has some work to do.

“Victor has made some big changes,” Long said. “We set him out with a plan when the season ended to kind of spread out, to get into his legs again, to start using his lower half the way he’s capable of using it. We also have a two-strike approach with him now. If you look at his numbers with two strikes, they weren’t very good and the reason why is he still had a lot of movement and he still had a lot of stuff going on in his swing…it’s gonna take him some time to get used it.”

Both Martinez and Long mentioned this week that Robles’s splits against left-handed pitchers could allow the Nationals to hit him leadoff on a platoon basis. The center fielder hit .326 against southpaws last season compared to .188 against righties. Though his career numbers don’t reflect such a significant gap, Robles has certainly been more effective against lefties and the Nationals would likely only hit him leadoff in games started by an opposing left-hander until those splits even out.

Robles spent a chunk of the offseason playing winter ball in the Dominican League, where he began implementing some of his new tweaks into his stance and swing. He’s still working on several of those changes as spring training gets underway, but Robles would still feel comfortable hitting leadoff if the Nationals placed him there.

“I’ve hit in that lineup spot all throughout my minor-league career so I feel very comfortable hitting leadoff,” Robles said Friday through team interpreter Octavio Martinez. “If I get the opportunity then…the main goal is to get on base because I know that once I’m on base I can definitely do some damage helping the team out any way I can.”

For now, Robles has to show his coaches he’s capable of hitting against all types of pitchers. There’s plenty of potential in a Nationals lineup with Robles at the top, he just has to earn it first.

“Spring training is gonna be big for Victor Robles just to kinda get comfortable with some of these new things that he’s set out to do,” Long said. “He’s probably of all the guys I think his spring training is — and Carter [Kieboom] I would say is another one — their spring training is very important to them. We need to see some signs of those guys having some success and doing some things differently than they did maybe last year.” 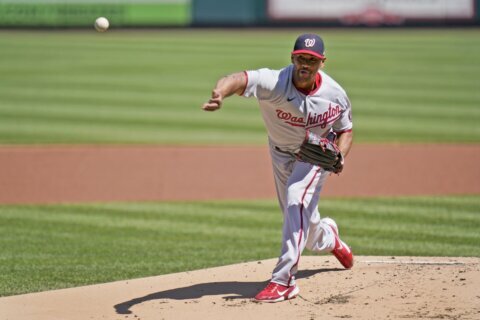 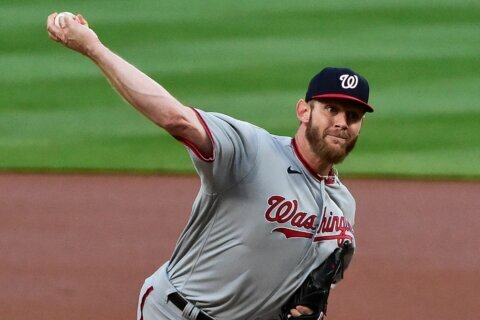