What’s next for the Nationals after acquiring Lester, Schwarber and Bell

With four spots still open on the 40-man roster, the Nationals could have a few moves left in them.
Listen now to WTOP News WTOP.com | Alexa | Google Home | WTOP App | 103.5 FM

What’s next for the Nats after acquiring Lester, Schwarber, Bell originally appeared on NBC Sports Washington

The Nationals have spent the 2020-21 offseason as one of the more active clubs in a time when many teams are shedding payroll rather than adding to it.

Gone is Adam Eaton, replaced by Kyle Schwarber. Eric Thames is out and Josh Bell in. Jon Lester is reportedly Washington’s newest addition, taking the place of Aníbal Sánchez in the rotation. None of these moves represent franchise-altering changes that will be felt for years, but they do signal the Nationals’ intent to compete for a World Series this season.

With four spots still open on the 40-man roster, the Nationals could have a few moves left in them.

According to Cot’s Contracts, Washington will have about $26 million left under the luxury tax threshold once Lester’s reported $5 million deal becomes official. The Nationals have operated with the luxury tax in mind ever since Mark Lerner was named principal owner in 2018, so that number will likely be treated as a hard cap — especially considering the financial losses sustained as a result of the pandemic.

Three of Washington’s available roster spots figure to go toward their bench, but there’s still room for them to find an everyday player. The Nationals need a backup catcher, first baseman and either a utility infielder or fifth outfielder. If GM Mike Rizzo decides to upgrade the lineup once again, he could do so by either replacing Carter Kieboom at third base with a more proven player or adding a catcher with a better bat than Yan Gomes.

Here’s what their offensive depth chart looks like, assuming a five-man bench:

García, after posting a .668 OPS over 40 games last season, is the first candidate to start the season in the minors if the Nationals sign another infielder. The 20-year-old showed flashes of potential but would benefit from everyday at-bats in Triple-A rather than riding the bench in D.C. Noll will likely get sent down as well with the Nationals’ decision on Ryan Zimmerman looming.

While there are creative ways to upgrade the infield, free agent fits include Marcus Semien, Tommy La Stella, Jonathan Schoop, Kolten Wong and Justin Turner. Signing any of those players could push both García and Kieboom down to the minors, which would open up a spot for perhaps outfielder Yadiel Hernández or a third catcher. The Nationals’ options on the trade market are limited given their reported unwillingness to part ways with top prospects Jackson Rutledge and Cade Cavalli.

On the pitching side, the addition of Lester provided much more clarity:

The fifth-starter competition will be worth monitoring in spring training, as Ross is the favorite to beat out Voth and Erick Fedde while several young arms such as Ben Braymer, Seth Romero, Rogelio Armenteros, Joan Adon and Steven Fuentes will have the chance to prove themselves in Grapefruit League play as well. Fedde faces long odds of making the roster given he still has a minor-league option remaining while Ross and Voth would have to be placed on waivers before being demoted.

Washington could benefit from adding an experienced left-handed pitcher to add to its relief corps. Right now, only Clay and non-roster spring training invitee Luis Avilán stand as likely candidates to make the Opening Day bullpen among southpaws within the organization. Free agent closer Sean Doolittle remains a candidate to return while lefties Jake McGee, Justin Wilson and José Álvarez represent some of the cheap options still available in free agency.

The Nationals have been among the busier teams so far this winter, but there is likely still work to be done before the club reports to West Palm Beach in February. 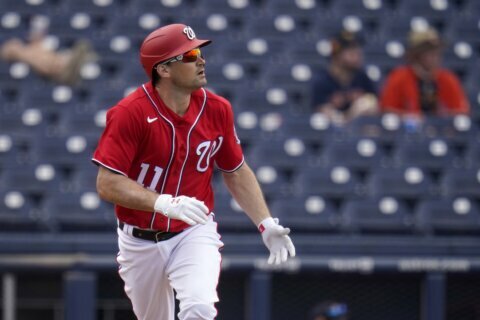