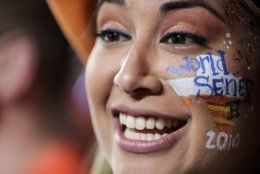 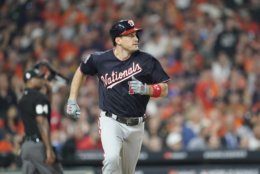 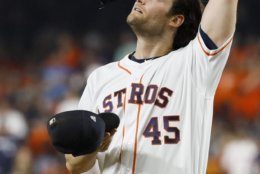 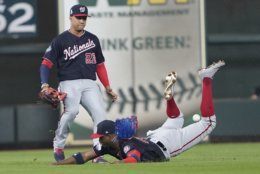 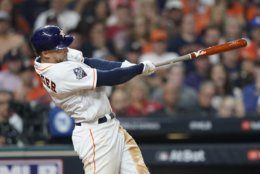 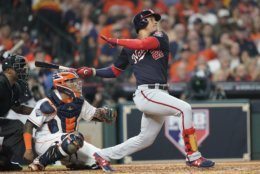 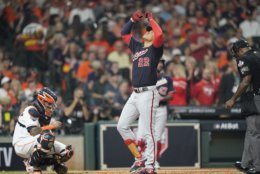 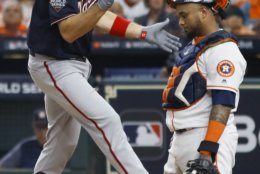 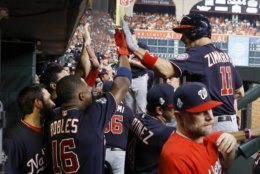 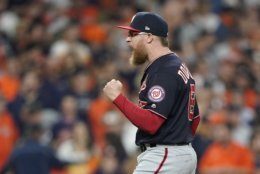 A 20-year-old prodigy with a passion for the big moment, Soto homered onto the train tracks high above the left field wall and hit a two-run double as the Nationals tagged Gerrit Cole and the Houston Astros 5-4 Tuesday night in the World Series opener.

Not even a history-making home run by postseason star George Springer — and another shot that nearly tied it in the eighth inning — could deter Washington.

Ryan Zimmerman, still full of sock at 35, also homered to back a resourceful Max Scherzer and boost the wild-card Nationals in their first World Series appearance — tres bien for a franchise that began as the Montreal Expos in 1969.

Otherworldly almost all season, Cole looked downright ordinary. Trea Turner singled on the second pitch of the game and the Nationals were off and running, ending Cole’s 19-game winning streak that stretched back 25 starts to May.

“I didn’t have my A-game tonight,” Cole said.

Not what Cole or anyone else at Minute Maid Park expected, especially after he led the majors in strikeouts, topped the AL in ERA and finished second in the big leagues in wins to teammate Justin Verlander.

Cole had breezed through the AL playoffs, too.

Yet it was a further testament to an eternal truth about baseball: It doesn’t matter what you do the whole season if you don’t get it done in October.

“I think he’s been so good for so long that there builds this thought of invincibility and that it’s impossible to beat him,” Astros manager AJ Hinch said. “So when it happens it is a surprise to all of us because we’ve watched for months this guy completely dominate the opposition.”

Soto finished with three hits and a stolen base. Three days shy of his 21st birthday, the wunderkind left fielder also snared Michael Brantley’s late try for a tying hit.

Relentless at the plate, he’s already become one of those rare players — like Springer — who seems to turn pressure into production.

How’s he do it? Better launch angle? Improved swing path?

“Sometimes I just put gum in my mouth,” Soto said. “But most of the time, just take a deep breath and focus. It’s just the pitcher and me.”

The MVP when Houston won its first crown in 2017, Springer set a record by connecting in his fifth straight Series game to make it 5-3 in the seventh. But reliever Daniel Hudson threw a fastball past rookie Yordan Álvarez with the bases loaded to end the inning.

In the eighth, Springer put a charge into a drive to deep right-center, and it appeared as though he might’ve hit a tying, two-run homer. Springer took a couple of hops out of the batter’s box to watch, and had to settle for an RBI double when the ball glanced off the glove of a leaping Adam Eaton at the fence.

Heavily favored at the start, the 107-win Astros will try to get even Wednesday night when Verlander faces Stephen Strasburg in another matchup of aces.

Scherzer slipped in and out of trouble for five innings. But every time the stadium got rollicking, he found a way to get out of jams. There’s a reason ol’ Max has won three Cy Young Awards.

“We got old and young guys,” Scherzer said.

Hudson retired José Altuve, and Sean Doolittle got Brantley on a lineout to strand Springer at second in the eighth. Doolittle then closed for a save to give the Nationals their seventh straight victory and 17th in 19 games dating to their September playoff run.

Leading the way was Soto, whose eighth-inning hit in the wild-card win over Milwaukee sent the Nationals on their path.

Soto looked overmatched when he fanned on Cole’s 99 mph heater in the first inning. Turned out Soto was just getting warmed up.

He justified his place in the 4-spot, launching a leadoff drive in the fourth to make it 2-all. He became the fourth-youngest player to homer in the Series, behind Andruw Jones, Miguel Cabrera and Mickey Mantle.

The ball was later retrieved from the train tracks and donated by Soto for a long ride to the Hall of Fame in Cooperstown.

Washington took the lead in the fifth. Eaton hit a tiebreaking single and Soto doubled with two outs for a 5-2 advantage.

After the game, Soto agreed to donate his home run ball to the Hall of Fame in Cooperstown.

Zimmerman hit the first World Series homer in Nationals history, connecting in the second. He was the first player drafted by the team for the 2005 season.

Cole left after the seventh, getting a pat from Hinch in the dugout. Watching from the front row behind the plate was someone who also knows a lot about pitching — Astros executive, Texas great and Hall of Famer Nolan Ryan, the Ryan Express himself.

Yuli Gurriel put Houston ahead with a two-run double in the first.

Nationals: Strasburg was 3-0 with a 1.64 ERA in the NL playoffs. He went 18-6 and set a career high for wins during the regular season.