Whenever Bryce Harper strikes out this week, you can get a $3 pizza

It's been several months since Bryce Harper traded in his Nats uniform for a $330 million record deal with the Phillies, but some in D.C. have long memories, including a local pizza chain.
Listen now to WTOP News WTOP.com | Alexa | Google Home | WTOP App | 103.5 FM

It’s been several months since Bryce Harper traded in his Nats uniform for a $330 million record deal with the Phillies, but some in D.C. have long memories, including a local pizza chain.

&Pizza is giving away $3 pizzas for three minutes from Monday to Thursday any time Harper strikes out.

When Harper strikes out during the game, text #UROUT to 200-03 to receive a code you can use to buy a pizza online or through the &pizza app.

Bryce Harper returns to DC tomorrow + we’re celebrating with $3 pizzas. Whenever he strikes out, text #UROUT to #200-03 to get your code.

Yes, that’s a slithering snake behind a photo of Harper.

Here are the days and times Washington plays Philadelphia this week:

There’s a pretty good chance you’ll get a deal on these pizzas. “He’s been striking out a lot this season,” WTOP sports reporter J. Brooks said.

Harper has struck out 170 times, so far this season. “That’s a lot,” Brooks said.

This is not the first time Harper has endured a ribbing from D.C. fans. During his first game against the Nats since playing for Philadelphia, a ballpark nearly full of boo birds welcomed the superstar outfielder back to D.C. last April. And at his first at-bat against former teammate Max Scherzer, Harper struck out.

Yo homes, smell ya later. pic.twitter.com/3Jf1aR8mJq

Perhaps someday, D.C. fans will be above this level of petty. But it’s not going to be this week. 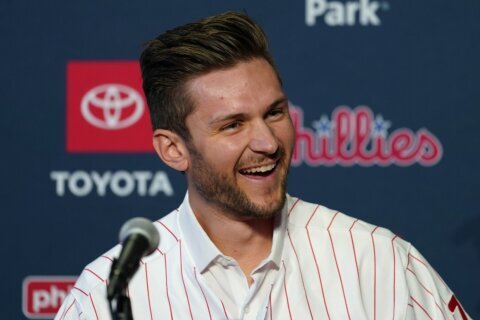