Coronavirus News: Fairfax Co. votes to increase substitute teacher pay | Is it time to get a COVID-19 booster? Which one? | Local cases of COVID-19 | How many in DC region are vaccinated?
Home » Washington Nationals » Nationals players connect with…

Washington Nationals players fanned out across the city Saturday, stepping onto baseball diamonds from Southeast to Northwest D.C. to connect with the game’s youngest players. The Nats visited nine ball fields, handing out Nats ball caps, T-shirts and autographed baseballs to about 5,500 little leaguers and players in the D.C. Parks and Recreation Rookie League. 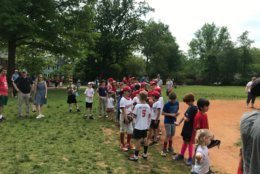 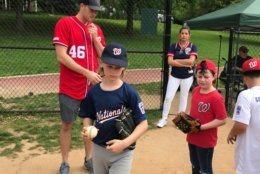 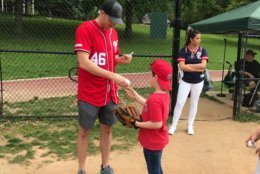 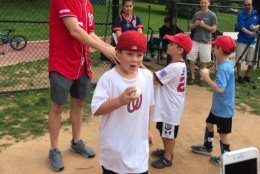 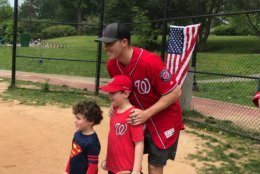 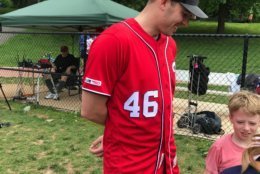 “It’s always great to come out to see kids. I remember being their age and how special it would be for a major league player to come out,” said Corbin, with a squad of little leaguers gathered around his knees.

“Patrick Corbin is a good pitcher and the Nationals are (long pause) doing good this year,” said 8-year-old Kenny Vorrasi, of Chevy Chase with a blush and a chuckle — well aware that while Corbin is off to a fine start this season the Nats aren’t yet playing .500 baseball.

“They’re kind of doing better,” Vorrasi added about the team that’s been riddled with injuries.

The little leaguers, suited up for a game, some with fielders sunglasses secured above the bill of their caps, cued up in a long line to receive baseballs signed by Corbin.

“This is fantastic. It’s a great day. It’s a beautiful day. Everybody’s excited to meet Patrick Corbin,” said Stacie Isenberg, who coaches the Monarchs in the Capitol City Little League.

For veteran little leaguers, it’s not the first time they’ve met a big leaguer. The Nats are in their fifth year of doling out baseball gear to youth players in the District. Saturday’s visits also included trips to ball fields in Annandale and Herndon.

“It’s always good to hear what they have to say about their experience in the majors,” said Evan Weinstein, 12, who has been playing baseball for seven years and has hopes of someday reaching the big league.

Parents and grandparents snapped pictures and recorded video with their cellphones of the kids meeting the Nats star left-handed pitcher.

“Hopefully something I said today sticks with them and they can take it with their career and the rest of their life,” Corbin said.