At the Racing Presidents tryouts, a chance for celebrity under a giant costume

Those in the running for the Racing Presidents went head-to-head in a 40-yard dash, two races from center field to first base and a freestyle dance — all under the 50-pound heads of former presidents. See photos from the tryouts.
Listen now to WTOP News WTOP.com | Alexa | Google Home | WTOP App | 103.5 FM
(1/7) 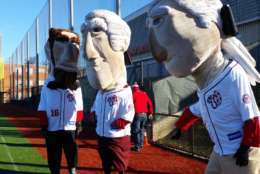 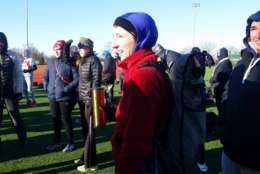 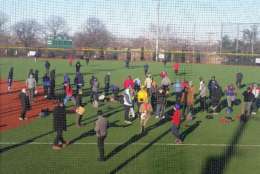 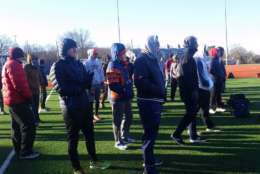 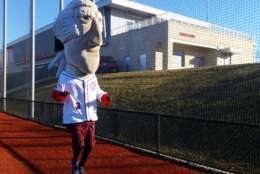 WASHINGTON — Despite the frigid temperatures on Sunday, more people than ever showed up for a shot at becoming one of the Washington Nationals’ Racing Presidents.

Those in the running went head-to-head in a 40-yard dash, two races from center field to first base and a freestyle dance — all under the 50-pound heads of former presidents.

“You need to be able to run in the costume, handle the costume,” said Tom Davis, Washington Nationals’ Entertainment Director. “Tom’s got [the] largest head. In this wind he is going to act like a sail.”

In the 12th year of the tryouts, Davis said Sunday might go down as the coldest and windiest tryout day yet.

But with 58 people, including eight women, wanting a shot at the big leagues — or the presidency — Davis said it was the best year for turnout at the National Youth Baseball Academy in Southeast D.C.

Davis said it’s exciting to have that many women come tryout, especially since no women came out last year.

Aside from the physical tryouts, the Nationals entertainment staff also interviewed every potential future president.

The Racing Presidents greet fans before the game, run the traditional race in the middle of the fourth inning and are a part of the seventh-inning stretch, among other duties.

But the public will never know who makes the cut to be the next bigheaded Abe Lincoln or Teddy Roosevelt.

The identity of the person under the Racing Presidents costume is never revealed.

“This is an anonymous kind of position,” Davis said. “I think that’s part of the reason that it’s become so popular.”

When dealing with the media, the potential presidents were only allowed to give their first names.

Annie had her own little fan club greeting her after coming off the field. She said that after trying out as George Washington, she has even more respect for the Racing Presidents.

To prepare for the tryout, she said she “went to REI and put 50-pounds worth of weights in a backpack and ran around the store.”

Annie said that despite the cold and no matter the results, it was a fun opportunity for her.

“However it shakes out, it was really nice to do this. And I also met a lot of wonderful people this morning.”