Antonio Gibson ran for a career-high 146 yards, scored a touchdown and capped his first 1,000-yard rushing season by leading Washington to a 22-7 victory over New York on Sunday in what might have been Dave Gettleman's final game as the Giants' general manager.
Listen now to WTOP News WTOP.com | Alexa | Google Home | WTOP App | 103.5 FM
(1/12) 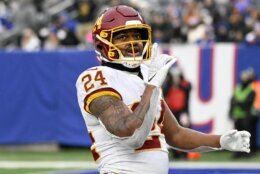 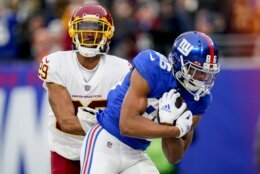 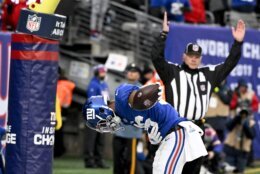 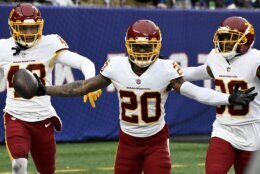 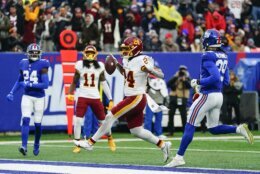 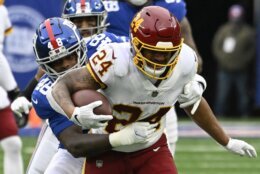 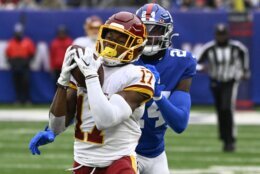 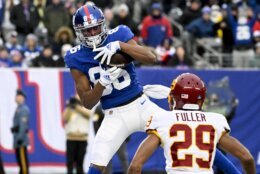 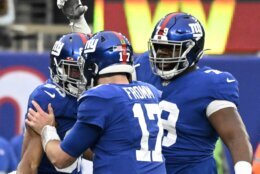 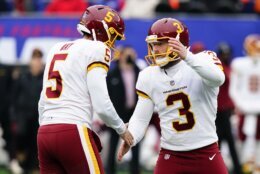 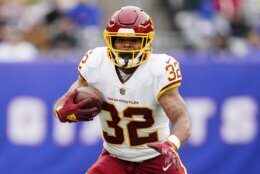 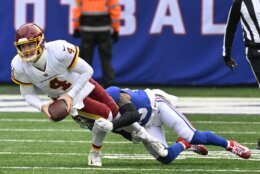 EAST RUTHERFORD, N.J. (AP) — After a final month marred by COVID-19 issues, a fight on the field, a tragic automobile accident involving a passenger in a car driven by a fellow player and a losing streak, the Washington Football Team had something to feel good about after its last game.

Antonio Gibson ran for a career-high 146 yards, scored a touchdown and capped his first 1,000-yard rushing season by leading Washington to a 22-7 victory over New York on Sunday in what might have been Dave Gettleman’s final game as the Giants’ general manager.

Coach Ron Rivera’s major regret after Washington (7-10) ended a season that saw his team go from a division champion to an also-ran was the late four-game losing streak. His team was in position to make a playoff run if it could string some wins.

“If we had, we could be waiting to see what happens later on today,” Rivera said. “And that’s unfortunate. The best thing about it was the way guys rallied around each other, came out and played for one another and really set the tempo and the tone going into the offseason and into next season.”

Bobby McCain returned the first of his two interceptions 30 yards for a touchdown, and Joey Slye kicked three field goals for Washington.

Gibson carried the load with his cutback runs on stretch plays. He finished the season with 1,037 yards, highlighted by a game-clinching 18-yard TD after New York got within 12-7 in the fourth quarter on Jake Fromm’s first NFL touchdown pass.

“I’m putting it out there on the field,” Gibson said. “I feel like with what I’m doing, I can be in this league for a long time as I want to be one of the greats. I got a long road ahead of me. I’ve just got to keep pounding.”

Fromm’s 22-yard touchdown to Darius Slayton was the only highlight for the Giants (4-13), who finished a miserable second season under Joe Judge with a six-game losing streak.

Gettleman’s four-year tenure as GM is likely over after a fourth-straight double-digit losing season. This one was marked by injuries, including one that sidelined quarterback Daniel Jones the last six weeks.

Neither Gettleman nor the team’s ownership spoke after the game.

Judge’s status depends on what co-owners John Mara and Steve Tisch want. He has a group that plays hard, but just doesn’t have enough talent — particularly on the offensive line.

Judge plans to meet with them this week. He refused to speculate on his future. He declined to discuss a hypothetical on working with a new general manager. He was blunt about the season, which came after the team went 6-10 in his first year and missed the playoffs by a game.

“Ultimately, it wasn’t good enough,” Judge said. “And my focus right now is already on next season immediately and changing everything. We have to make every necessary adjustment.”

Slye’s field goals of 23 and 43 yards gave Washington a 6-0 halftime lead and McCain’s interception return made it 12-0 in the third quarter. Washington failed on a 2-point try.

Fromm’s first NFL TD pass got New York within five points early in the fourth quarter, but Washington came right back behind its running game (226 yards) and Gibson.

A year after winning the NFC East with a 7-9 record, Washington’s biggest issues in the offseason will be deciding to draft a quarterback or stick with Taylor Heinicke and to hope defensive lineman Chase Young recovers from his ACL injury.

The Giants, who last made the playoffs in 2016, have a lot of work — and likely lots of turnover — ahead.

“The thing I know about the league is there’s always changes,” Giants defensive back Logan Ryan said. “Change is inevitable in this league and the roster is going to change.”

How much the front office and coaching staff changes remains to be seen.

The Giants’ offense was so inept, the biggest cheers the unit got were when referee Adrian Hill announced backup tackle Korey Cunningham was reporting as eligible. It happened about a dozen times, and Hill announced it two or three times — which each time got the fans going. New York finished with 177 yards in total offense.

NO SAFETY THIS WEEK

Faced with a second-and-11 from their own 2 in the second quarter, Judge had Fromm run consecutive quarterback sneaks, the last on third-and-9 from the 4. It gave Riley Dixon room to punt and avoided another safety.

Washington: S Kamren Curl left in the third quarter with a knee injury.

Giants: RG Will Hernandez aggravated an ankle injury in the first quarter and did not return.

Washington: Finally gets a new nickname on Feb. 2.

Giants: Face changes after a fifth straight losing season. They have made the playoffs once since winning the Super Bowl in February 2012. 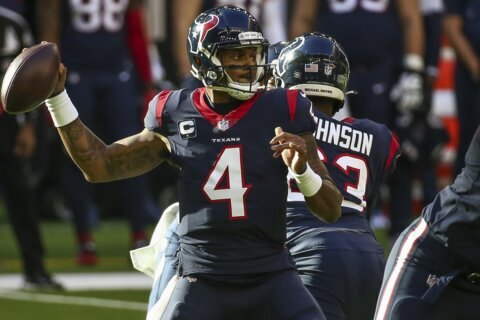