Washington is now at 2-6 through the near-midpoint of its 2021 season. And, as the club enters its Week 9 bye, head coach Ron Rivera plans to use the extra week off to evaluate every position on his roster.
Listen now to WTOP News WTOP.com | Alexa | Google Home | WTOP App | 103.5 FM

For the second straight game, the Washington Football Team was able to muster just 10 points on offense.

For the third straight game, the Washington Football Team was held under 13 points.

And, for the fourth consecutive game, the Washington Football Team walked off the field following 60 minutes of action on the losing end, with Sunday’s Week 8 defeat perhaps the most damning of them all: a 17-10 loss to the lowly Denver Broncos, who had entered the game on its own four-game skid.

Washington is now at 2-6 through the near-midpoint of its 2021 season. And, as the club enters its Week 9 bye, head coach Ron Rivera plans to use the extra week off to evaluate every position on his roster.

“The big thing we have to figure out, going forward, is where are we? That’s the nice thing about this bye week,” Rivera said postgame. “We’ll get the chance to re-evaluate and take a look at a lot of things, kind of come out next week about where we’re headed.”

That includes quarterback, too.

“Yeah,” Rivera said when asked specifically if making a change at quarterback was a possibility. “I’m going to evaluate all [22] positions you have.”

Taylor Heinicke has been Washington’s starter since Week 2. He replaced Ryan Fitzpatrick, the team’s opening day starter, in Week 1 after the veteran went down with a hip injury. He’s had his good moments, certainly, but also struggled at times and shown his inexperience as well.

On Sunday in Denver, Heinicke finished 24-of-39 for 270 yards, one touchdown and two interceptions (it’s worth noting that both picks came on Hail Mary-esque plays). His numbers perhaps look better than Washington’s offense looked overall, as the team faltered one again in the red zone, blowing multiple opportunities to score.

“I thought I played pretty well. I thought we moved the ball really well,” Heinicke said when asked about his assessment of his overall performance. “It’s just the same story as last week. We get down the red zone area and for some reason we stall out.”

Last week against Green Bay, Washington went without a touchdown in four red zone trips. On Sunday, the group went 0-for-2 in the red zone. And, for the second straight week, Washington’s offense outgained its opponent by over 100 total yards, but still managed to finish with fewer points.

“In most of the games, we’ve moved the ball well. It’s not like we’re not getting a lot of yards,” Heinicke said. “I think we’re driving and we’re sustaining long drives. Again, it’s just when we get to that 35-yard line, to the 20, for whatever reason we just stall out. The name of the game is to score more points than them. It’s something we just continue to work on every week and try to get better at.”

When asked if he was worried about his job security, Heinicke said he was not going to speak on it because it’s out of his control and “it’s not [his] decision.”

But, the 28-year-old promised to continue giving it his all for the franchise, whether he remains the starter moving forward or not.

“The biggest thing I do is I go in that facility every single day and I give it my all. That’s all I can do,” he said. “I control what I can control. I felt like I’ve gotten better throughout the weeks, but obviously, it’s just not been enough lately. Every day I’m trying to get better, figure out what I can do to maybe score more points or anything. I just try to control what I can control and go from there.” 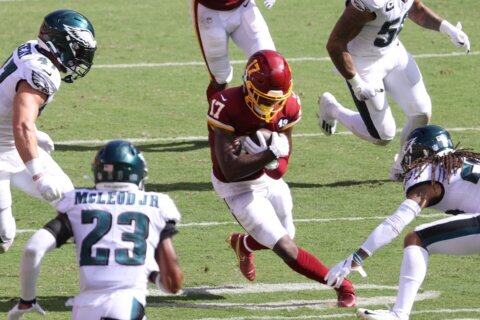