Three days after the Washington Football Team secured its first win of the 2021 season thanks to a game-winning kick from Dustin Hopkins, the NFL franchise 40 minutes up I-95 will look to do the same.

The Baltimore Ravens host their “kryptonite” for a marquee Sunday Night Football fixture on NBC, as the Chiefs come to town after a comeback victory over AFC North challengers Cleveland. Coming off a Week 1 33-27 overtime loss in Las Vegas to the Raiders, the Ravens are dealing with significant injuries and an ailing pass defense.

Washington will play Kansas City at home in Week 6.

Here are three things for Washington fans to watch in this exciting matchup.

Will Lamar Get His First Win Against The Chiefs?

Jackson has lost eight regular-season games since becoming the starter for Baltimore, and three of them have come against the Super Bowl LIV champions. His fourth start of his career came in a thrilling 27-24 overtime loss to the Chiefs. Instead of that game becoming the start of an epic rivalry between Jackson and Patrick Mahomes, the latter has led his team to progressively more comfortable victories.

A fourth-quarter comeback effort came short in their 33-28 loss in 2019. Last year, Kansas City blew the door open with a 34-20 win and limited Jackson to a career-worst 97 passing yards.

But with his two starting running backs gone for the season due to preseason injuries, plus an injured Ronnie Stanley at left tackle, Jackson will be called upon to put in a magical performance for Baltimore to have a chance on Sunday night.

In their last encounter, Mahomes was perfect. He finished with 385 yards, four touchdowns on 32-of-41 passing for a 133.5 quarterback rating. It’s no secret how hard it is to limit Jackson’s passing prowess, but it’ll be a perfect storm for the Ravens to overcome.

With Marcus Peters suffering a season-ending injury during a preseason practice right after Gus Edwards went down, the Ravens had a tough go of it making up for the loss of their No. 1 cover man. The Raiders took full advantage as Derek Carr finished with 485 yards and two TDs, including the game-winning score to Zay Jones in OT.

With Mahomes coming to town, Baltimore’s struggling pass defense will have to deal with an impressive arsenal of weapons. That cast includes the best tight end in the game in Travis Kelce, the fastest route runner around in Tyreek Hill, and Clyde Edwards-Helaire coming out of the backfield.

Those three were the leading receivers in Kansas City’s opener, as Hill popped off for 11 catches and 197 yards and a score, while Kelce caught two TDs himself. The Browns led the whole game until the fourth quarter, but with weapons like those, the Chiefs are truly never out of it.

Does Baltimore Go Back to Ty’Son Williams?

With Edwards and J.K. Dobbins out for the year, Ty’Son Williams was given an opportunity to showcase what he could do last Monday night. He provided a great spark in the first half, rushing for 64 yards and a TD.

But head coach John Harbaugh and offensive coordinator Greg Roman turned to new signing Latavius Murray, who finished with 28 yards on 10 carries, in the second half. Trying to keep Mahomes’ wonder arm off the field as much as possible will be a big priority for the Ravens and getting the best out of Williams could be an avenue to go. Also, Baltimore’s rush blocking was far superior to their ability to protect Jackson in the pocket, conceding three sacks – including the strip-sack in OT that led to the game-winner.

Entrusting Williams to be Baltimore’s difference-maker in his second career game is a huge step, but could be what helps the Ravens get their first win over their nemesis since 2012. 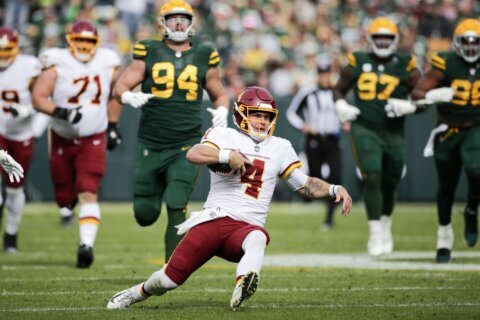