The Washington Football Team moved quarterback Alex Smith off the Physically Unable to Perform list Sunday morning, clearing the veteran QB for football activities after his 21-month rehabilitation from a gruesome leg injury he suffered in Nov. 2018.

Smith is practicing with the team on Sunday and according to Washington Head Coach Ron Rivera, his return isn’t just symbolic.

“I think this is a guy that becomes part of our equation,” Rivera said of the 36-year-old quarterback. “I mean it’s the truth of the matter is that he’ll be part of a competition going forward.”

Smith’s wife Elizabeth hinted toward the move to clear Smith in an Instagram post Saturday, writing “Hard work pays off! Lots to celebrate in the Smith house tonight,” in the caption of a video in which she sprays her husband with a bottle of Champagne.

Hard work pays off! Lots to celebrate in the Smith house tonight.

Smith told ESPN in July that he was cleared by his personal doctors to return to the field, but Washington’s team doctors exhibited additional caution before clearing him Sunday. The quarterback broke the tibia and fibula in his right leg during a November 18 game against the Houston Texans and has since undergone 17 surgeries due to infection.

Doctors considered amputating his leg and Smith nearly lost his life. But the quarterback was determined to make a return to the field.

The NFL season is set to begin in 28 days. The Washington Football Team took to Twitter on Sunday to make the announcement and to post pictures of the quarterback working out with the team.

The next step in the comeback…

Alex Smith has been activated off the PUP list. pic.twitter.com/keDJK51PV7 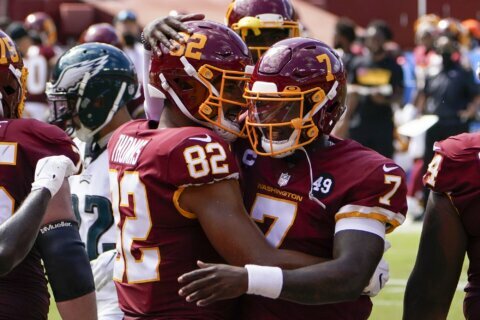