The Washington Football Team continues to be under intense scrutiny after a Washington Post report about more allegations of a toxic workplace. Here's what to know.
Listen now to WTOP News WTOP.com | Alexa | Google Home | WTOP App | 103.5 FM

Several more former employees of the Washington Football Team have outlined a pervasive culture of fear and abuse, along with incidents in which cheerleaders and female employees were exploited or mistreated in the time since Dan Snyder has owned the team, The Washington Post reported.

Many of the employees who spoke to the news outlet said they were doing so in reaction to Snyder’s comments on an earlier story outlining a toxic culture for female employees. Several front office members accused of misconduct were in Snyder’s inner circle, and three of them left shortly before the earlier article was published.

The former employees said they were angered by Snyder’s attempts to put distance between himself and the culture that developed under his tenure.

Snyder, in a statement Wednesday, called the most recent story a “hit job,” and while admitting that he had been “hands-off as an owner,” he denied the allegations made in the story.

The team addressed the allegations in a statement Wednesday night.

“We are deeply distressed by these terrible allegations and are committed to investigating them fully,” the team said. “Our priority is creating a culture where our employees – on and off the field – are respected and empowered.

Our first concern is for the safety and security of our teammates, and we have encouraged any employees who have endured similar experiences, now or in the past, to report it immediately. We are already taking a series of additional steps to hold ourselves accountable to our commitments.”

A former cheerleader for the Washington Football Team, Tiffany Bacon Scourby, told the news outlet that at a 2004 D.C. charity event called “Fight Night,” which several of the team’s cheerleaders worked at, Snyder approached her and seemed to proposition her to sleep with his longtime friend, Anthony Roberts.

Scourby told The Post that she declined and walked away. She said it was not clear if Roberts knew of the proposal.

Another ex-employee alleged that Larry Michael, the former longtime broadcaster for the team and vice president of broadcasting, asked for outtakes from a behind-the-scenes video detailing the making of the team’s 2008 cheerleader calendar — scenes where cheerleaders’ bare breasts were exposed as they repositioned between shots, or any other salacious moments from the footage.

The employee said Michael referred to the footage as “the good bits,” or “the good parts,” and requested that the outtake cut be burned onto a DVD titled “For Executive Meeting.”

The Washington Post obtained a copy of the outtake footage and used the file’s metadata to confirm its authenticity. Michael denied having any part of the footage’s creation.

The Post showed the footage to several people who were previously cheerleaders at the time the footage was made, or involved with the squad. All said they had no idea the alternate cut existed.

Other allegations by former employees outlined a culture of fear at the team, where the human resources department was ill-equipped to settle claims of harassment.

There were also rules in place that only applied to women in the office, such as not being allowed near the players so they would not “distract” them.

“While I was unaware of these allegations until they surfaced in the media, I take full responsibility for the culture of our organization,” Snyder in his statement later Wednesday. However, he took issue with the allegations in the article, saying Scourby had never reported any of the claims to the team and denied the existence of the videos.

“This article is riddled with questionable and unnamed sources, decades old allegations and is not a reflection of The Washington Football Team today,” Snyder said.

NFL Commissioner Roger Goodell said later Wednesday that the league would launch their own investigation into the allegations brought forward in The Washington Post report.

New from the NFL pic.twitter.com/zgAD1DsHTt

“We strongly condemn the unprofessional, disturbing and abhorrent behavior and workplace environment alleged in the report, which is entirely inconsistent with our standards and has no place in the NFL,” Goodell said in a statement. “An independent investigation into these issues is in process, led by highly experienced counsel recommended by our office.”

New Washington Football Team President Jason Wright wrote in a tweet, “We are all feeling weighed down by the hard to read accounts.

We are now setting a new culture, we will take swift and decisive action, and we will lift the heaviness my colleagues are feeling today. Our journey starts now.”

I’ve spent the day talking to our @WashingtonNFL family. We are all feeling weighed down by the hard to read accounts. We are now setting a new culture, we will take swift and decisive action, and we will lift the heaviness my colleagues are feeling today. Our journey starts now. https://t.co/a3pfNIuvSs 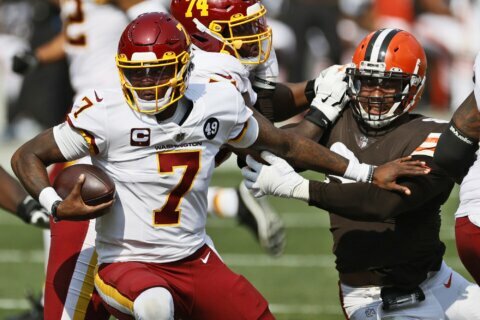 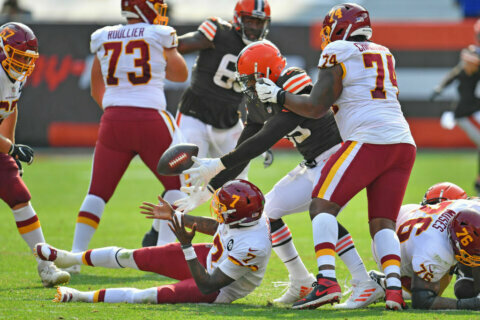 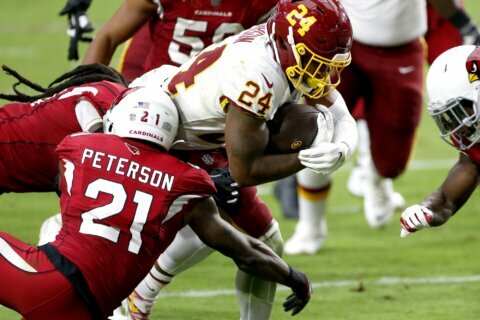