After he spent 20 NFL seasons as a player for Washington, it could be argued Darrell Green bleeds Burgundy and Gold. But the legendary cornerback agrees it is time to change the name of the team that has been such an important part of his life.

“I applaud [owner] Daniel Snyder for making this decision,” said Green. “I think that is the right decision. I think that it’s part of the tapestry in the nation of what I call the reconciling of history that has taken place. There are people who have been offended for so many years and that pain needs to be addressed. I’m glad that we can begin this process.”

It is a process that many believe is long overdue. Over the years, many have been critical of Snyder for his steadfast reluctance to consider a name change. In a 2013 USA Today interview, Snyder even went as far as to tell a reporter to put in capital letters “NEVER” when he was asked if he would ever change the name of his football team.

Green is not concerned with what Snyder said in the past or why he is changing the team name now. To move forward, Green believes it is important to focus on the bottom line that a name change for Washington’s NFL team is going to happen.

Perhaps part of what made Green a Hall of Fame player was his ability to always move forward, look to the next play and not live in the past. The next play for Green’s beloved NFL team is a big one. And Green, who holds Washington’s franchise record of 295 games played, understands the strong links many fans have to a team name that has lasted 87 years.

“Some people have buried family members in my jersey,” said Green. “Some people have all kinds of moments that they remember. I’m not trying to hurt your feelings on that, but I am trying to reach you, as a fellow human. You can still have the memories, but we need be compassionate and considerate of people who have been offended by the name. I’m telling you what my heartbeat is. And I believe it’s the right thing, it’s the right thing.”

As for Washington’s new name, Green favors Red Tails, which was a nickname given to the Tuskegee Airmen, the first Black aviators in the U.S. Army Air Corps.

Right now, there is not a lot of peace surrounding discussions over the coming name change for Washington’s NFL team. Mention name change, and it can still trigger a passionate debate — but Green is optimistic for future acceptance of a new name for the team he won two Super Bowls with.

“I think we’ll get through this,” said Green. “People will appreciate that it is about humans and how we treat one another and that gets to be first place on the menu. We’ll have a new team in Washington, by name of course, and we will move forward. I really believe that we will look back at this as a good thing and go from there.” 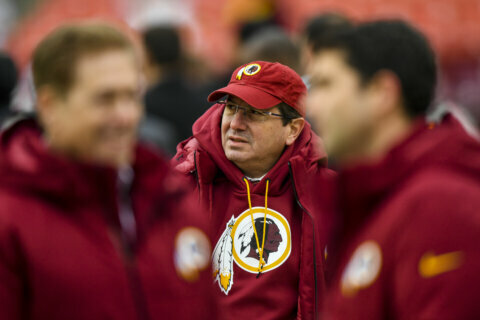 Column: It took financial pressure for Snyder to change name