After exiting the 2021 campaign with the NFL’s second-worst third-down defense, Jack Del Rio’s starting unit could’ve really used a strong preseason opener against the Panthers this past Saturday.

Instead, the group showed more of the same.

Carolina’s offense converted the opening trio of third downs that it faced at FedEx Field and if not for a fumbled snap, Baker Mayfield’s crew might’ve upped that total and ended with six points as opposed to the three they put up on their initial possession.

When asked Wednesday for his thoughts on that stretch of the game, Del Rio was frank.

“My reaction is not to overreact,” he said, “but I didn’t like it.”

“We’ve certainly identified we want to be a defense that starts fast,” Del Rio added later on in his answer. “Letting them get three first downs on third down once we got them to third down is not starting fast. That’s something we’ve identified as a must-do.”

Under Del Rio in 2020, which marked his first go-round as the club’s defensive coordinator, the team posted the seventh-best third-down performance across the league; opponents kept drives alive just 37.8% of the time.

“We’ve been talking about it,” Bobby McCain said Wednesday. “Ever since last year, really.”

Just before Del Rio’s turn at the podium, Ron Rivera had a chance to address the important issue as well. In his opinion — which is a logical one — the action that precedes third down must be fixed, too.

“When we went back and studied last season, one of the things we saw is our deficiencies in second-down defense,” Rivera said. “We can’t allow ourselves to be in second-and-10, then end up in third-and-4, third-and-3, third-and-5. That’s where it begins. It starts with that. Keep the momentum.”

Fortunately — and praising this feels a bit/very odd, because of course this should be a priority — it sounds like the Commanders are going to adjust their approach in an effort to let the squad’s better pieces take charge.

“Guys need to step up,” Rivera said. “We’ve changed some things as far as what we do to fit a little bit more of that.”

As for McCain, he’s confident that more intense prep — the kind that comes in the fall as opposed to the summer — will produce the satisfactory results that everyone involved in the operation are desperate for.

“When we game plan and we go in and know what a team’s running, we know what we’re running and what we’re doing, it’ll clean up,” the safety said.

Saturday’s second preseason tilt versus the Chiefs will be Washington’s next opportunity to thrive on third down — or, if Patrick Mahomes plays legitimate snaps, maybe be exposed again.

Regardless, the Commanders coaches and defenders have had months to ruminate on their key flaw and come up with ways to solve it. Their first attempt wasn’t promising, but it also doesn’t matter in the end because it’s only August.

However, should the trend once again dominate the discussion in 2022, Del Rio and a chunk of the roster might not be around to answer for their shortcomings any longer. If they allow offenses to continuously move the chains on them, it’ll likely be necessary for them to move on. 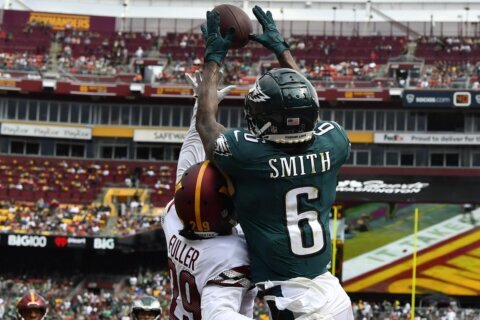