In a statement, a spokesperson for Anheuser-Busch said that the company “has decided not to renew its sponsorship of the Washington Commanders team at this time. We remain fully committed to Washington football fans, and we look forward to continuing our long-term partnership with the NFL and our other 26 team partners to create meaningful experiences and connections for fans across the country.”

No specific reason has been given for Anheuser-Busch’s decision, or whether it would be ending sponsorships with other teams in the NFL.

Anheuser-Busch has been one of Washington’s biggest sponsors, with team quarterback Taylor Heinicke among its 25 player endorsements.

This is the third major sponsor the Commanders have lost over the past year. In February, Medliminal, a medical billing company in Northern Virginia, chose to not renew its sponsorship for the team. Health care company Inova also ended its partnership with the Commanders in April 2021.

Inova’s sponsorship deal, which was originally supposed to last until 2026, was cut short by about five years.

The loss in sponsorships comes as the NFL hired former Securities and Exchange Commission chair Mary Jo White to investigate an allegation that Washington Commanders owner Dan Snyder sexually harassed a team employee more than a decade ago.

White will detail her findings in a written report, which will be released to the public because the allegation against Snyder was made in a public forum.

Following the probe, NFL spokesman Brian McCarthy said, Commissioner Roger Goodell will determine “any appropriate action” against Snyder, who last year was fined $10 million after a previous investigation into widespread sexual harassment and mistreatment of women by high-ranking team employees. Snyder also temporarily ceded day-to-day operations of the franchise to his wife, Tanya.

The findings of that investigation have been kept from the public, and the House Committee on Oversight and Reform has been pressing the league to hand over documents from the probe. Goodell has said the investigation was kept under wraps to protect the anonymity of team employees who spoke to attorney Beth Wilkinson. 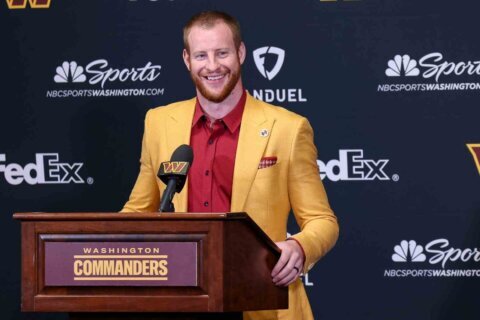