RICHMOND — New Redskins safety D.J. Swearinger has quickly emerged as one of the leaders on this revamped Redskins defense. It’s evident early in camp that he likes to set the tone on the field and his teammates are following.

“I have to bring that because I’m a natural born leader,” Swearinger said on Tuesday. “My mom always told me to lead, not to follow. That’s what I’m doing here.”

Swearinger’s voice is one you can hear a lot during practice, whether it be having fun or trash talking.

“It gets us going a lot,” he said. “If the offense hears me yelling, once they make a play they want to yell too and it’s a competitive thing.  Both sides want to compete better.”

He will wear number 36 for the Redskins, a number he chose for a couple reasons.

“First and foremost, because of my family’s numbers — (it was) my dad and two of my uncles’ number,” he said. “I’ve had the number since ninth grade. My favorite player Sean Taylor wore it here. I want to follow his footsteps. I want to make 36 my number.”

Drafted in the second round by the Texans in 2015, Swearinger now finds himself on his fourth team of his young career. He hopes Washington is a place he can call home for a while.

“It’s been a long journey, these last four years from Houston, Tampa, Arizona to here,” he said. “I feel like now I’ve finally got a home. I feel like this is home. When I’m out there practicing, it feels great. It feels like I’ve known these guys for the last five years. I definitely feel at home.”

The Greenwood, South Carolina native has some hometown familiarity in the secondary with him.  He’s reunited with his Greenwood Eagles high school teammate Josh Norman.

“It means a lot,” he said. “We hold Greenwood high. You know, small country town. To have two guys on the same team from Greenwood is amazing. I can’t wait to get back out there with Josh and do what we used to do.”

Swearinger was also drafted with another high school teammate in Houston, Sam Montgomery.

As you can imagine, his high school defenses were pretty good.

“Our defense was definitely No. 1 every year. We won a state championship in 2006.”

Only time will tell if Swearinger can bring that success to this years Redskins defense, but he likes the direction under the new leadership.

“I love this defense,” he said. “I love where we’re headed with Coach Manusky. The sky is the limit. I’ll definitely be able to make a lot of plays in this defense.”

Fans will love to hear that, especially after the struggles this team had on defense a year ago. 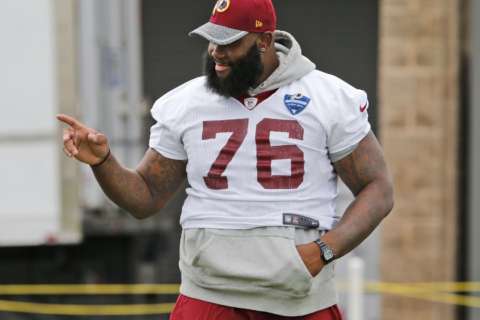