Sergachev is the first NHL defenseman to have a four-point period since Toronto’s Morgan Rielly on Oct. 15, 2019, He tied the team record for points in a period.

Nikita Kucherov, Nick Perbix Cole Koepke and Nick Paul also scored for the Lightning, and Andrei Vasilevskiy made 19 saves. Koepke’s goal in the third was his first in the NHL, coming in his 13th game.

Tampa Bay was beaten 5-1 by Washington on Friday night.

“I thought our response today was what we needed,” Lightning coach Jon Cooper said. “I think we learned a good lesson on how to respond. I loved our response.”

Steven Stamkos had his goal drought reach 10 straight games, but picked up two assists. The Lightning captain has 987 career points, moved past Dave Keon (986) into 98th place on the NHL list. His 499 assists moved him within one from joining Martin St. Louis (588) as the only Tampa Bay players to reach 500.

Washington star Alex Ovechkin was held without a goal for the third straight game and remains 13 away from tying Gordie Howe (801) for second all-time. He received a double minor for high sticking Stamkos during the second.

Washington assistant coach Kevin McCarthy filled in again for coach Peter Laviolette, who is in COVID-19 protocols and missed his second straight game.

Sergachev opened the scoring from the blue line 1:23 into the game. After assisting on Kucherov’s power-play goal at 8:19 and Perbix’s goal just under three minutes later, Sergachev made it 4-0 on the power play with 3:38 left in the period, ending Kuemper’s night.

The Lightning went 2 for 4 on the power play, while Washington failed on six chances.

Ovechkin got the Capitals’ first shot from the high shot with 2:50 remaining in the first

Sheary got the Capitals on the scoreboard late in the second.

Koepke made it 5-1 with 6:49 left in the third before the teams combined for three goals in a 59-second stretch late. Eller pulled the Capitals back within three with 3:01 remaining, but Paul got one back for the Lightning 17 seconds later. Hathaway capped the scoring with 2:02 to go.

Koepke’s goal was not determined until a video review after teammate Brandon Hagel scored on the same shift.

“That’s a first,” Cooper said. “It was fitting in the locker room, Hagel gave that goal puck to Koepke.”

Koepke thought the puck may have hit the post as play continued.

“It feels great,” Koepke said. “Something you look forward to.”

Washington forward Nicolas Aube-Kubel, assessed a match penalty for a check to the head of Lightning defenseman Cal Foote on Friday, served the first game of a three-game suspension for the hit.

“It wasn’t intentional,” McCarthy said. “It’s a fast game, obviously. You just have to live with the consequences.”

Lightning: Foote is day to day. … D Erik Cernak, who had a shot from Ovechkin hit his lower leg Friday is day to day, while Sergachev played after taking an Ovechkin shot off the arm.

Capitals: At Florida on Tuesday night. 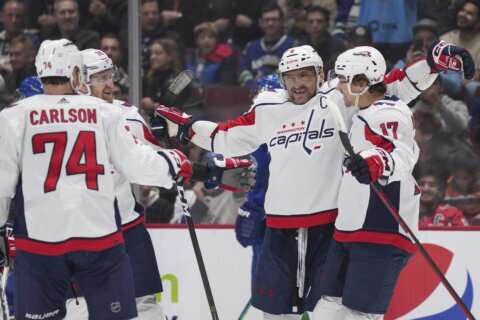 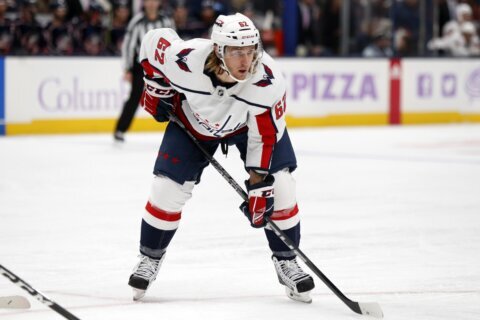