Capitals overhaul roster most of any contender in the East

Several hours into NHL free agency, the Washington Capitals had two new goaltenders and a replacement for the defenseman they lost to Seattle.

They were far from done. They traded for winger Connor Brown, signed forwards Dylan Strome and Henrik Borgstrom and defenseman Gabriel Carlsson, and brought back versatile homegrown product Marcus Johansson to extend his second stint in Washington.

While the New York Rangers made a splash by adding Vincent Trocheck and the Columbus Blue Jackets did the same by signing Johnny Gaudreau, no Eastern Conference contender overhauled its roster more than the Capitals. Now with Darcy Kuemper as their starter in net and Charlie Lindgren backing him up, they hope these moves are enough to compensate for injuries that will keep key players out for at least the first month of the season, and in one case likely much longer.

“I’m excited about our acquisitions and anxious to see how they look in the lineup,” general manager Brian MacLellan said this week. “We’re happy. We accomplished what we wanted to do, starting with the goalies. And then we added some forwards that are pretty complementary players to what we already had.”

Enter Brown, who arrived from the Ottawa Senators in a trade that cost the Capitals a 2024 second-round pick. The 28-year-old going into the final year of his contract could fill Wilson’s spot on the first line alongside Alex Ovechkin and Evgeny Kuznetsov and also play important minutes on the penalty kill.

“I see myself a top-notch killer, and I think I will be able to help the penalty kill in a big way,” Brown said. “Defensively as a forward, I steal pucks and play tenacious, and I like to consider myself as doing a little bit of everything.”

Strome, who scored 22 goals and is just 25 years old, was not tendered a qualifying offer by the rebuilding Chicago Blackhawk. He could be Backstrom’s replacement if needed.

“Obviously I like to produce offense, like to help on the power play,” Strome said. “That’s where I’m at my best.”

Naturally, the Capitals weren’t the only team in the East to make waves in recent weeks.

A trip to the East final perhaps came ahead of schedule for the Rangers thanks to Vezina Trophy-winning goaltender Igor Shesterkin and coach of the year finalist Gerard Gallant. Now New York is making moves to establish itself as one of the top teams in the conference.

Signing Trocheck for seven years and $39.375 million is another step toward doing that. Trocheck is an upgrade at center over Ryan Strome, who left for Anaheim, and he could be a star alongside winger Artemi Panarin.

The Rangers also started the goalie carousel spinning by trading Alexandar Georgiev to the defending champion Colorado Avalanche. They replaced him with veteran backup Jaroslav Halak.

The most important goal was to keep the band together, and the Penguins did that by re-signing defenseman Kris Letang for six years and Evgeni Malkin for four. Together with Sidney Crosby, they’ve won the Cup three times since 2009 and can be part of whatever on-the-fly retooling GM Ron Hextall wants to to.

Much like the Capitals, the Bruins face injury woes that will drag into next season, with first-line left winger Brad Marchand undergoing surgery on each hip and No. 1 defenseman Charlie McAvoy having arthroscopic surgery on his left shoulder.

With that in mind and new coach Jim Montgomery taking over, GM Don Sweeney cleared room for not one but two longtime centers to come back. Patrice Bergeron was expected to return for at least one more year, and David Krejci also could be back after playing one season at home in Czechia.

The Bruins acquired winger Pavel Zacha from New Jersey for center Erik Haula, a move that should boost scoring.

Columbus was the surprise winner of the “Johnny Hockey” sweepstakes after signing Gaudreau for $68.25 million over seven years.

GM Pierre Dorion has made no secret of the team shifting from rebuilding to winning, and his goal is for the Senators to play meaningful hockey deep into the spring. Now they look like they can do just that.

Beyond shoring up their center position by swapping Zacha for Haula, the Devils signed elite playoff performer Ondrej Palat and acquired goalie Vitek Vanecek from Washington. It took only swapping draft picks to get Vanecek, who signed a $10.2 million, three-year contract to compete with Mackenzie Blackwood for the starting job.

New Jersey missed out on Gaudreau, but is another few strides closer to win-now mode and can now put a scare into more top teams around the NHL.

“I think this is a team that is ready to take that next step,” GM Tom Fitzgerald said. 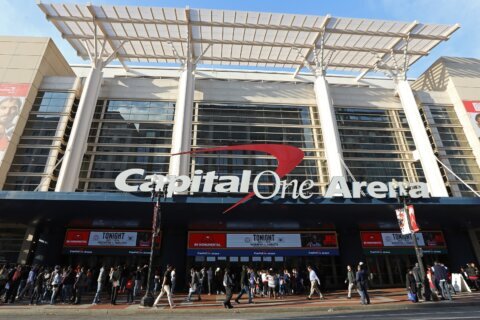