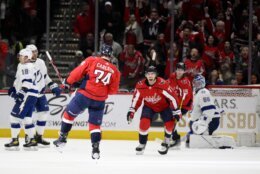 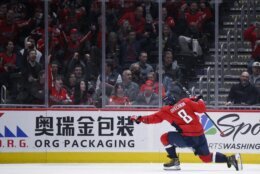 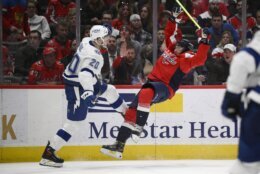 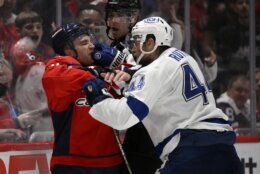 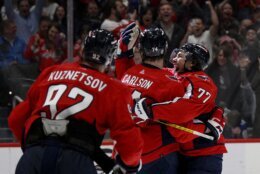 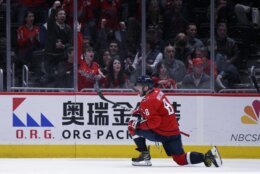 Carlson scored twice and added two assists for a four-point game, Ovechkin reached 1,400 career points with his 43rd goal of the season and the Capitals beat the back-to-back defending Stanley Cup champions 4-3 on Wednesday night to snap their own skid at two.

Chuck Berry’s “Johnny B. Goode” — Carlson’s goal song — actually played three times, though one was disallowed because he went offside prior to scoring. The two that counted came on perfect shots on the power play to beat reigning playoff MVP Andrei Vasilevskiy.

“Clearly, Carlson was hot tonight,” Lightning coach Jon Cooper said. “Everything he was shooting, either he was scoring it or somebody was.”

It was the third four-point game of Carlson’s career, though the defenseman would have loved to finish off the hat trick.

“That would be pretty cool, obviously,” he said. “Never had one. Just got to keep trying.”

Ovechkin also beat Vasilevskiy on a broken play to notch his 773rd goal. He became the 21st player in NHL history to reach 1,400 points, and fans gave the longtime captain and face of the franchise a standing ovation for reaching his latest plateau.

While a five-goal first period doesn’t scream great goaltending, Washington’s Ilya Samsonov made a handful of crucial saves on Lightning scoring chances created by teammates’ mistakes. Samsonov most memorably denied 2019 MVP Nikita Kucherov on a 2-on-1 rush with Brayden Point.

Samsonov was making his first home start since allowing three goals on 10 shots and getting the hook after the first intermission Feb. 28 against Toronto. The 25-save performance adds more uncertainty to the Capitals’ situation in net amid Vitek Vanecek’s recent struggles and with the start of the playoffs less than six weeks away.

“He made a couple of big saves throughout the game,” Capitals coach Peter Laviolette said. “You need that. You need those big ones, and I thought he was good.”

Tampa Bay and Washington are both headed to the postseason: the top eight in the Eastern Conference have been essentially locked in for months. Still, the champs from the past two playoffs and the 2018 Cup winners want to get themselves together before the first round.

“It’s two teams that are probably trying to find themselves and get in a groove as the season comes down to the end,” Cooper said before the game. “Two veteran teams, two older teams — there’s probably a lot of similarities in the two of us.”

Even though the Capitals were playing their third game in nine days and the Lightning went through a lengthy, hard-working practice Tuesday, the similarities were more in the sloppy play on either side that contributed to entertaining hockey.

The Lightning left Capitals defenseman Martin Fehervary wide open on his goal. A failed clear by Washington turned into Kucherov’s goal, and Nick Paul beat Capitals players to a loose puck for his second in nine games with his new team.

Penalties set up Carlson’s blasts on the power play and also made things interesting late. Ross Colton scored on the power play with 2:50 left in the third period to make it a one-goal margin in a showdown that got heated at times.

It might take a couple of series wins for Tampa Bay and Washington to see each other again this spring. But their final regular-season meeting and the Capitals’ first victory of the three should provide some valuable lessons about what it will take to win in the playoffs.

“You want to try to work out the kinks as you go towards the playoffs,” Lightning captain Steven Stamkos said. “At the end of the day, that’s where teams are judged.”

NOTES: Capitals winger Tom Wilson left early in the third but returned later in the period. … Lightning defenseman Ryan McDonagh missed a seventh consecutive game with an upper-body injury. … Capitals forward Garnet Hathaway was a late scratch with illness. Connor McMichael replaced him in Washington’s lineup and Lars Eller was moved down to left wing on the fourth line.