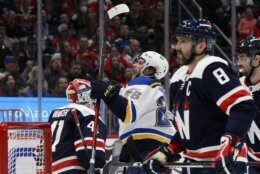 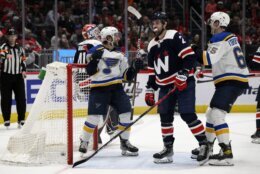 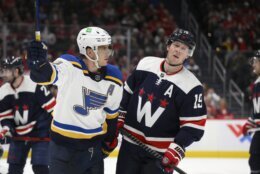 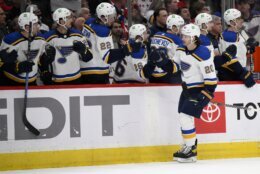 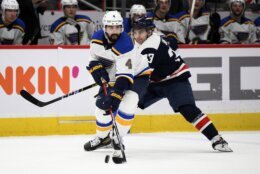 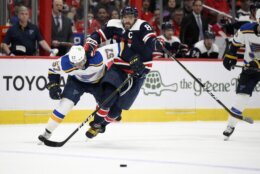 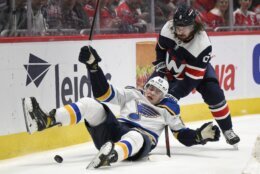 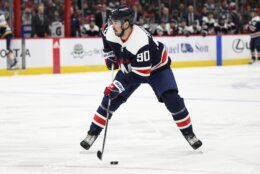 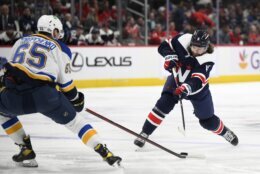 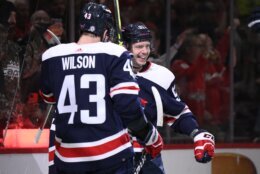 WASHINGTON (AP) — Ravaged by injuries and other absences all season, the St. Louis Blues may need to fill another big void in the lineup.

They put together a strong 60-minute effort to beat the Washington Capitals 5-2 Tuesday night and snap a three-game skid, but lost defenseman Torey Krug to an apparent left hand or wrist injury.

“It’s frustrating,” said captain Ryan O’Reilly, who scored a power-play goal. “Obviously he’s a huge part of our team. … Hopefully a speedy recovery and he’ll be back soon. But it’s always tough.”

Coach Craig Berube refused to say anything more than Krug left with an upper-body injury. His team was already missing winger Rob Thomas to injury and Vladimir Tarasenko for a second consecutive game because of an illness.

Krug going down looks like just another obstacle for St. Louis to overcome.

“We’ve done it all year,” Berube said. “No different. It’s the way it is. What are you going to do?”

Ideally the Blues keep putting in performances like that to keep pace in a tight Central Division playoff race. They left Washington with an important victory thanks to a goal and an assist from Brandon Saad and Brayden Schenn, the game-winner from Nathan Walker hours after he was called up and 19 saves from Ville Husso.

David Perron added an empty-netter to extend his goal-scoring streak to seven games. Every goal but Perron’s was scored in tight around the net, which was a point of emphasis going in.

“We wanted to make sure we were getting to the net, making it tough on the goalie and we wanted pucks there,” O’Reilly said. “I thought we did a good job of that. We had a mindset of shooting and going to the net hard and got some good bounces that we put away. That’s the urgency we need.”

Thanks to a series of turnovers and defensive zone miscues, the Capitals lost a second consecutive game in regulation to fall to 7-2-1 in March. Tom Wilson had a goal and an assist, Evgeny Kuznetsov scored and Vitek Vanecek allowed four goals on 37 shots.

In a matchup of the 2018 and 2019 Stanley Cup champions, all six goals were scored by a player who has hoisted hockey’s hallowed trophy.

Walker, who won the Cup with the Capitals four years ago after they drafted him in 2014, was only in the Blues lineup because of a combination of injury, illness, the salary cap and a move made before the trade deadline Monday. The only Australian player in league history, Walker scored in the NHL for the first time since Dec. 12 — his fifth goal of the season after a hat trick Dec. 9.

“He’s been outstanding all year for us, the way he comes in and just buzzes and makes an impact,” O’Reilly said. “That was a huge goal just going to the net hard and getting rewarded for it. All year he comes in, makes an impact for us, gives good life, good energy.”

There might be an opportunity to stick around for Walker, who fits the changing identity of the Blues as more of a skilled, high-scoring force than the knock-down, drag-out team that wore down opponents on the way to the franchise’s first title three years ago.

Kuznetsov extended his career-best point streak to 10 games. Wilson matched his single-season career high with 44 points with 15 games remaining before the playoffs.

The Capitals are heading there in the East, and the Blues are in strong position in the West. Each team plugged a new player — one a familiar face — into the lineup after making moves at the trade deadline.

Defenseman Nick Leddy made his Blues debut, going from the rebuilding Red Wings right into the thick of a playoff race.

NOTES: Each team dressed 11 forwards and seven defenseman. … Washington only had 11 healthy forwards on the roster because winger T.J. Oshie (lower-body injury) was out for a third consecutive game and center Nic Dowd (upper) missed his second in a row. … Tarasenko missed a second consecutive game with an illness.