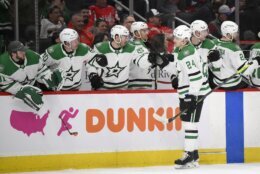 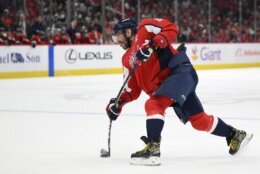 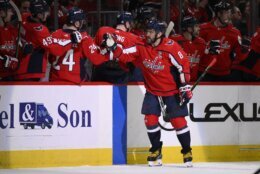 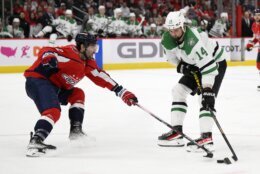 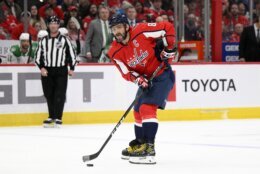 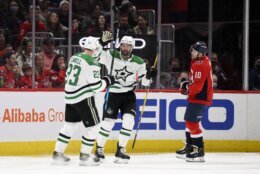 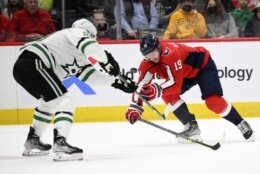 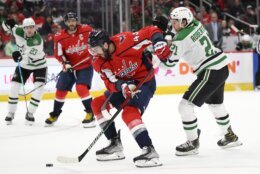 WASHINGTON (AP) — Roope Hintz scored twice on the power play to compensate for Alex Ovechkin’s 40th goal of the season, leading the Dallas Stars to an important 3-2 victory Sunday against the Washington Capitals.

The Stars won for just the second time in six games and moved one point back of the final playoff spot in the Western Conference. They have 21 games left, three more than the closest team they’re chasing: the Vegas Golden Knights.

“We all knew how important this game was for us,” goaltender Jake Oettinger said. “We’ve got to keep plugging away and try to win those games in hand that we have. To come into this building, obviously they’ve been playing really well, so to get a win is huge.”

Given their up and down play of late, it was important for the Stars to end this road trip with two points. They did so thanks to Hintz’s 24th and 25th goals of the season, Alexander Radulov’s fourth and 36 saves from Oettinger, who was playing on back-to-back days with Braden Holtby injured.

Hintz delivered that timely goal less than six minutes after Ovechkin fired a one-timer past Oettinger on the power play in the second period. The goal put Ovechkin in a tie with Wayne Gretzky as the only players to score 40 goals in a season 12 times and made Oettinger the 156th goalie the Capitals captain has scored on.

The Stars also got a few timely saves, most notably recovering to stop John Carlson with seven minutes left in the third period that was dominated by the Capitals. Washington outshot Dallas 14-2 in the third, wearing down a tired opponent to make it close and relying on Oettinger to be at his best.

With an assist on Ovechkin’s 770th career goal, Evgeny Kuznetsov extended his point streak to a career-high nine games. Despite a third-period goal by Dmitry Orlov, the Capitals had their point streak snapped at eight, losing in regulation for the first time since Feb. 28 after a 7-0-1 run since the calendar flipped to March.

The Capitals were without injured forwards T.J. Oshie and Nic Dowd and defenseman Trevor van Riemsdyk. Van Riemsdyk will miss at least the next two games after going on injured reserve.

They got a scare with 20.4 seconds left when Carlson took a spill into the boards after getting slashed by Stars captain Jamie Benn. Carlson was slow to get up and voiced his anger to officials before leaving the ice.

“That’s dirty,” coach Peter Laviolette said, adding he hopes the league looks at the play for a possible suspension. “They have to. That’s one of our best players.”

NOTES: Despite not being in uniform, Holtby got a video tribute and standing ovation during his first appearance at his old home arena since leaving in free agency in 2020. Holtby was drafted by the Capitals and played for them for a decade, winning the Vezina Trophy in 2016 and backstopping them to the Stanley Cup in 2018. His final games with Washington took place in a quarantined bubble in Toronto in 2020. … This was the Stars’ first game in Washington since Oct. 8, 2019. … Joel Hanley replaced Thomas Harley on the Stars blue line. Bowness cited too many goals against as the reason for scratching Harley.