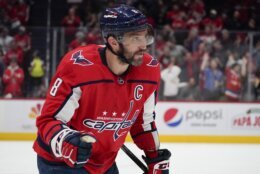 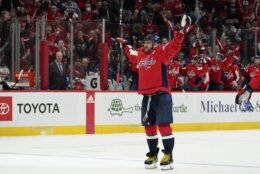 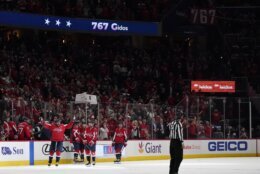 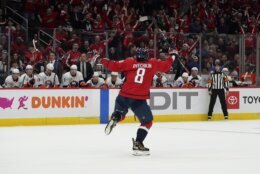 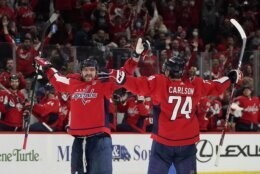 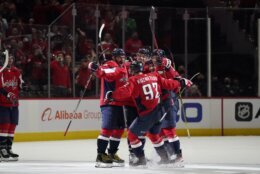 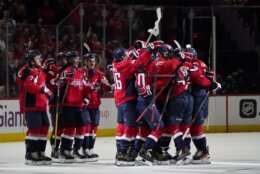 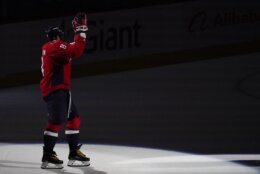 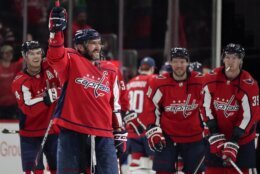 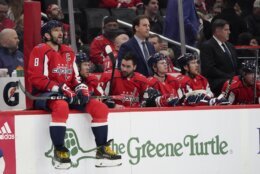 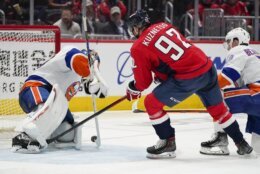 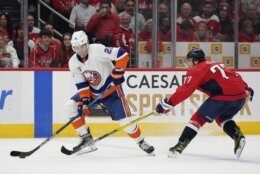 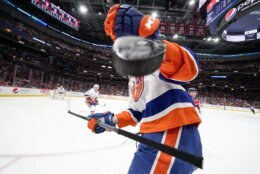 WASHINGTON (AP) — Alex Ovechkin danced around in the middle of the ice by himself after shooting the puck into the net once again.

He was not alone for long.

Seconds after Ovechkin scored his 767th goal to pass Jaromir Jagr for third on the NHL career list, he was surrounded by his Washington Capitals teammates while fans roared in approval. Chants of “Ovi! Ovi!” filled what has been his home arena for almost two decades, and they returned after a 4-3 victory against the New York Islanders that will be remembered more for Ovechkin’s latest milestone than the eight-round shootout that followed.

“I think everybody wants me to score that goal,” Ovechkin said. “Everybody involved with this milestone. I would say I’m very happy and thankful to be on this team for such a long time, especially with those guys.”

Ovechkin’s goal to move behind only legends Wayne Gretzky and Gordie Howie capped a turbulent stretch for the longtime Russia-born captain and the face of the Stanley Cup-winning hockey franchise in the U.S. capital. Amid his home country’s invasion of Ukraine ordered by Vladimir Putin, whom he has long supported, and with his wife and children stuck back home in Russia, Ovechkin got a brief chance on the ice to soak in the biggest individual accomplishment of his career.

“It’s been tough, but we’re athletes and we just have to do our job and focus in on the thing what we’re doing best,” Ovechkin said. “We just play hockey and enjoy our moment.”

Ovechkin’s moment came with 4:58 left in the third period when countryman Evgeny Kuznetsov won a faceoff to put the puck on his good friend’s stick. Ovechkin beat another good friend in Islanders goaltender Semyon Varlamov to finally break a tie with Jagr, whose unproductive Capitals tenure from 2001-04 made him unpopular among Washington fans.

The 36-year-old from Moscow has had no such issues at home, even since Putin invaded Ukraine last month. Booed at times during a trip across western Canada, Ovechkin got a standing ovation from Capitals fans who have cheered for him and chanted his name throughout his 17-year career in North America.

Ovechkin was quick to point out his sad reality that wife Anastasia and sons Sergei and Ilya Aleksandrovich were not among the crowd of 18,000-plus there to witness this goal.

The next important milestone for Ovechkin is No. 800 —a plateau only Gretzky and Howe have reached in hockey history. Ovechkin needs 35 goals to pass Howe and 128 to break Gretzky’s record of 894 that was long thought to be unapproachable.

Ovechkin scored in the shadow of the Capitals’ 2018 Stanley Cup banner with Barry Trotz standing on the visiting bench. Trotz coached Washington to their first title in franchise history, and Ovechkin was playoff MVP.

There have been plenty of doubters over the years that Ovechkin could keep scoring like this in his mid-30s and catch Gretzky. Trotz is not one of them.

“The one thing that I’ve learned about Ovi over my time is that when you doubt Ovi or you say he can’t do it, he digs in,” Trotz said. “He just digs in and is determined on that. And I think over time he’s learned to train probably a little different. It’s pretty amazing.”

Ovechkin also is three goals away from reaching 40 for the 12th time in his NHL career. That would tie Gretzky for the most 40-goal seasons in history.

“For now, he just friend, teammate,” Kuznetsov said while sitting next to Ovechkin. “He’s so close to us, and we never even talk about (how he has) accomplished all those milestones. I’m pretty sure one day when I’m going to retire, I hope he’s going to be still friends with me, we’re going to sit somewhere and think about and remember some of those milestones.”

In a pre-taped congratulatory video message, Jagr joked that Ovechkin better keep this up because he hasn’t yet hung up his skates.

“Keep scoring, because, as you know, I didn’t retire from hockey yet and there’s a chance I might come back to the NHL and start chasing you,” said Jagr, who’s still playing at age 50 for the team he owns in the Czech Republic.

Ovechkin said Jagr would have been further up the list if not for a three-year stint in the Russia-basked KHL. But Ovechkin has also lost time to two lockouts and the pandemic that makes his climb even more impressive.

Under contract until age 40, Ovechkin at his current pace this season would need to average 29 goals over the next four years to pass Gretzky before his current deal expires.

NOTES: Washington rookie Axel Jonsson-Fjallby scored his first NHL goal and joked about Ovechkin, “I’ll probably beat him.” Anthony Mantha also scored in the first period and the shootout for the Capitals, who got 29 saves from Vitek Vanecek and are 5-0-1 in their past six games. … Brock Nelson, Kyle Palmieri and Anders Lee scored for the Islanders, whose winning streak ended at three. Lee’s goal with 1:59 left sent the game to overtime after Ovechkin gave the Capitals the lead.