WASHINGTON (AP) — Marc-Andre Fleury stopped Alex Ovechkin in the shootout after Seth Jones tied it midway through the third period and the Chciago Blackhawks rallied past the Washington Captials 4-3 Thursday night.

Patrick Kane scored the shootout winner, and Fleury got some assistance from his goalposts to help Chicago win for the third time in five games. The Blackhawks have won seven of 10 games since Derek King took over as interim coach when Jeremy Colliton was fired.

The Capitals lost by blowing a lead for the second time in two games. They coughed up a 4-1 lead and fell in regulation at Florida on Tuesday.

Washington will take the point from reaching overtime but fell to 0-7 in games this season that went past regulation. This was the Capitals’ first shootout of the season.

It probably should not have gotten that far. Garnet Hathaway put the Capitals ahead 57 seconds into the third period, but Jones fired a laser through traffic that tied the score at 3.

It was the Stars’ sixth consecutive win and seventh straight at home. They have outscored their opponents 21-7 during the winning streak.

Jake Oettinger made 20 saves and improved to 5-0. It was just the second time this season he allowed two goals.

Emergency starter Daniil Tarasov stopped 34 shots for the Blue Jackets. Boone Jenner and Alexandre Texier had the goals for Columbus, outscored 15-5 while losing the first three games of its road trip.

Norris pushed in a rebound with 5:54 left and the Senators hung on for their league-low fifth victory of the season.

Anton Forsberg made 47 saves for Ottawa in his seventh game with the Senators and 63rd of his career. He previously played for Columbus, Chicago and Carolina.

Teuvo Teravainen scored with 7:58 left on what was the 42nd shot of the game for the Hurricanes. Andrei Svechnikov tied it with 6:13 to go. Antti Raanta, who suffered his first regulation loss of the season in five decisions (3-1-1), made 17 saves for Carolina.

SUNRISE, Fla. (AP) — Anton Lundell scored twice, including the go-ahead goal, and Florida came back from three down for the second straight game to beat Buffalo.

The Panthers trailed 3-0 after the first period and 4-1 in the second. They also climbed out of a 4-1 hole to beat Washington 5-4 on Tuesday, making Florida the ninth team in NHL history to overcome a three-goal deficit in consecutive games.

Sergei Bobrovsky allowed four goals on 12 shots before being replaced by Spencer Knight with 8:44 left in the second period. Knight stopped all 19 shots he faced.

Tampa Bay also got goals from Ondrej Palat and Anthony Cirelli, and Andrei Vasilevskiy made 26 saves.

St. Louis starting goaltender Jordan Binnington and defenseman Justin Faulk were placed into COVID-19 protocols before the game. They joined center Tyler Bozak, who went on the list Tuesday.

The Blues recalled goalie Charlie Lindgren from Springfield of the AHL, but due to salary cap issues, he can’t join the team until Friday. St. Louis had former Grand Valley State player Kyle Konin as the emergency backup goalie. The 23-year old resides in the Tampa area.

Swayman’s shutout was his first of the season and third of the rookie’s NHL career. After stopping 26 shots over the first two periods, Swayman was heavily tested in the third. Among his best saves in the final frame came when he denied Matt Duchene from the slot with the Predators on a power play.

Juuse Saros made 31 saves for Nashville, which has dropped two of three.

Nick Bonino also scored and Timo Meier had two assists for the Sharks, who have won three straight and five of six. Adin Hill made 24 saves.

Mathew Barzal scored early for the Islanders and Ilya Sorokin stopped 33 shots. New York, which had lost eight straight in regulation, is winless in five games at UBS Arena, its $1.1 billion new home next to Belmont Park.

In the extra period, Karlsson skated up on a 2-on-1 before passing to Meier, who cut from left to right across the front of the net but couldn’t get a shot off. Meier then passed the puck back from the right side across the front and Karlsson put it past Sorokin for his fifth of the season.

ST. PAUL, Minn. (AP) — Kirill Kaprizov had two goals and an assist as Minnesota kept rolling with a win against New Jersey.

Ryan Hartman had a goal and two assists, and Rem Pitlick and Dmitry Kulikov also scored for Minnesota, which has won five games in a row and is the NHL’s highest-scoring team since Nov. 2 with 64 goals in 15 games.

Kaapo Kahkonen made his second straight start in net for the Wild and finished with 29 saves.

MONTREAL (AP) — Cale Makar scored to put Colorado ahead to stay late in the second period, Valeri Nichushkin had a goal and an assist, and the Avalanche beat Montreal.

Andre Borkovsky and Gabriel Landeskog also scored for the Avalanche, who bounced back from an ugly 8-3 loss at Toronto a night earlier.

Colorado opened the scoring with a short-handed goal in the second period. Loan O’Connor passed to a wide-open Nichushkin in front of the net.

Matthew Tkachuk had a goal, Jacob Markstrom make 40 saves and the Flames improved to a league-leading 10-2-2 on the road.

Alex Edler got his 100th career goal and Alex Iafallo also scored, but the Kings lost for the seventh time in eight games. Cal Petersen made 29 saves. 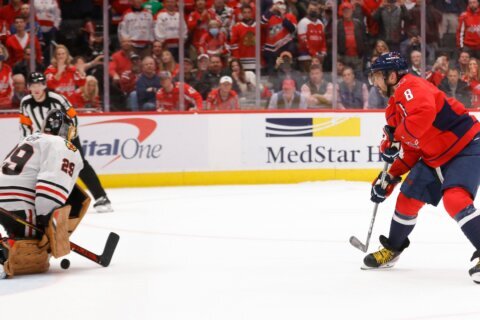 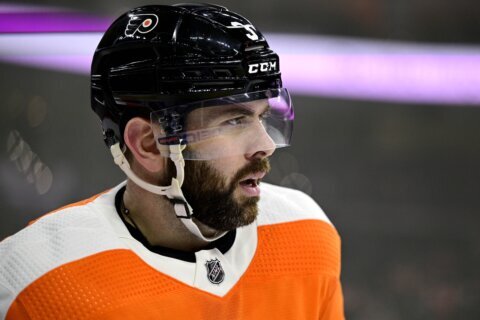 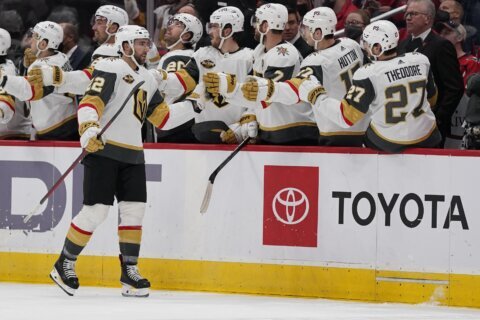