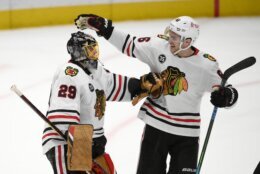 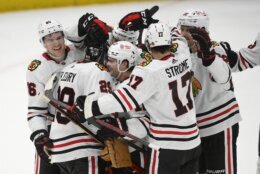 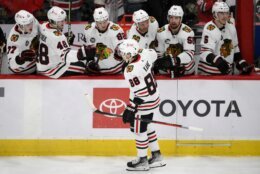 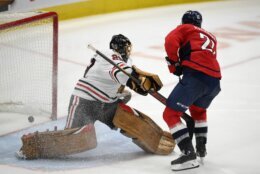 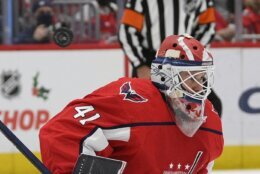 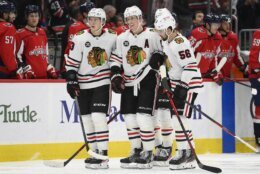 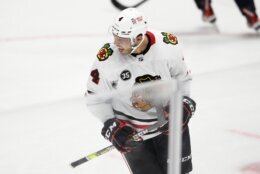 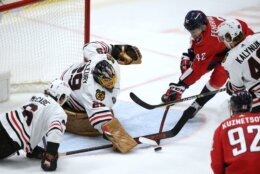 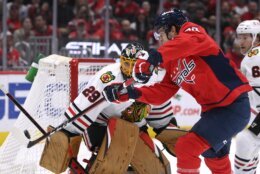 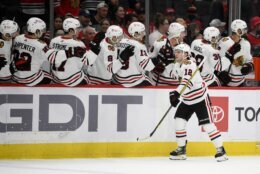 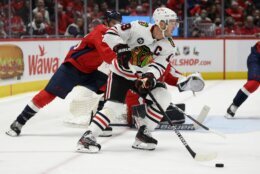 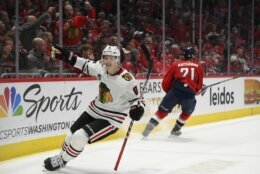 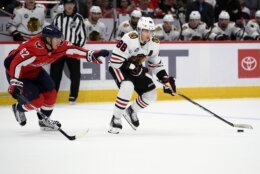 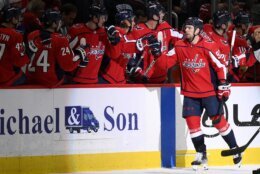 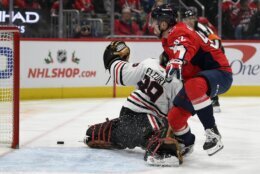 WASHINGTON (AP) — Chicago Blackhawks coaches challenged players at the second intermission to see what they could do with the score tied against one of the NHL’s best teams.

They took a quick punch to fall behind, fought back to tie it on Seth Jones’ goal midway through the third period and beat the Washington Capitals 4-3 in a shootout Thursday night. Patrick Kane scored the shootout winner, Marc-Andre Fleury stopped Alex Ovechkin after getting some help from his goalposts and Chicago won for the third time in five games.

“We stayed in the fight,” interim coach Derek King said. “That’s a good hockey team: big, fast, skilled. It was a challenge for us, and they tilted the ice here and there but we stuck to our game plan.

“We just kind of played as simple as we could. We still made some mistakes where I would’ve liked to see pucks go in a little deeper but stayed in the fight and it was a challenge for us and they rose to the occasion.”

The Blackhawks have won seven of 10 games since King took over when Jeremy Colliton was fired. They’ve embraced a tight-checking mentality that gives them better chances to win against more talented competition, a style that paid off against Washington.

The Blackhawks easily could have folded when Garnet Hathaway scored fresh out of the penalty box on a breakaway 57 seconds into the third, but they hung right with the Capitals and were rewarded when Jones fired a laser past Vitek Vanecek with 8:04 left in regulation.

“Throughout the game we had some ups and downs like any other game, but we stuck with it,” said Jones, whose goal was his third of the season. “We were resilient in the way we wanted to play, and it took us to the very end to get a win.”

After surviving overtime, Fleury rubbed each of his goalposts after shots from Evgeny Kuznetsov and Daniel Sprong rang off each one in the shootout. Kane beat Vanecek for the only goal of the shootout to drop Washington to 0-7 this season in games that have gone beyond regulation.

“We had two guys go and hit the post twice,” coach Peter Laviolette said after the Capitals’ first shootout this season. “It’s a game of inches.”

The Capitals lost by blowing a lead for the second time in two games. They coughed up a 4-1 lead and fell in regulation at Florida on Tuesday and at least emerged with a point this time.

“The last two games we made mistakes in the third,” said forward Nic Dowd, who scored in the first and assisted on Hathaway’s goal. “I just think we need to tighten that up and realize we don’t need to score another goal. Just continue to play defense, get pucks out.”

Ovechkin hit the post and missed high on a couple of his best opportunities to score his 750th career goal, but he still made a major impact on the game. He picked up the only assist on Kuznetsov’s goal and delivered a big, momentum-shifting hit on Chicago defenseman Connor Murphy.

Washington captain now has the same number of goals and assists as part of his team-leading 38 points through 24 games.

Alex DeBrincat scored his 13th of the season, and Dominik Kubalik ended a 15-game goal drought for Chicago. Fleury stopped 25 of the 28 shots he faced in regulation and overtime.

Despite losing Murphy for the final two periods and overtime and finishing with five defensemen, the Blackhawks won in Washington for the first time since Jan. 10, 2006, ending an eight-game skid.

“Thought we limited them to some chances and obviously we scored on some of ours,” DeBrincat said. “It was a good game overall, and it’s good to get a win on the road.

NOTES: The team did not specify what Murphy’s injury was, and King did not have an update afterward. … Blackhawks forward Josiah Slavin assisted on Jones’ goal in his NHL debut. A younger brother of Carolina Hurricanes defenseman Jaccob Slavin, Josiah got the solo lap treatment prior to warmups, skating on his own before being joined by Fleury and the rest of his teammates. … Capitals goaltender Vitek Vanecek made 25 saves in regulation and OT. … Winger Daniel Sprong returned to Washington’s lineup after being a healthy scratch the past two games. 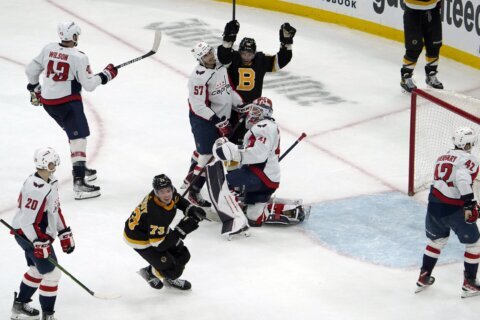 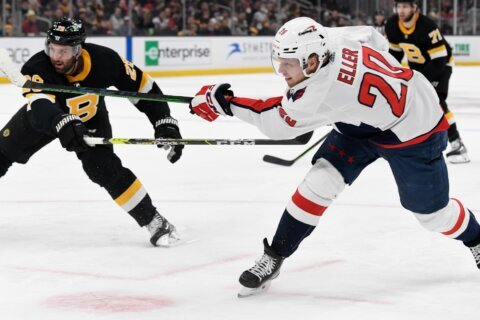 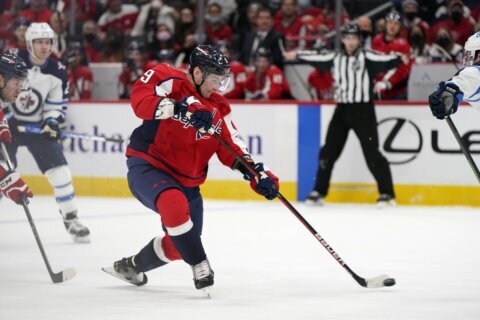