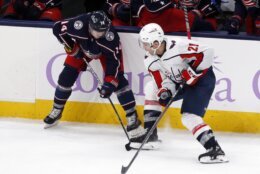 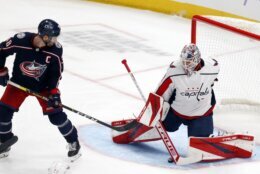 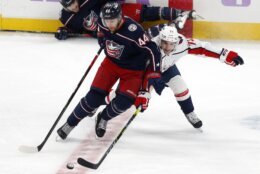 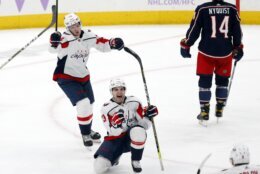 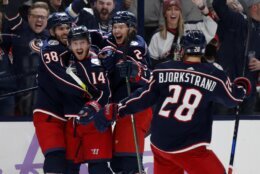 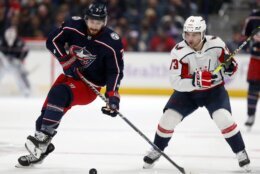 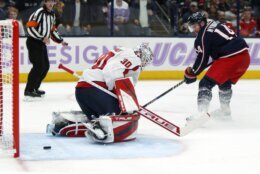 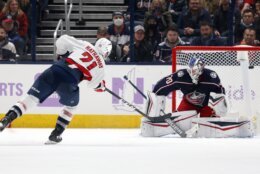 “You got to like the perseverance, playing and traveling last night, and guys stepping up and getting it done in the third period, and winning in regulation,” Capitals coach Peter Laviolette said.

Ovechkin’s laser shot from the right circle at 10:19 of the first period tied the score 1-1 with his league-leading 12th goal of the season. Ovechkin broke a tie with Bobby Hull for fourth on the NHL’s all-time goals.

“It’s means a lot,” Ovechkin said. “When you start playing hockey, and you came to the NHL, you never thought you’d be in that position with those names. It’s a special moment for me, my parents, my brother, my wife, kids.”

Hathaway gave Washington a 2-1 lead 24 seconds into the second period off a pass from Axel Jonsson-Fjallby. He got his second second of the night and second of the season on a breakaway at 7:23.

“The first three goals, we turned the puck over three times,” Blue Jackets coach Brad Larsen said. “When you force plays against a dangerous team, they make you pay, and they did–three times.”

Kuraly pulled the Blue Jackets within one with his second of the night at 8:11, over a sprawling Martin Fehervary. Jakub Voracek’s assist was his team-leading 11th of the season and extended his assist streak to four games.

Nyquist tied the score 22 seconds later with his second of the season and first since opening night. Assists from Oliver Bjorkstrand and Boone Jenner extended their point streaks to four games each.

Kuraly got Columbus on the scoreboard with his first with the Blue Jackets, burying a bouncing rebound from Alexandre Texier 2:33 into the game.

Next in the sights of Ovechkin on the all-time scoring list is Jaromir Jagr with 766 goals. The top two scorers in league history are Wayne Gretzky with 894 and Gordie Howe with 801.

THIS FIGHT IS PERSONAL

Columbus hosted the club’s annual Hockey Fights Cancer Night on Friday, a personal fight for Larsen, who has undergone treatment for melanoma and testicular cancer.

Friday’s game in Columbus was the Capitals first visit to Ohio’s capital city in nearly two years, having last dropped a 3-0 decision to the Jackets there on Dec. 16, 2019. 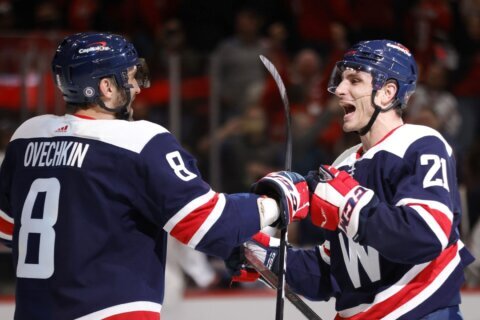